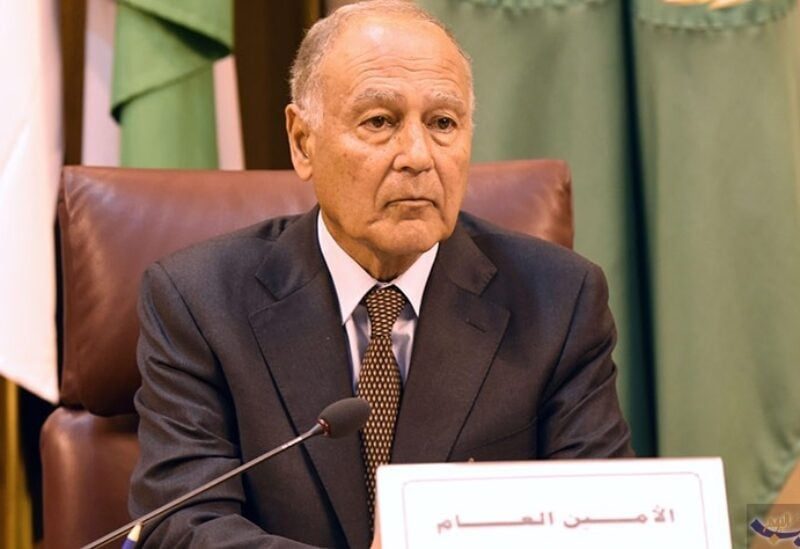 The Secretary-General of the League of Arab States, Ahmed Abu al-Gheit

The Lebanese flag was lowered to half mast at the Baabda Presidential Palace, and a memorandum was issued to remove former President Michel Aoun’s photograph from offices and halls in official departments, following the protocols adopted at the end of the presidential term.

Arab and international officials reiterated their calls to elect Aoun’s successor as soon as possible to prevent a prolonged power vacuum.

The EU recalled sanctions that may be taken against individuals or entities that would prevent Lebanon from emerging from its crisis.

“The Arab League stands by the Lebanese government,” Secretary-General of the Arab League Ahmed Aboul Gheit said after meeting Lebanese caretaker Premier Najib Mikati in Algeria ahead of the 31st Arab Summit.

Aboul Gheit further stressed the importance of doing everything necessary to hold the Lebanese presidential elections on time.

“Lebanon seeks the best relations with the Arab brothers,” Mikati said, calling on the Arabs to “understand the Lebanese situation and support Lebanon.”

The EU’s high representative, Josep Borrell, said in a statement: “After four inconclusive rounds of parliamentary votes, no candidate was elected and the presidency of Lebanon is now vacant.

Since the last general elections in May, no government was formed. Such a political vacuum is occurring while Lebanon is facing a deteriorating socioeconomic situation. Institutional volatility compounded with economic instability would pose serious risks for Lebanon and its people.

“The EU once again calls on the Lebanese leadership to organize presidential elections and form a government with the utmost urgency. In July 2022, the EU renewed a sanctions framework that allows imposing restrictive measures on individuals or entities blocking an exit from the Lebanese crisis. To facilitate the disbursement of the additional international funding and reverse the deteriorating trend of the Lebanese economy, a disbursing agreement with the International Monetary Fund must be reached, and key, long overdue reforms must be undertaken without any further delay.”

The EU stressed its commitment to continue to assist Lebanon and its people to move forward toward the recovery and stability they deserve, provided that Lebanese leaders assume their responsibilities and take the necessary measures.

The French Embassy in Lebanon retweeted a post by the French Ministry of Foreign Affairs saying: “The serious and unprecedented crisis in Lebanon requires the proper and full functioning of all its institutions. In this context, France calls on the Lebanese deputies to elect, without delay, a new president.”

The Russian Embassy in Lebanon hoped that “the friendly people of Lebanon will succeed in overcoming the current difficult stage, which can only be achieved within the framework of a joint constructive action, in which everyone’s opinion is taken into account and without external interference.”

Speaking from Algeria, Mikati reiterated: “The caretaker government should run the country normally without provocation, provided that the priority remains to elect a new president and form a new government, and that cooperation and harmony exist between them.

“In the event of any emergency, I will consult the ministers before making any decision regarding holding a Cabinet session. If the quorum is secured, the session will be held and decisions are taken by a two-thirds majority. I hope that everyone will cooperate so we can overcome this difficult stage.”

Saudi Ambassador to Lebanon Walid Al-Bukhari said that Saudi-Lebanese relations will improve further once a new government is formed and a sovereign president is elected to restore the confidence of Saudi Arabia and the countries concerned with the Lebanese issue.

The UN’s special coordinator in Lebanon, Joanna Wronecka, announced that she met with Hezbollah’s Arab and international relations officer, Ammar Al-Moussawi, and discussed ways to quickly end the presidential vacuum and form a new government.

Top officials participated in a program on Tuesday, officially closing the presidential pavilion at the Baabda Palace as Aoun’s term ended without a replacement, lowering the Lebanese flag to half mast, and shutting off the water fountain.