Army Command: Meeting with the Saudi ambassador did not take place

One of the local newspapers reported this morning about a meeting that took place away from the media between the Armed Forces Commander General Joseph Aoun and the Saudi ambassador to Lebanon Walid Al-Bukhari about the content of an alleged conversation between them.

It is important for the army leadership to clarify that all meetings of the army commander are announced by official statements issued daily on the official army website, and that the meeting with the Saudi ambassador did not take place, as the newspaper claimed, and the leadership affirms that it welcomes any meeting aimed at supporting the military institution, especially in these exceptional circumstances.

The Army Command calls on the media to be careful in reporting news related to the military establishment and to refer to it to verify the information before publishing it. 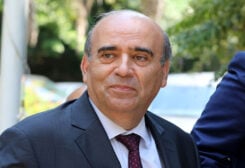