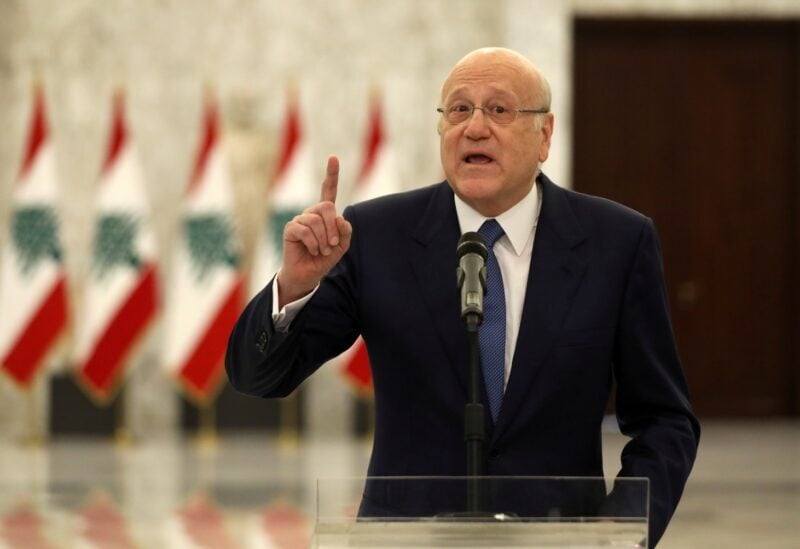 Prime Minister Najib Mikati on Tuesday commended the perseverance of the Lebanese army, “which is fully carrying out its mission to preserve security, stability, and peace in Lebanon despite the difficult financial and social conditions experienced by the military institution.”

“This proves that the national loyalty of the army comes first, and this is what guarantees that our country will endure no matter what difficulties it faces,” Mikati said.

The Prime Minister’s words came before Lebanese Army Commander, General Joseph Aoun, who visited him with an accompanying delegation.

“We join our hands with those of the army, and we support the steps it is taking; we are exerting all the required efforts to help the Army overcome this difficult stage, as this is a fundamental constant to safeguard Lebanon and its people from danger,” Mikati said.

“The army will remain the first bastion of defense for Lebanon, and the first institution that represents true diversity among all the Lebanese,” the PM added.

Separately, the Prime Minister welcomed the Minister of Public Health, Dr. Firas Abiad, with whom he discussed the most recent developments surrounding the rampant spread of the coronavirus.

Following the meeting, the Health Minister said that talks with the Prime Minister mainly focused on epidemiological situation in Lebanon.

“The daily numbers of coronavirus infections are increasing; thus, we are concerned about the situation of hospitals although it’s still under control,” Abiad said.

“We have discussed a number of measures taken by the Ministry to face the pandemic, including the opening of a field emergency hospital for coronavirus patients at BIEL area using  the equipment provided by the United Arab Emirates to Lebanon,” the Health Minister said.

“We have also touched on a number of issues involving hospitals and their readiness. We have increased the number of hospital beds by approximately 30 percent so far, and we are working on further increasing the numbers just in case the epidemiological situation requires that. The issue of closures nationwide has been raised, but so far, we are making every effort not to get to this point,” the Health Minister explained.

As for the situation of schools, Abiad said that he had met with the Minister of Education to discuss this issue and to take the appropriate decision with this regard.

“Of course, we are very keen on the continuation of the school year, especially since we’ve already suspended two academic years, and any additional disruption may have a severe impact on our students, but we must make sure that the return to schools after the holidays will be implemented properly through more vaccinations among students, administration, and teachers,” Abiad added.

Mikati later met with Minister of Justice, Henry Khoury, and then received a delegation representing the Democratic Gathering.

The Democratic Gathering delegation distributed a statement about its meeting with Mikati, in which it indicated that the meeting had reviewed the country’s latest political developments, most importantly the sustainable provision of electric supply and maintenance of water pumping stations that feed the villages and towns of Aley and Upper Metn regions.