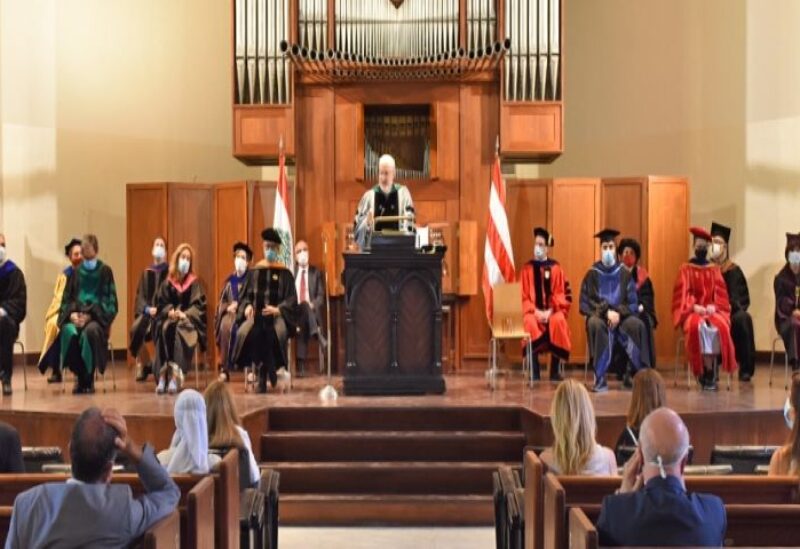 On the occasion of the official opening of the 2021-22 academic year at the American University of Beirut (AUB), a ceremony was held at the university’s historic Assembly Hall.

Due to the continuing conditions of the COVID-19 pandemic, the event was attended by a limited audience including trustees, deans, leadership, faculty, staff, and students. All members of the AUB community, family, and friends were invited to attend online.

Entry of the traditional Academic Procession, comprising the president, deans, faculty members, and trustees signaled the beginning of the university’s 156th Opening Day ceremony. This was followed by the Lebanese national anthem and AUB’s alma mater. Dr. Fadlo Khuri, AUB president, then addressed the audience and viewers with his customary Opening Day speech, this year titled “The Invincible Summer.”

Khuri began by welcoming everyone and pointing out that “While no two years are alike, this is an Opening Day unlike any other.” He spoke about how the planned-for return of students and faculty to campus brings hope, and a sense of agency without minimizing the challenges AUB, Lebanon, and the world have been facing. Khuri highlighted that “one thing has become crystal clear over the last 24 months to many of us: the American University of Beirut must fundamentally transform if it is to continue to persist and thrive. And persist and thrive we must. The stakes are simply too high, and this university is too important for us to fail.”

He added, “For the last three years, the crises, including national financial collapse and a once in a century global pandemic, have accelerated and worsened. Throughout, the Board of Trustees, university leadership and I have listened, absorbed, debated, and deliberated how to forge a path forward for this most precious of universities, one whose existence provides diversity, hope, opportunity, purpose, and indeed life to its community.”

He continued, “We firmly believe that path forward starts with careful, critical self-examination and a realistic appraisal of our mission, its relevance, and resilience in an era and a culture of change.”

Looking to history for lessons that might be useful, Khuri contrasted the leadership styles of two very different leaders of Ancient Greece: Demosthenes and Pericles. Whereas Demosthenes was a superb orator, it was his hubris that eventually led to the downfall of Athens. Khuri then looked at the leadership of Pericles who, in his famous Funeral Oration, exhorted the people of Athens to rally and fight for their democratic city-state against the stronger Spartans. “While Pericles did not provide a distinct path forward in his Oration, his example inspired the men of Athens to fight. We must also resist and persist, albeit using peaceful methods, if with no less determination than the ancient Athenians. AUB and Lebanon are well worth rallying, fighting, and staying for,” Khuri said.

He added, “AUB’s purpose is to empower generations, to serve and care for those less fortunate, to heal the ill, to bind the wounds of individuals and society alike, all while we pursue excellence for the greater good of mankind, and for the peoples of the region we have served with distinction and fidelity for over a century and a half. To avoid mission drift and abjure straying from our purpose, we will first secure our base, our home campus. At AUB, we provide hope, purpose and continuity.”

Khuri spoke about the recent launch of the inclusive 3-year, $150 million Road to the Highway strategy, AUB’s Board Designated Professorships and Medical, Staff and Faculty Heroes Programs. “We insist on supporting every member of our AUB community, to the greatest extent of our ability, while remaining sustainable as an institution. This will allow many to stay and continue to advance in their careers at AUB while sparing them the unenviable choice between serving our shared mission and providing for and protecting their nuclear families. It is also vital that we ensure our world class AUBMC has adequate medications, fuel, and supplies for our physicians, nurses, and staff to perform their vital, lifesaving work.”

Khuri continued, “Our students, faculty and staff expect a great deal from this university, and we must strive to always live up to that, including doing everything possible to return our students stranded in Afghanistan, to serve our diverse learning community during the pandemic and Lebanese crisis in order that they continue their journey of discovery, all while maintaining and continuously improving our educational standards.”

He added, “We will reinvigorate the experience of our students through an enriched curriculum where experiential learning interdigitates with the liberal arts and scientific education that AUB is rightfully renowned for. We do so such that, armed with an AUB education, our students will be prepared and predisposed to serve the beleaguered societies of the world, societies challenged by war, unemployment, an absence of social freedoms, lack of participation in the governance of their nations and, most damning of all, a loss of hope for a better tomorrow. These societies and the people who comprise them can be transformed by individuals who are privileged to attend our great university, such that they too ‘may have life and have it more abundantly’.”

He said, “A defining feature of our ethos is that we are deeply acculturated in our home.” He added, “We serve the peoples of Lebanon and the region. And no set of circumstances, no threat or harm will force us to abandon our sacred charge.”

He added, “With uncertainty surrounding the socio-economic and political decline that Lebanon is experiencing, it is our manifest duty to enhance the connectivity between Lebanon, its immediate region and the world. To further diversify, over the course of the next 12 to 24 months, we hope to launch new AUB campuses, one to the West and one to the East of Lebanon. These campuses will allow the interchange of ideas, knowledge and purpose with our campus in Beirut, and spread the unique culture of our magnificent university, enhancing both AUB’s diversity and its excellence simultaneously. By extending beyond Lebanon to reach the many who deserve the unique brand of AUB’s education, we fulfill our mission, bringing the ethos of this university to the peoples of the region and the world. By introducing that which is most meaningful and enduring in the unique culture of this great research intensive, liberal arts university, itself deeply rooted and acculturated in Beirut, more broadly to the wider world, we preserve much of what is most worthwhile about Lebanon, extending its influence and identity beyond its shores.”

He then said, “Only dinosaurs, figurative and literal, stand still, and all know their fate. As we immerse ourselves in transforming this great university, we do so in the understanding that the alternative is chilling, exemplified by Franz Kafka’s dark tale of counter-evolution, Metamorphosis. Should we at AUB oversleep the clarion call to academic evolution, we will be condemned with the cockroaches of history. It is to ward against the counter evolution in liberal thought, invoked by those who wish to impose their own values on others rather than persuade them to engage in a shared destiny, that AUB exists. And why it will long endure.”

Khuri added that during AUB’s transformation, the university counts on the support of its friends across the globe, including alumni, governments, and foundations. He added that the severe economic collapse has impoverished the Lebanese such that more than 60% of them are below the Poverty Line and can no longer afford to pay full tuition for their children.  “We must all shoulder additional responsibilities, such that those outstanding students who are capable and suited to attend AUB but whose parents or guardians live in Lebanon, can attend for an affordable price, while those whose parents live and work abroad render their tuition in a more stable currency.”

Khuri quoted Albert Camus who said, “In the depths of Winter, I finally learned that within me there lay an invincible summer,” commenting that this quote was penned in a series of essays, published long after his death, in which Camus urged humanity to persevere through adversity, and which is timely advice for our peoples today. “This lies at the core of why we at AUB must more fully embrace and indeed exemplify our purpose. In the depths of each of our winters there lies an invincible summer.”

He concluded, “To pursue excellence for the greater good, saving lives whose values are immeasurable is never easy, all while empowering great minds, whose futures portend a better, fairer, more inclusive world. Now more than ever, as Camus also reflected, we must mend what we can, band together and pledge ourselves to causes far greater than ourselves.”