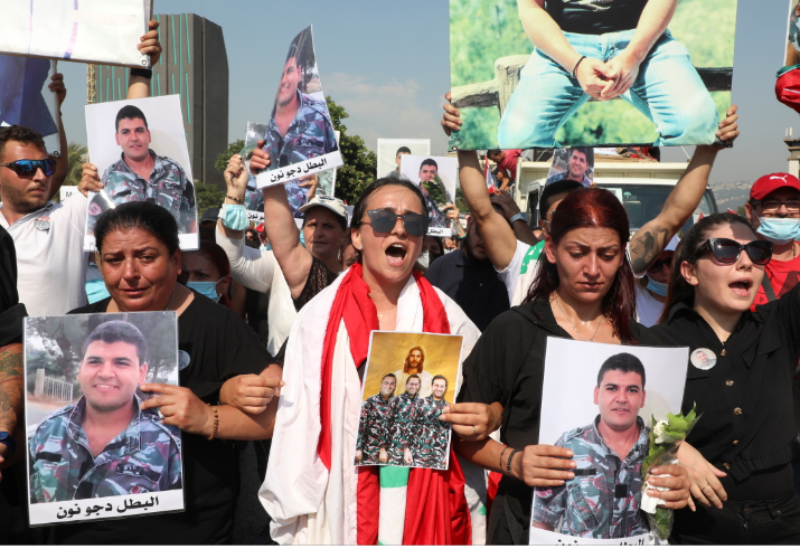 On the first anniversary of a horrific explosion at the port, thousands of Lebanese rallied in Beirut on Wednesday, holding photos of the deceased and demanding justice.

No senior official has been held accountable for the accident, which was caused by a large quantity of ammonium nitrate kept unsafely at the port for years, alarming many Lebanese as their country faces financial ruin.

Water cannon and tear gas were shot at demonstrators throwing stones at police personnel near parliament as a mourning service began at the port, according to live TV footage. According to a security source, six persons were injured.

Two persons were injured in scuffles between supporters of competing parties in the surrounding Gemmayzeh neighborhood as the crowds grew, according to a security source. Shots from a gun were fired into the air.

The explosion was one of the largest non-nuclear explosions ever recorded, killing over 200 people and injuring hundreds more. It was felt more than 240 kilometers (150 miles) distant in Cyprus.

Immunity demands for prominent lawmakers and former officials have been denied, slowing the probe. All of the people detained by Lebanese investigators have denied any wrongdoing.

“We will not forget and we will not forgive them ever. And if they can’t bring them to account, we will by our own hands,” said Hiyam al-Bikai, dressed in black and clutching a picture of her son, Ahmad, who was killed when masonry fell on his car.

“Hostages of a Murderous State,” read a large banner on a structure overlooking the port.

Emmanuel Macron, the French president who has spearheaded Western pressure on Lebanon’s authorities to reform, said the country’s leaders owed the people the truth and heaped further condemnation on the ruling elite for failing to cope with the economic crisis.

Much of Beirut has been damaged, and the devastation is still visible. The harbor looks like a bomb site, with a massive grain silo that hasn’t been restored.

Thousands of people descended on the port and surrounding regions, many waving Lebanese flags.

Lebanese army helicopters flew overhead giving off red and green smoke – the national colors – as koranic verses were recited at the memorial service in the port, where a mass was due to be held. Names of the victims were read in commemoration.

“Because you destroyed our future, accountability is coming,” declared one banner.

According to a report released this week by Human Rights Watch, there is clear evidence that some Lebanese officials were aware of and implicitly accepted the deadly hazards posed by ammonium nitrate.

According to Reuters, Prime Minister Hassan Diab and President Michel Aoun were both told that the chemicals presented a security danger and could destroy the capital if they burst in July of last year.

Aoun has stated that he is willing to testify if necessary and that he supports a fair investigation.

Diab, who resigned following the bombing, has stated that he had no regrets.

The chemicals arrived on a Russian-leased cargo ship that made an unscheduled stop in Beirut in 2013. An FBI report seen by Reuters last week estimated around 552 tones of ammonium nitrate exploded, less than the 2,754 tonnes that arrived.

That discrepancy is one of the many questions that remain unanswered. No one ever came forward to claim the shipment.

Leading prayers at a hospital that was badly damaged in the blast, Greek Orthodox Archbishop Elias Audi said the investigation must continue until punishment is meted out to those who deserve it.

Nobody was above the law, he said, and “whoever obstructs justice is a criminal, even if they are highly placed”.

At the time of the explosion, Lebanese were already facing deepening hardship due to the financial crisis caused by decades of state corruption and waste.

The meltdown worsened throughout the last year with the governing elite failing to establish a new cabinet to start tackling the crisis even as poverty has soared and medicines and fuel have run out.

“Lebanese leaders appear to be betting on a stalling approach,” he said. “I lament this and believe it is a historic and moral failure.”

Pope Francis wished Macron well and urged donors to assist Lebanon in its “resurrection.” He expressed a strong desire to travel to Lebanon, where many people have lost “even the illusion of existence.”

The state has taken no measures toward economic reforms, and the sectarian elite is involved in a power battle over cabinet positions.