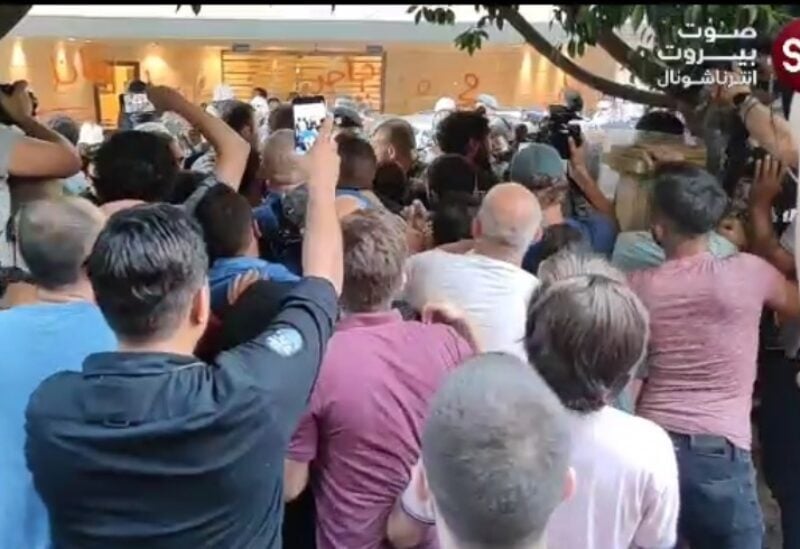 A mass of activists held a sit-in near Parliament to demand that all defendants in the Beirut Port Blast case have their immunity lifted.

Traffic was blocked off at the Beirut Commercial Center Street and diverted to the sea line, according to the “Traffic Control” center.

This sit-in takes place at the same time as a protest by the families of the martyrs of the port explosion, who marched from Martyrs’ Square to the home of Mohamed Fahmy, the caretaker government’s Minister of Interior.

During the event, the families of the port victims startled Minister Fahmy’s security by storming the minister’s building carrying symbolic coffins.

Following a riot between the two parties, a number of wounded from the families of the port’s martyrs were beaten by security forces.

“The Lebanese people have come to support us, where are you, hero?” a demonstrators yelled mockingly through a megaphone.

Scuffles ensued with police, who repelled protesters from the building entrance after firing tear gas, but the crowd refused to leave the area and tensions rose as more riot police arrived at the scene, witnesses said.

Parliament has yet to decide whether to lift the immunity of former finance minister Ali Hassan Khalil, former public works minister Ghazi Zeaiter and former interior minister Nohad Machnouk in connection with the port inquiry, after adjourning proceedings on Friday to seek more information from the judge.

Bitar became the lead investigator into the blast after his predecessor, Judge Fadi Sawan, was removed in February following requests from two former ministers whom he had charged with negligence over the blast.