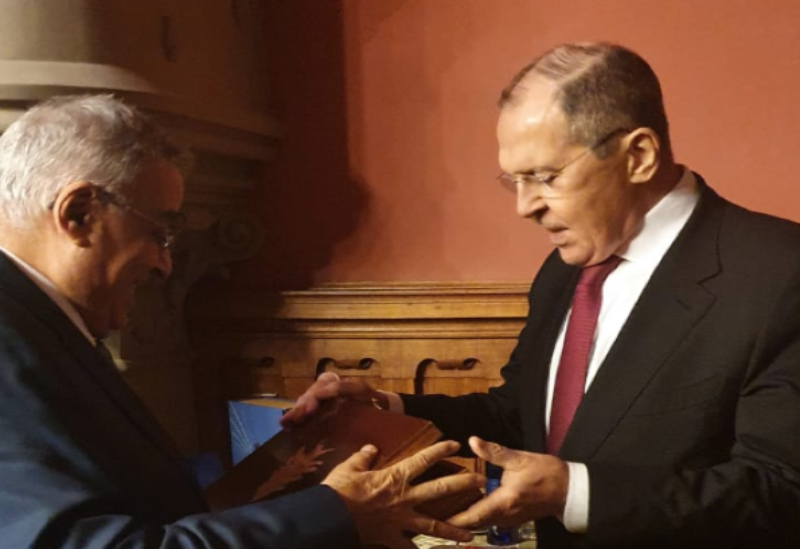 Foreign Affairs and Emigrants Minister, Abdallah Bou Habib, met today at the guest house of the Russian Ministry of Foreign Affairs, with his counterpart Sergey Lavrov, with talks touching on the relations between countries, the regional and international conditions, and most importantly the reform steps the Minister is working on in Lebanon.

Following their three and a half hour meeting, which included a working lunch, Bou Habib said: “We expressed our gratitude and appreciation for being handed the satellite images of the Beirut port explosion on August 4, 2020, and we will place them in the custody of the Lebanese judiciary, hoping that this will contribute to revealing the truth about this tragedy that befell Lebanon.”

“We presented our situation in Lebanon in light of the political and economic challenges, and we touched on the most important steps that are underway in this regards, including the agreement on a support program with the International Monetary Fund, which coincides with carrying out necessary reforms especially in the electricity and banking sectors, and restructuring the public sector,” Bou Habib added.

He went on to state that discussions during the meeting also tackled “ways to activate bilateral agreements in a way that enhances cooperation between Lebanon and Russia,” noting that “Minister Lavrov assured us of his encouragement to Russian companies, including those operating in the energy and oil sectors, to work in Lebanon.”

“I had the honor of being briefed by Minister Lavrov on a number of international and regional issues, including his vision of the Syrian crisis to bring peace and preserve the unity and sovereignty of the Syrian territories, emphasizing that the future of Syria is determined by the Syrian people,” Bou Habib indicated.

He stated that he highlighted Russia’s significance and centrality in achieving the desired goals, and its ability to help secure the safe, dignified and rapid return of the displaced Syrians to alleviate the enormous burdens on Lebanon. “We welcomed Russia’s helpful role in communicating with regional partners. We hoped that Russia would continue its good efforts with its friends in the region to reduce escalation and tension, which would positively impact Lebanon’s stability and internal conditions,” Bou Habib maintained.

“I extended an invitation to Minister Lavrov to visit Lebanon to have a closer look at the situation in order to pursue consultations and discussions, and he promised to visit soon,” the Foreign Minister concluded.