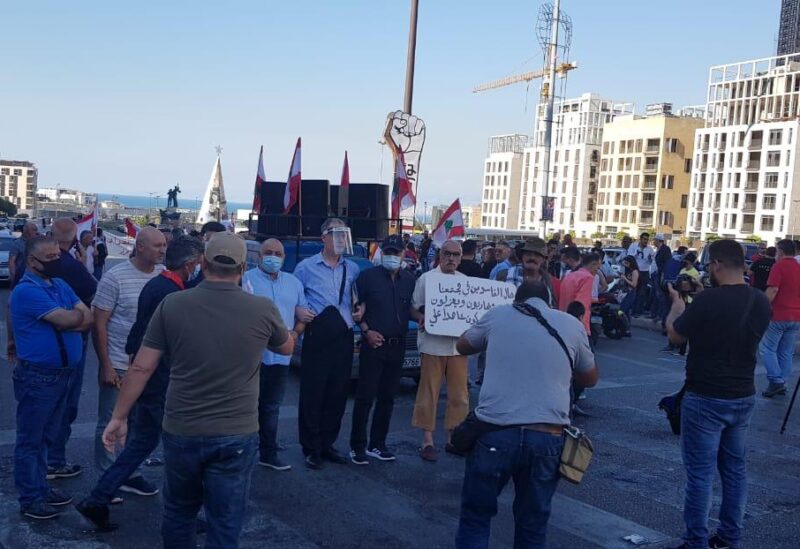 Groups of the civil movement and the “October 17 Front” staged a sit-in facing the United Nations-ESCWA building in downtown Beirut today, where protesters called on the Lebanese people, the families of the martyrs, victims, missing and detainees, and all sectors, unions, students and depositors to “take to the street to withdraw confidence from the corrupt system.”

In a word addressed to UN Secretary-General, Antonio Guterres, the demonstrators requested a meeting to confirm the necessity of implementing international resolutions that guarantee Lebanon’s sovereignty and the rights of the Lebanese people, and to discuss the reconsideration of the charter, constitutionality and legality of the ruling authority in the Lebanese Republic, as well as the possible alternatives and rescue plans.

Protesters highlighted the great risks threatening the fate of the Lebanese people, especially after the crime of the age represented by the Beirut port explosion, and the dangers facing the Lebanese state as a legal and political entity recognized by the international community, the United Nations, and the League of Arab States, due to the de facto forces’ violation of the country’s facilities and borders.

Additionally, they referred in their word to the harshest forms of repression that the citizens’ uprising has been subjected to by the ruling class and the political stalemate and economic deadlock, with no serious efforts to introduce any solution or salvage plan on part of the rulers.

Demonstrators also outlined in their word the many sufferings that the people are enduring, amidst the paralysis of the judicial, legislative and executive authorities in carrying out their tasks for the benefit of the Lebanese people, and the largest theft in history that the Lebanese depositors are facing and the successive governments’ monopolization of power and wealth and abandonment of their duties and responsibilities towards citizens, resulting in the collapse of the state.