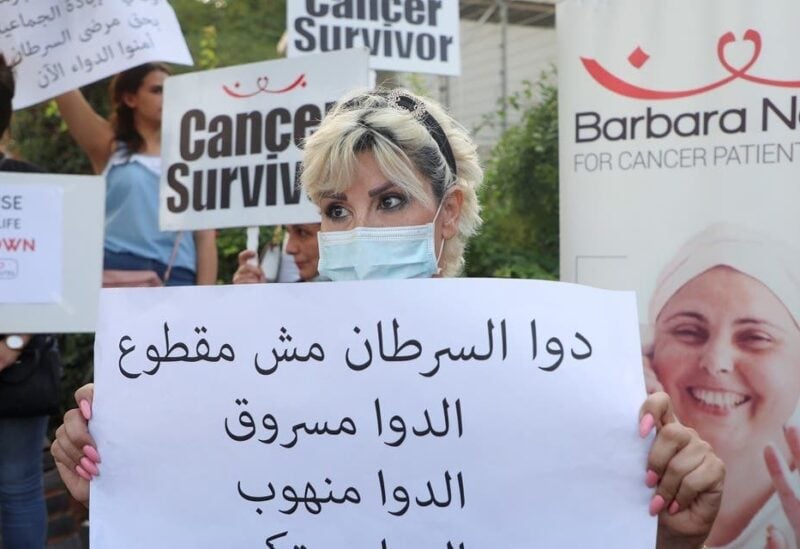 Christine Tohme, a cancer patient, holds a sign during a sit-in demonstration as shortages of cancer medications spread, in front of the UN headquarters in Beirut, Lebanon, on August 26, 2021. (Reuters)

Christine Tohme had already been diagnosed with ovarian cancer when Lebanon’s financial system began to unravel in 2019. She never expected that two years later her country’s economic meltdown would pose a direct threat to her life.

The 50-year-old was later diagnosed with third stage colon cancer in February. Having undergone surgery earlier this year, she was then prescribed six sessions of chemotherapy.

But with shortages of basic goods plaguing every aspect of Lebanese life, Tohme was told there was no guarantee she would complete her treatment as hospitals run out of vital drugs.

So far she has only undergone three sessions. Her cancer has metastasized to her lymph nodes and she fears if she cannot complete her treatment she will only have months to live.

Having knocked on every door to try to secure her medication at any cost, Tohme took to the streets on Thursday, despite her ailing health, to join a sit-in protest with other cancer patients, doctors, and non-governmental organizations.

“I’m hoping that God gives me strength, as I don’t have that much, to stand on my two feet and take part so that maybe people will see us and sympathize with us and send us treatment,” Tohme told Reuters two days before the event.

“I have kids, I want to be happy with them and see them get married and become a grandmother.”

Lebanese healthcare workers have warned for months of declining stocks of vital medical supplies. Many pharmacy shelves are empty as the country’s foreign reserves are depleted on the back of a subsidy scheme used to finance fuel, wheat and medicine that cost the state around $6 billion a year.

This month the central bank declared it could no longer finance fuel imports at subsidized exchange rates because its dollar reserves had been so badly depleted.

Cancer has no patience

Tohme’s case is not unique. Dr. Joseph Makdessi, who heads the haematology and oncology department at the Saint George Hospital University Medical Centre, estimates around 10 percent of cancer patients have been unable to source their treatment in the past couple of months.

“We need an immediate solution,” Makdessi said. “I can’t tell my patients this is a crisis and ask them to wait till it eases because this disease has no patience.”

Lebanon’s deeply indebted state is struggling to raise funds from abroad amidst political paralysis and has gradually eradicated many subsidies.

But cancer medications are still subsidized, meaning in order for agents to import them they have to wait for financing from the central bank, which has all but run down its reserves.

Some chemotherapy treatments, which can cost as much as $5,000 per session, are currently subsidized so the patient pays around $400, with the state bearing the rest of the cost.

“Even if you lift this subsidy to make the medication available, many patients won’t be able to afford it,” he said.

The health ministry did not immediately respond to a request for comment.

The Barbara Nassar Association for Cancer Patient Support, the Lebanese advocacy group that organized Thursday’s sit-in, has provided medication worth more than $1.5 million in 2020 through in-kind donations from former patients.

But now Hani Nassar, whose wife Barbara founded the organization before passing away from the disease years ago, says the country’s fractious politics is hampering efforts to alleviate the problem.

“The central bank wants to remove the subsidy and the health ministry doesn’t and in the meantime the patient is sitting there without treatment,” Nassar said.

At Thursday’s sit-in, patients said they were reaching out to whoever could help them get a second chance at life. “After all I endured, I lost my nails and hair and my body changed, now I reached this point of not finding the treatment and this really set me back,” engineer Bahaa Costantine said.

“I was a person who was full of energy and loves life, I don’t want to be a bride for heaven, this is what I refuse. I hope my voice reaches someone who can help.”