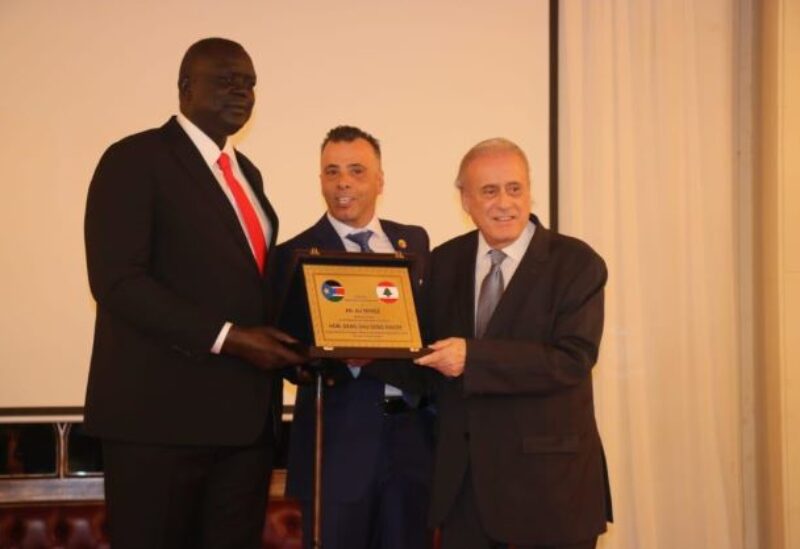 Consul Mayree gave a speech in which he stated that since acquiring the consular representation certificate, he has been working to increase the Republic of South Sudan’s consular and diplomatic presence in Lebanon, as well as cooperation between the two nations.

“The most important thing was to correct the unequal position of Sudanese nationals in Lebanon, the majority of whom immigrated as Sudanese citizens prior to South Sudan’s independence in 2011.” This has thrown their legal and administrative standing in Lebanon, as well as in their home nation of South Sudan, into disarray,” Mayree added.

He also emphasized the need of the Lebanese government taking the lead and deciding on consular representation in Juba.

Although South Sudan and Lebanon are geographically apart, yet they have had long-standing cultural relations dating back to the late 1940s.

When Sudan was still one country under the British rule, the American University of Beirut (AUB), was a highly sought-after institution of higher learning for Sudanese students. The most prominent among them was Ismail Al Azhari, the first Sudanese Prime of the post-colonial Sudan.

And in what is known today as the Republic of South Sudan, formerly known as Southern Sudan, there were many graduates from the American University of Beirut from the 1950s, 1960s, and 1970s. Many of them later became prominent bureaucrats, politicians and academics. The most notable among them were Franco Wel Garang, Martin Marial Takpiny, Lubari Ramba, Farouk Akasha and many others. Even today, we still have prominent public figures that graduated   from the AUB like Dr. John Gai Yoh, who is distinguished diplomat and scholar.

I am glad to mention that the Chairman of our community here Mr. Philip, also graduated from a Lebanese University.

Today, South Sudan still attaches a great importance to that history of cultural cooperation with Lebanon. And although our relations are yet to be elevated to full ambassadorial level, we are glad that our cultural and investments ties are well served by our good friend, Mr. Ali Myree, the Honorary Consul. So, Thank you Mr. Ali and thanks also to your wife, Madam Laila.

Your construction company, Skyline, is already a household name, especially after successfully constructing the Eagle Building in Juba, which is the largest and biggest Defense Ministry structure in East Africa.

The Republic of South Sudan gained independence on July 9th, 2011, as you are all aware. The tenth anniversary of our independence is today. It is a day that we commemorate with great national pride. This is because our independence was won after a long and arduous struggle.

Despite that wonderful sense of accomplishment, we struck ourselves in the foot by launching a mindless war in 2013, just as we were ready to fulfill the promise of our liberty by placing our country on the right development path? Despite the fact that the crisis was quickly resolved in 2015, it seriously harmed our country’s reputation.

This Peace Agreement has happily set the country on a new political trajectory, which is quickly translating into enormous economic and investment opportunities. On top of these opportunities is the expanding investment in our fledgling oil industry.

Some of you might not be aware that South Sudan has the third largest oil reserve in sub-Saharan Africa, after Nigeria and Angola. Much of this reserve has not been tapped. In fact, what has been exploited by the current Joint Operating Companies (JOCs), namely CNPC of China, PETRONAS of Malaysia and ONGC of India, is only a small chunk of the proven reserves.

(a) To highlight the Government’s desire to increase capital investments in hydrocarbons, road infrastructure, power generation and technology.

(b) To showcase new oil blocks that are up for grab, in addition to new opportunities to invest in gas and petrochemicals.

Apart from oil, South Sudan is rich in minerals such as gold, cooper and precious stones. More importantly, it is rich in arable land and water; suffice to mention that much of White Nile River runs through South Sudan.

Our country is also home to spectacular wildlife. The Government has set aside six national parks, representing only 15 % of the entire country’s land mass. I will mention only two parks, namely Badingilo National Park and Boma National Park.

Badingilo Park is located in the Equatoria region near the capital, Juba, and is home to the world’s second largest annual migratory route of antelope, including the reedbuck, tiang and white-eared kob. It is in this park that visitors can catch glimpses of Cheetahs, caracals, East African lions and Nubia giraffes.

In Boma National Park, which encompasses nearly 9000 square miles of grasslands and floodplains, visitors can see antelopes, buffalo, giraffes, cheetah, leopards, and elephants.  Those of you who are interested can actually watch videos of animal migration in South Sudan that are available on YouTube.

The greatest challenge that South Sudan must confront is how to attract investments to build the necessary infrastructure for wildlife tourism.

This is not to bore you with unnecessary details of natural resources of South Sudan. But my point is that a country that is endowed with such enormous resources has and will always have, something to contribute to the global economy.

With a small population of less than 15 million and a vast geographical landmass, South Sudan can be an investment hub of choice to many serious investors. As a government, we are keen to forge mutually beneficial business relations with all countries, including Lebanon.  Therefore, Lebanese and non-Lebanese investors are welcome to invest in South Sudan.

The difficulties we face as a young nation are not unique to us. Such tragic events can be found throughout the history of nations.

Nonetheless, I am optimistic that South Sudan will succeed and take its proper place among the world’s fastest-developing and successful nations.

Finally, I would be remiss if I did not convey my government’s gratitude to the friendly government of the Republic of Lebanon for the excellent treatment of South Sudanese nationals in Lebanon. I’d like to express my gratitude to General Abbas Ibrahim, Director General of Immigration, for his support in allowing our citizens with residency concerns to alter their statuses.

We are profoundly grateful for that assistance.”