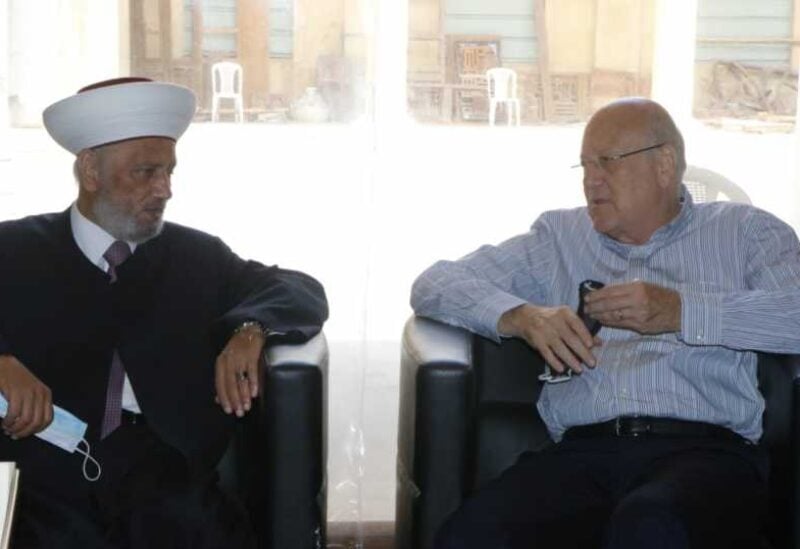 This morning, Prime Minister Najib Mikati met with the Grand Mufti of the Lebanese Republic, Sheikh Abdul Latif Derian, in the Grand Serail, and they had a retreat to discuss current national issues. Firas Abiad, Minister of Public Health, attended part of the conference.

“We appreciate his knowledge and the national perspectives that he perceives, especially at this sensitive juncture, and the inclusive role that Dar Al-Fatwa symbolizes,” Mikati stated as he greeted His Eminence, Mufti Derian.

“The great challenges confronting Lebanon and the Lebanese require first and foremost the unity of the national rank among all Lebanese components, as well as the unity of the Islamic rank, and we are counting on His Eminence’s wisdom and the unification of all efforts for the sake of reunification,” he added.

The Mufti of the Republic, for his part, highly valued the Prime Minister’s efforts in various fields, particularly at this delicate and sensitive stage, as the Prime Minister approaches national and internal issues in a spirit of high responsibility, and in a manner commensurate with the Presidency of the Council of Ministers’ comprehensive national role.

Dar Al-Fatwa, he said, is an incubator for all Lebanese and a symbol of moderation and openness to all Lebanese components.

During the meeting, current concerns were discussed, and the Prime Minister told His Eminence of Lebanon’s attempts to strengthen ties with the Arab, particularly the Gulf Cooperation Council members. Nationalism and Lebanon’s historical relationships with its neighbors

In answer to a question after the meeting, Mikati stated, “We will not advocate for a Sunni boycott during elections in May.”