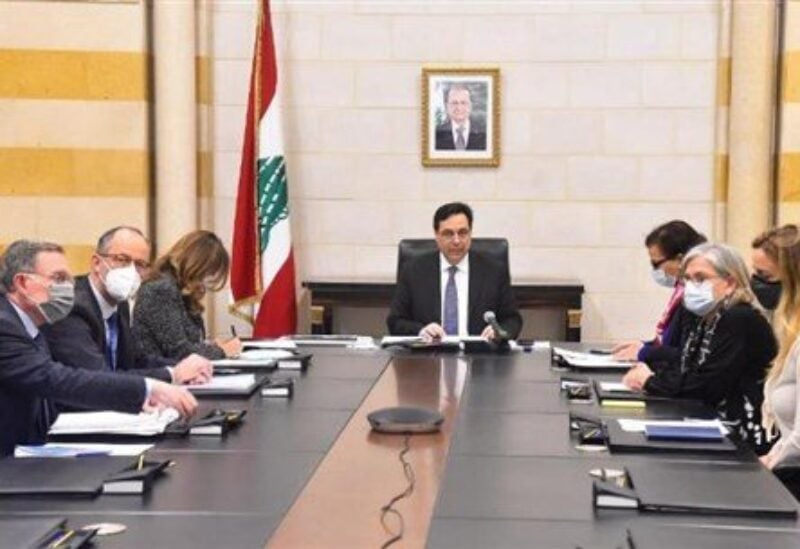 Caretaker Prime Minister, Hassan Diab, chaired on Wednesday at the Grand Serail the first meeting devoted to launching the work of the Consultative Group tasked with providing guidance and monitoring the reform, recovery and reconstruction plan (3RF) set by the World Bank Group, the United Nations and the European Union, in cooperation with the Lebanese government and civil society, in the aftermath of the Beirut port explosion.

The Director General of the Lebanese Presidency, Antoine Choucair, Ambassadors of donor countries including France, the United States, Germany, Britain, Italy, and the Netherlands, as well as European Union’s Ambassador to Lebanon Ralph Tarraf, the Chargée d’Affaires of the Canadian Embassy in Lebanon and World Bank’s representative in Lebanon Saruj Kumar, the President of the Lebanese Industrialists Association Fadi Gemayel, and several representatives of Civil Society organizations attended the meeting via Zoom.

“I am delighted to participate in the first meeting of the 3RF Consultative Group while the world, caught in turmoil and bewilderment, faces critical challenges testing the ability of the International Community to address them.

Covid-19 continues “its merciless march across the world” as underlined by the Secretary General Antonio Guterres on 17 February 2021. Its consequences extend beyond the large scale loss of lives to devastating effects on the nations’ economies and on humanity such as poverty, hunger and sickness. Suffering fuels grievance ease, hopelessness and despair which, in turn, are the driving force of conflicts, instability and refugee flows.

Unfortunately, Lebanon is grappling with all these brewing problems which are grave enough to affect its foundations.

On 4 August 2020, the port of Beirut explosion struck hard and heavy and aggravated the unprecedented, acute and concurrent crisis leaving untold misery on Lebanese and shattering businesses all over Lebanon given that the port of Beirut is the largest shipping and clearing point in Lebanon through which approximately 70% of the Lebanese incoming and outgoing trade is done.

As we launch the work of the 3RF Consultative Group, I take the opportunity to acknowledge with gratitude the rapid and significant mobilization of the International Community, which you eminently represent, to support Lebanon and its people at a crucial time.

The 3RF embodies the firm resolve of the UN, the EU, the World Bank, as well as other friendly member states and stakeholders to meet the needs of the Lebanese people in the aftermath of the explosion.

In sharing with you this lofty purpose and as we meet to assume our joint responsibilities to guide and to further monitor the 3RF implementation, I would like to point out the following:

1- I welcome “the people-centered approach” and the inclusive representation of all stakeholders in the Consultative Group thereby highlighting the importance of broader range of skills “to build a better Lebanon”.

2- As underscored by Mr. Joseph Borrel in releasing “the EU new agenda for the Mediterranean”, “partnership” is indeed the effective response to address “daunting challenges in the general interest”.

3- “In some ways, we are in the darkest part of the tunnel in most countries” as mentioned by the UN senior humanitarian official Mark Lowcock on 7 December 2020 regarding the Covid-19 impact.

In many respects, this assessment applies to Lebanon.  We understand that the path of sustainable development and reconstruction of Lebanon is contingent on reforms which my government initiated. However, in the orderly and sequential 3RF implementation, emphasis should be put on the people’s crucial recovery needs and mostly the vulnerable group to help them cope with multiple shocks they have been exposed to. As 60% of the Lebanese people lie below poverty line, while their country hosts very generously around 2 million refugees and displaced, your diligent care is essential to address a looming perception among the vulnerable of being excluded from international aid and abandoned in the dark days.

In a broad sense, strengthening the resilience of the Lebanese people, the social safety net, the public and private service providers, and supporting the SMEs severely affected by the blast are instrumental to spur livelihood in the early phase of 3RF.

In this regard, the World Bank ESSN project is a valuable step in the right direction.

4- The Lebanese caretaker government will act swiftly and to the extent possible to assist the Consultative Group in fulfilling its duties properly guided by the rules of law and the principles of transparency, inclusion and accountability.

But while remaining actively engaged with the Consultative Group, I fervently hope that a government will be formed very soon to expedite the process of full recovery.

Thank you for your consistent support. It will help turn the tide of events in Lebanon.”

The meeting presented the mechanism of work and project implementation. Premier Diab stressed the need to start with the most urgent priorities. Successive meetings will be held to monitor the progress made in the completion of these projects.