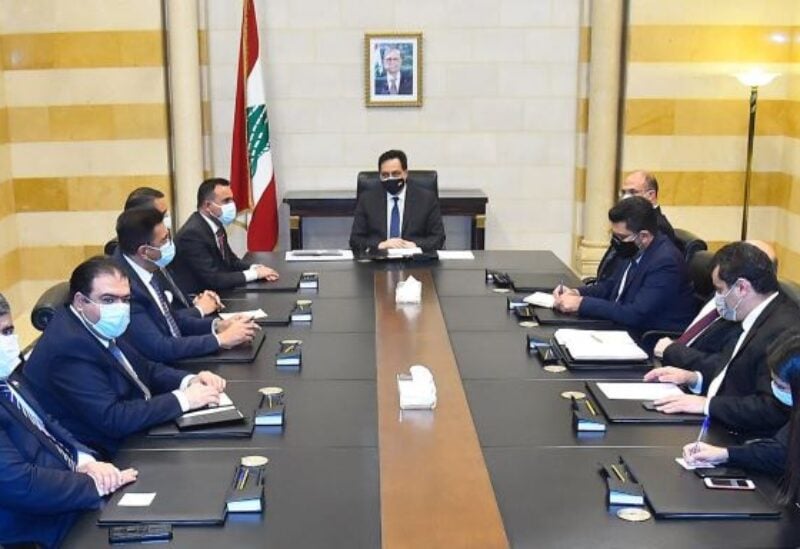 During the meeting, PM Diab stressed the importance of developing cooperation between Lebanon and Iraq, praising Iraq’s standing by Lebanon in its ordeal, as it was among the first countries that rushed to provide assistance to Lebanon in the aftermath of Beirut port blast. Premier Diab wished for cooperation mechanisms to be accelerated in various sectors, in addition to expediting the implementation of the Iraqi decision regarding supplying Lebanon with oil from Iraq. PM Diab also thanked the Iraqi leadership, Prime Minister Mustafa Al-Kadhimi, the government and the people of Iraq for standing by Lebanon.

After the meeting, Minister Al-Tamimi said, “We were honored to meet the Prime Minister of Lebanon with whom we have discussed issues of common interest, conveying him the greetings of Iraqi Prime Minister Mustafa Al-Kadhimi. The Prime Minister praised the support provided by Iraq and the Iraqi government for the Ministry of Health’s efforts, in addition to the provision of medical assistance for the Lebanese people to confront the coronavirus pandemic. We also deliberated on the future of cooperation between the two countries and the visit of Lebanon’s Prime Minister to Iraq to meet Iraqi Prime Minister, heading a large governmental delegation to discuss issues of mutual interest and cooperation between the two brotherly countries. We briefed Premier Diab on the most important procedures and discussions that took place between the Iraqi Ministry of Health and the Lebanese Ministry of Health regarding joint cooperation in various health-related issues, especially in terms of exploring the possibilities of sharing mutual experiences between both countries, such as in the field of medical tourism, joint training for medical, health, nursing and administrative staff, as well as hospital management in the two brotherly countries. We are looking forward for the visit of the Lebanese Health Minister to the Republic of Iraq to finalize the agreements and start implementing them in order to raise the standard of health in both countries”.