Disruption of port’s investigations continues, and new lawsuit against Bitar. 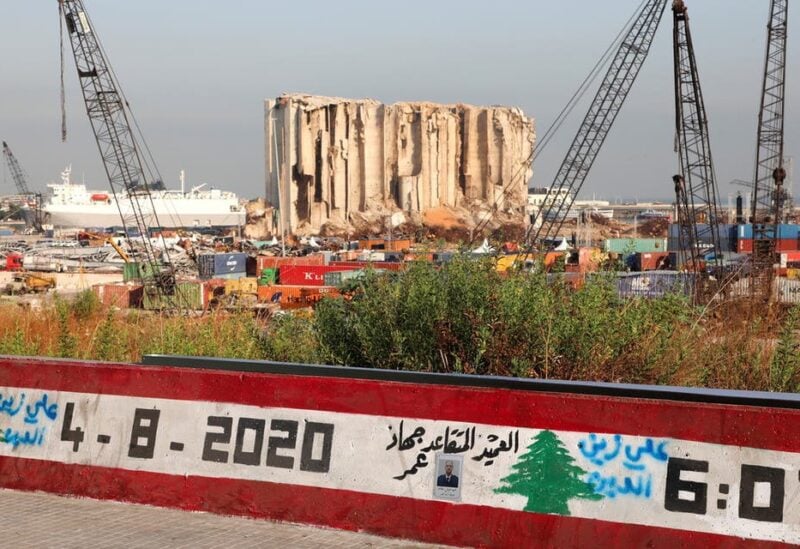 A view shows the grain silo that was damaged during last year's Beirut port blast, as Lebanon marks the one-year anniversary of Beirut port explosion, in Beirut, Lebanon August 4, 2021. (Reuters)

The decisions of the Court of Cassation’s General Authority , in which it rejected the lawsuits against the Lebanese state for “grave mistakes” resulting from the actions of the judicial investigator, Judge Tariq Bitar, were not implemented, which prolongs the suspension of investigations into the largest and most massive crime that Lebanon witnessed. Sources following up on the investigation course, did not find any justification for the delay in sending copies of these decisions to the Court of Appeal, which is overwhelmed by suspension lawsuits submitted against the judicial investigator, thus allowing this court to lift its hand on these cases and pave the way for the resumption of investigation rounds.
In anticipation for any measure of this kind, or any step that surprises the politicians prosecuted in the port case, the defense attorneys of the former Minister Youssef Fenianos filed today a new lawsuit before the General Authority of the Court of Cassation, to sue the state for Bitar’s mistakes, resulting from his response to the formal defenses submitted by him and the issuance of an arrest warrant in absentia against him . These lawsuits, according to a judicial source, will “deepen the crisis of investigations into the port file, and delay the issuance of the indictment that the Lebanese are waiting for.”
Moreover, representatives of the Bar Association and the agents affected by the explosion in the port of Beirut obtained copies of the decisions of the General Assembly, which rejected the two cases submitted by former Prime Minister Hassan Diab and Representative Nohad Al-Machnouk, and a copy of the decision of the General Authority in which the Court of Cassation specified a competent reference for the submition of The judicial investigator suspension lawsuits, and a human rights source confirmed to “Sawt Beirut International,” that the victims’ attorneys “will report these decisions to the first president of the Court of Appeal, Judge Habib Rizkallah.” Explaining that “as soon as the court is informed of the content of the decisions of the General Authority, the courts of appeal are supposed to declare their lack of jurisdiction, and lift their hand from the response cases submitted before them against Judge Bitar,” adding: “This procedure paves the way for the judicial investigator to resume his investigations into the file, and to set new dates for interrogating the political, military and civilian defendants.”