Egypt to deliver gas to Lebanon via Jordan, Syria 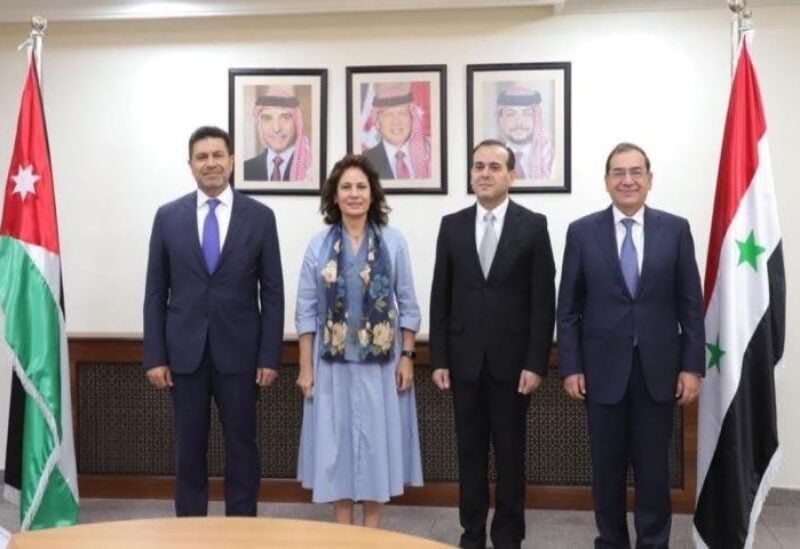 A four-way ministerial meeting of the Arab Gas Pipeline countries (Jordan, Egypt, Syria and Lebanon) resulted in an agreement to deliver Egyptian natural gas to Lebanon via Jordan and Syria, and an action plan and timetable for its implementation.

Zawati told reporters that the meeting mainly aimed to cooperate in the field of re-exporting Egyptian natural gas to the Lebanon using the Arab Gas Pipeline via Jordan and Syria.

Jordan, under the directives of His Majesty King Abdullah II, will exert every possible effort to help the Lebanese people overcome the ongoing energy crisis, she underlined.

She stated that the meeting stems from the belief that cooperation between the Arab Gas Pipeline countries will be an effective and influential step in supporting strategic projects and promoting common interests, which would reflect positively on economic and social development in these countries.

On the sidelines of the ministerial meeting, Zawati said that several technical meetings were held to discuss the infrastructure needed to deliver the gas across each country and the necessary technical requirements, agreeing ultimately to form a team to devise a clear action plan and a timetable for the delivery of gas to Lebanon within a specific timeframe to be submitted for the approval of the parties involved.

El-Molla said that Egypt is working under the directives of President Abdel Fattah El Sisi to leverage all the capacities to offer assistance to the brotherly Lebanese people and join hands with them to overcome the energy crisis and the challenges the country is facing.

Egypt, he underlined, is working swiftly to coordinate the delivery of gas to Lebanon through Jordan and Syria, stemming from its commitment to alleviating the burdens of the Lebanese people and contributing to Lebanon’s support and stability.

For his part, Tohme said that the Arab Gas Pipeline project is one of the most important joint Arab cooperation projects, which was started in 2003.

“Under the directives of Syrian President Bashar al-Assad to help Lebanese people overcome the difficulties they are facing in the field of energy, we will exert every possible effort for the success of the transport of Egyptian gas or Jordanian electricity to Lebanon for the good and interest of our brotherly Arab countries,” said Tohme.

The Syrian minister underlined that the implementation of the action plan “will be monitored through technical meetings within the Syrian territory, so that the infrastructure is entirely ready to receive Egyptian gas and deliver it to Lebanon”.

Lebanon’s Minister of Energy and Water, Raymond Ghajar voiced his gratitude to Jordan, Egypt and Syria for the initiative they took to reanimate the quadripartite gas agreement. He stressed that the initiative could not have taken place without the cooperation of the four countries, and in close coordination with the World Bank during this difficult time that Lebanon is experiencing, to secure a financial cover to sign the agreement.

This cooperation, he added, will lead to the reanimation of another agreement; purchasing electrical energy from Jordan, which may be done at lower prices compared to the prices of power generation in Lebanon.

He voiced hope that the technical team will draw up the plan quickly so that Lebanon can benefit from the Egyptian gas to feed the Deir Ammar plant, which has a capacity of about 450 megawatts, providing more than 4 hours of energy supply for Lebanese citizens.

The ministers underscored that each country will bear the cost of repairing the network within its territory, adding that: “Within three weeks, we will be ready to review the agreements and evaluate the infrastructure.”

Noteworthy, the Arab Gas Pipeline was implemented in three phases, the first phase from Al-Arish to Aqaba, with a length of 265 km and a diameter of 36 inches, with a capacity of 10 billion m3 per year. The supply of natural gas from Egypt to Jordan began during this phase on July 27, 2003.

The second phase began from Aqaba to the Rehab area in northern Jordan with a length of 393 km. The supply of gas to power plants in the north of the Kingdom began in February 2006. It was completed from Rehab to the Jordanian-Syrian border with a 30-km length and 36 inches in diameter in March of 2008.

In July 2008, the southern part of the third phase of the Arab Gas Pipeline was implemented inside Syrian territory, extending from the Jordanian-Syrian border to the city of Homs, with a 320-km length and a 36-inch diameter. In November 2009, the export of Egyptian gas to Lebanon via Jordan was began until it was halted in 2011.

On the export of Jordanian electricity to Lebanon, Minister Zawati said that another meeting will be held soon to set an action plan for preparing agreements and evaluating the infrastructure.