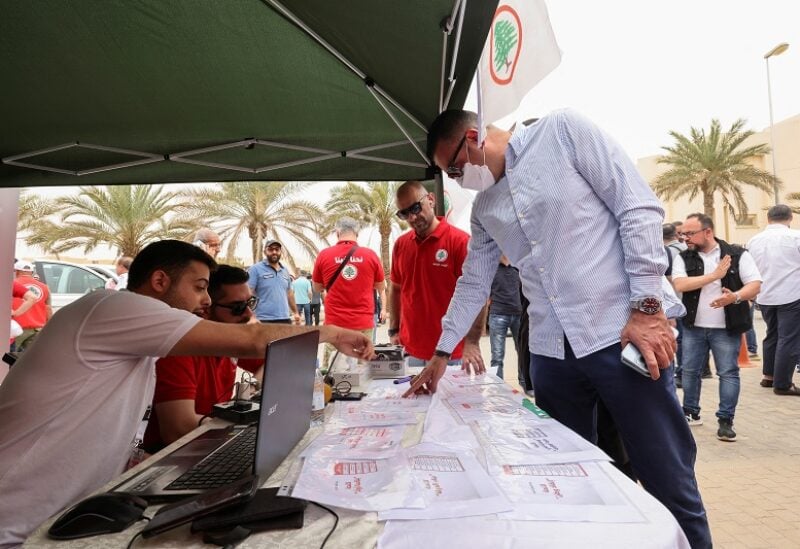 A Lebanese expat checks the name list as he arrives to cast his vote in Lebanon's parliamentary election at the Lebanese embassy in Riyadh, Saudi Arabia May 6, 2022. REUTERS/Ahmed Yosri

Nine days before parliamentary elections are schedualed in homeland Lebanon, thousands of Lebanese living in Arab and Muslim countries began voting Friday.
About 31,000 Lebanese citizens in 10 countries have registered to vote in Friday’s first phase. On Sunday, nearly 195,000 Lebanese citizens are scheduled to vote in other countries around the world including the United States, Canada, Australia, Russia, European Union members states, as well as several African nations.
It is the first time that Lebanon’s diaspora is allowed to take part in the vote, as they were previously prohibited from voting abroad. Lebanese living in Lebanon will cast their ballots on May 15.
The vote this year for the 128-mebmer legislature is the first since the country’s economic meltdown began in October 2019, triggering nationwide protests against Lebanon’s political class blamed for decades of corruption and mismanagement. It is also the first vote since the Aug. 4, 2020 massive blast at Beirut’s port that killed more than 200, injured thousands and caused wide damage in the capital.
Some voting abroad on Friday and Sunday are from the thousands who left Lebanon since those catastrophic events.
Many political opposition activists are running in the election, hoping to challenge mainstream parties and political figures who have held on to their seats for decades. But the opposition is fractured and many fear the vote holds little hope for change.
The 30,929 registered voters in countries including Saudi Arabia, Iran, Oman and Egypt are the first to take part in this year’s elections by casting their ballots on Friday at 13 polling stations, mostly organized at Lebanese diplomatic missions.
Parliamentary elections are held once every four years and the last vote in 2018 gave majority seats to the powerful Shiite Hezbollah group and its allies.
Lebanon’s parliament is equally divided between Christians and Muslims. The new legislature will elect a new president after President Michel Aoun’s term ends in October.
According to Lebanon’s power-sharing system, the President is a Maronite Catholic, the prime minister is a Sunni, and the parliament speaker is a Shiite. Cabinet seats are also equally divided between Muslims and Christians.
More than 70 percent of the country’s 6 million inhabitants, including 1 million Syrian refugees, now live in poverty as a result of the crisis, which was described by the World Bank as one the world’s worst since the 1850s.