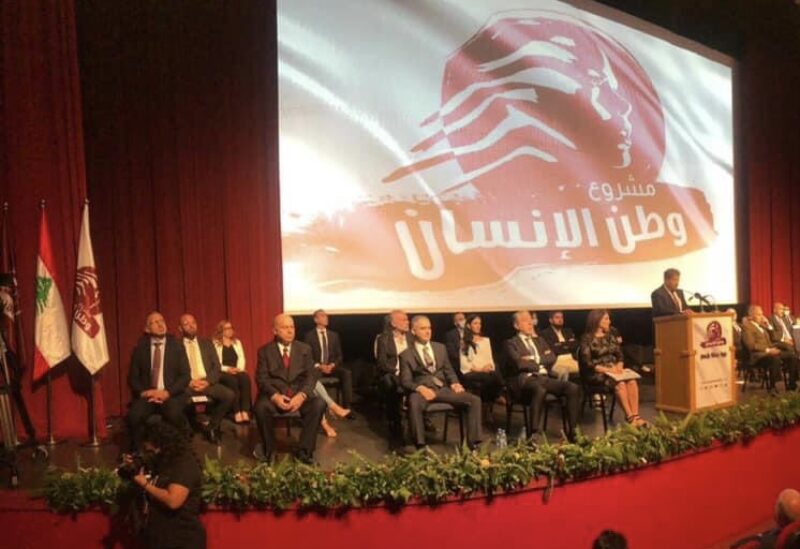 Resigned MP Neemat Frem, launched today the “Project Watan” in a press conference held at the Louaize Notre Dame University in the presence of the founders of the project with its executive, research and administrative bodies.

The project is a “national political movement that aims to build the republic of man, freedom, mission, message and sovereignty in Lebanon”, Frem said in his launching word.

He considered that “Lebanon and man are twins, and there would be no reason for Lebanon’s existence if it were not a notion, message and belief for human joy and liberty.”

“It was not a coincidence that Lebanon existed in this part of the East, where it has a special history. It opened up through its Orientalism to the West since the seventeenth century, and so it lived through the Renaissance. It also interacted with the East during the Arab Renaissance and was at its basis, with its message being that of science, freedom and excellence. This is how Lebanon has always been a land for the oppressed, and always a land and a refuge for man,” Frem went on.

Unfortunately, he pointed to the current humiliation and starvation witnessed in Lebanon, “being on a hellish journey towards the dark ages.” He added: “What is simply happening is that the country is leaving the twenty-first century in terms of life, education, hospitalization, and culture, destroying its beauty, polluting the air, especially its unique wealth in its groundwater, and certainly at the level of its infrastructure and technology. The Lebanon we know is disappearing with no return, and this time is different from all the previous times. They are not only destroying Lebanon, but rather the Lebanese man, the root foundation of Lebanon.”

“From here, we decided to confront this reality, not with anger or coercion, but with professionalism, planning, boldness, and great faith. Knock and it will be opened to you, this is our faith. We want to create an awakening, and we do not want it to be an awakening of death, but rather an uprising of life,” Frem asserted.

He added: “For these reasons, our response to the great collision and the death of Lebanon’s identity was a project that denotes an alternative to surrendering to death, the project of the homeland of man.”

He explained that the launched project is a platform that is committed to building a state of productive and pioneering institutions and a state of superior services. “The essence of the project is the ‘human being first’ in his dignity, happiness and prosperity. Its goal is an incubating environment for renewal in the national pact, which guarantees the rights of the citizen and the obligations of citizenship, and stimulates productivity, modernity and equal opportunities,” Frem emphasized.

“We are in need of a homeland, for a person without a homeland is an incomplete being. We all become strangers in the world, if we lose our homeland, and if the homeland no longer resembles us, and we do not resemble it…The relationship of the homeland with the citizen is a national contract similar to a marriage contract. It is true that its basis is true love and mutual joy, but at the same time, treatment and respect, rights and duties are very important. Hence, building the institution of the Lebanese state to provide the highest level of pioneering services constitutes the basis for the relationship between the nation and the citizen,” Frem maintained.

Alongside the human homeland project, a portal was also launched at the following link: WWW.PROJECTWATAN.COM.

“This portal will facilitate workshops and participatory panel discussions for the ‘Project Watan’ research teams. It will form a digital community for residents and expats. Through it, we are working together to build our new Lebanon, and build the largest Lebanese network that qualifies us for the electoral deadline with success and distinction,” he explained.

“We call upon every loyal, concerned person from all spectrums of Lebanon, every revolutionist, and all our distinguished guests present with us from the forums and formations of the revolution, to communicate and interact with the project, to be together in saving the identity of Lebanon, and to secure a decent entry for our generations into the twenty-first century and beyond, on the basis of competence, professionalism and integrity,” Frem concluded.