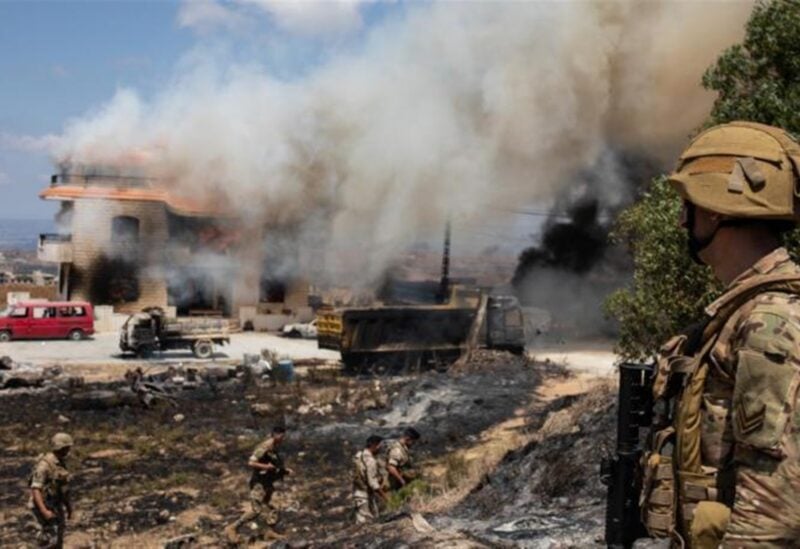 Hiding from the heat of the glaring summer sun, Ismael El Hassan sits outside the morgue waiting to identify his son’s remains. Lebanon’s crisis has become a personal tragedy for him.

The heavy iron gate is hauled open and Mr El Hassan, 62, stumbles in. A few moments of silence pass, then the wailing begins.

Mr El Hassan is in no doubt – the charred corpse in the morgue at Tripoli Government Hospital is that of his son Mohammed, 29.

He collapses in tears, his pained cries soon dipping to a whimper. It is the second time today he has gone through this heartbreaking process. Hours earlier it was the body of his older son Ahmed, 31, that he had to identify.

“One I can handle, two is too much,” he cries. Though he is certain the body is his son’s, army personnel ask him to take a DNA test to be sure.

The two brothers were among dozens of people caught in a blast in the village of Tleil, in Lebanon’s northernmost province of Akkar, as the Lebanese Army redistributed a haul of fuel seized in the early hours on Sunday morning.

Officials said 28 people are confirmed dead – at least two of them soldiers. Seven bodies were burnt so badly that they are unidentifiable, awaiting DNA testing. For now, they lie nameless at hospitals in north Lebanon.

Four soldiers are among those missing after the blast.

Neither Mohammed nor Ahmed had a car. They had no need to queue for fuel and stopped only to investigate the commotion on Saturday night, before being killed when the tanker exploded.

The family, originally from Homs in Syria, came to Lebanon in 2011 when Syria’s civil war was in its early stages. A decade on, it is Lebanon’s crisis that has robbed the family of two of their sons, both of whom leave behind pregnant wives.

The country was plunged into a painful fuel crisis earlier this week when central bank governor Riad Salameh announced the bank would no longer subsidize fuel imports.

With many unable to afford black market rates and many petrol stations across the country closed, the army went after hoarders.

They forced those found stockpiling fuel to sell it, or even distribute it for free.

That is what soldiers they were doing in Akkar late on Saturday, until an individual – believed to be the son of the fuel’s owner – angrily tried to put a stop to it.

He confronted the crowds as they pleaded for fuel, shots were fired, and the tanker exploded.

Footage of the ensuing fire showed blackened bodies still alight around the wrecked tanker. The incident has made Lebanon shudder.

An emergency meeting of the Higher Defense Council was chaired by President Michel Aoun on Sunday, while former prime minister Saad Hariri called on President Aoun to leave office, telling him to “preserve what is left of your dignity for hereafter”.

Friends of the El Hassan family are in no doubt their deaths are a direct result of the political and economic crisis suffocating Lebanon.

“The government is responsible. The guy was hoarding thousands of liters of fuel. Nobody was telling him not to. But as a Syrian, if I keep one litre of fuel in my house, the intelligence will come to my door,” says Abu Ahmad, who has lived in the same building as the El Hassans for years.

In Tleil, the anger over the blast was visceral. Barely a week had passed since the first anniversary of the Beirut port blast this killed more than 200 hundred people, injured thousands and devastated the capital. Now this poor corner of the country is experiencing its own tragedy.

On Saturday, as Mr El Hassan prepared to travel to the hospital, a furious crowd gathered outside the home of the man believed to be the fuel hoarder. At first, they pelted the window with volleys of stones and called for his blood.

Then, as the Lebanese Army looked on – seemingly unwilling to step in and protect the hoarder’s property – the crowd stormed the house and set fire to it.

Protests escalated in Beirut too, with demonstrators storming the house of Akkar MP Tarek Merhebi.

Funerals for the latest 28 victims are due in the coming days. In anticipation of further unrest, the Lebanese Army has sent hundreds of soldiers to Akkar.