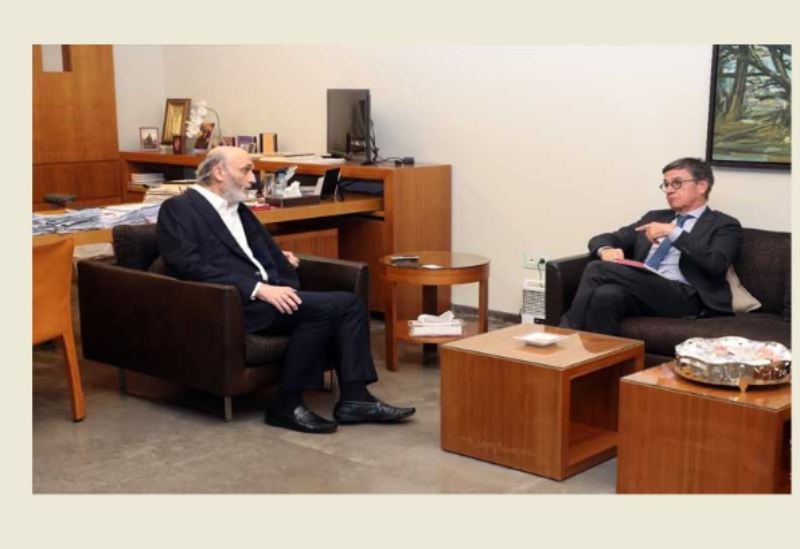 Samir Geagea, the leader of the “Lebanese Forces” party, visited Koen Vervaeke, the Belgian ambassador to Lebanon, on Friday in Maarab. Heikki Vandermander served as Vervaeke’s first secretary, and the two spoke about the most recent political developments.

Geagea emphasized at the meeting that the Taif Agreement was upheld by the Lebanese Forces.

“A regime change is not on the table today except in the minds of those who have their own agenda. Our priority at the moment is to change the current ruling authority, which is responsible for the country’s political and economic bankruptcy and for sabotaging Lebanon’s Arab and international relations,” Geagea said as referring “the Hezbollah-Free Patriotic Movement duo and their allies.”

The LF leader stressed that his political party’s current task was to continue to fight through the election of the opposition’s majority candidate, MP Michel Moawad, “in whom we see the qualifications required for the great presidential task.”

“We are working tirelessly to garner the largest number of MPs in support of his name,” he added.

“On the other hand, Hezbollah and its allies decided to continue disrupting the presidential election sessions, as in yesterday’s case, because they have not yet reached an agreement on a candidate from their ranks,” Geagea noted.

Moreover, he expressed belief that “the maritime demarcation agreement with Israel carries more economic dimensions than it is political or strategic ones, especially in light of the hostile relations between the two countries.”

As for the issue of Syrian refugees, Geagea stressed that Lebanon could no longer bear this burden, neither at the demographic nor at the infrastructure levels.

“The Syrian regime must be pressured to take them back as soon as possible, otherwise, they should be distributed among Arab countries that have the capabilities to accommodate them demographically,” Geagea added.