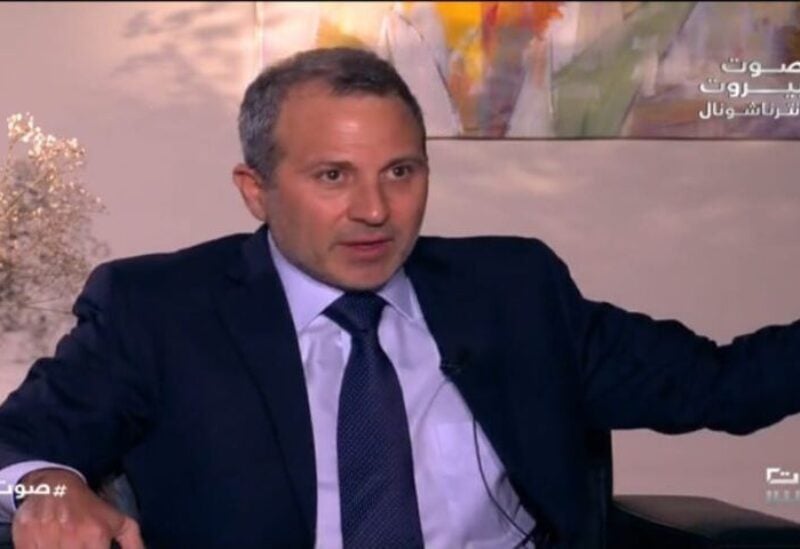 The Head of the Free Patriotic Movement, MP Gebran Bassil, hoped that a government would be formed wishing that the officials have learned from the past 9 months.

“I informed Prime Minister-designate Najib Mikati when I visited him last Saturday, that I will not name him and will not go into the details of the formation.”

Bassil said in an interview with Mario Abboud during “Voice of the People” program on Sawt Beirut International (SBI) and “LBCI”: “FPM will not interfere in the entire process of government formation. We want the government to be formed rapidly, according to the charter and constitution, but this shall be decided by the President of the Republic, the PM-designate, and the blocs that will participate. We will either give the government our confidence or we will not based on the cabinet line-up and its program.”

He added: “We are all required to lead Mikati’s battle in forming a government.”

Bassil said that when participating in a government, which does not include ministers who are committed to us in politics, then we are not participants. Diab’s government is the best proof, as we were the only party that named ministers who doesn’t belong to us politically, three of which I didn’t even know.

Bassil pointed out that so far, money is still being smuggled amid an absence of capital control, and forensic audit is required from the International Monetary Fund (IMF). “The whole system is against us,” he said.

He stressed that “the political and financial system does not want forensic audit. They threaten us that they will start from the Ministry of Energy and Water, and I encourage them to start from this point.

Bassil said that he disagrees with President Michel Aoun on some points, mainly on refusing to provide the largest bloc in the Parliament the blocking third, if its size allows obtaining it? “When the president agreed on not giving the blocking third to any party, we decided not to participate in the government.”

Bassil advised Mikati for not being Hariri’s fifth victim, and said: “Hariri have overthrown Safadi, al-Khatib, Tabbara, Mustafa Adib, and himself.”

Bassil said that he will not give confidence to the government if all portfolios are rotated, except for the Ministry of Finance,” calling for “not to set new norms or new obstacles.”

He pointed out that at the beginning Hariri gave the Christians the Ministries of Interior and Justice, then he retracted, or was asked to retract. Bassil considered that there is a certain limit for the usage of the “charter” paper.

Bassil considered that “PM-designate Mikati is successful on the personal level, capable, and he should salvage the Sunni sect and all sects.  “I don’t see any reason that prevents him from forming a government or any hurdles that obstruct the formation even before the August 4.”

Bassil pointed out that “President Aoun was demanding the Ministry of Interior in all previous governments, and the matter had nothing to do with elections.”

He said: “I perceive that this mission is easy. But if Mikati followed Hariri’s same path, on the basis of failing President Aoun and not forming a government during his covenant, we will not sit back and watch; we have many options in this context.”

Bassil said that resigning from the Parliament affects the party and the country negatively, so let them forget about it. They destroyed the country due to the issue of forensic audit. He added: “Didn’t they ruin the country because they refuse forensic audit? Don’t you know their intentions towards the election law? Didn’t they extend their mandate previously?”

He said: “The second republic has finished. So let us cross to the third republic by using the constitution and the law, without burying the Taif Accord.”

Bassid added, “I was never with the political Maronite, and I am against political Sunnism and against reaching a political Shiite. Today there is a feeling of a certain strength in a sect, but there isn’t political Shiite in the country.”

Bassil called for implementing Taif and agreeing on setting deadlines in the constitution. “He who has conscience does not keep watching the country’s collapse, while he is unable to save it, but he who doesn’t have conscience will do it.”

“If Parliamentary elections take place and Hariri returns to the head of the Sunni community, of course, I will deal with him, although he always refused to deal with us,” said Bassil.

In response to a question about the message that Michel Aoun addressed to the Parliament before designating Hariri, he said: “The President’s message to the Parliament was to warn them, because he was sure that Hariri will not be able to form a government, and we have seen what happened to the country in the last nine months.

Bassil considered that some parties want to eliminate the idea of the “Strong President” in Lebanon.

Bassil confirmed that he is not a candidate for the Presidency of the Republic, and that he promised himself not to talk about Presidency, as long as Michel Aoun is the President.

In this context, he said: “We suggested to Geagea that the strongest among Christians should always be the president of the republic, but he refused.”

Bassil said: “I am ready today to reach a national and Christian understanding on several issues that will avoid Christian-Christian divisions and national divisions. One of the first points of understanding is electing the strongest among Christians as President of the Republic.” He added that he is ready for a dialogue in Bkerke as this agreement may protect the Christian’s unity.”

He said: “Is there anyone who does not know that the President of the Republic and the movement wanted to change Central Bank’s Governor? But the constitution governs us, and we didn’t have a two-thirds majority in the Council of Ministers. The Prime Minister’s stance along with Minister of Finance and external factors were known.”

Bassil considered that it is of their duty to deal with any maltreatment that comes from Lebanon towards the Gulf states, such as controlling the borders, incitement and political insults, as Lebanon should not be a platform for attacks on the Gulf states.”

He said: “Saudis’ anger from us is because we stood by Prime Minister Hariri over what happened to him in Saudi Arabia.” Bassil said that relations with the whole Gulf countries should be restored.”

Bassil said that the cost of the Syrian crisis on Lebanon exceeded $50 billion, and they prevent us from participating in the reconstruction. “When I talked about going to Syria and returning the displaced, they made for us October 17.”

He considered that “the money of the eastern countries is sufficient for reconstructing Syria, and that the Western countries should reduce the funds allocated for Syrians in Lebanon, but rather they should pay for their return.”

Bassil said that the oil and gas is an essential part of the war in Syria and what is happening in Lebanon. We are in a geopolitical region, that’s why oil pipelines are very critical. “Definitely we have gas,” he added.

Bassil considered that “the Central Bank’s platform “Sayrafa” should have reflected the real market price, but it didn’t? Dollar manipulation is a political pressure card. He accused the Central Bank Governor of manipulating with the credits opened for basic commodities, as there is neither transparency nor clarity in this context.”

He pointed out that “the arguments on Electricite Du Liban (EDL) loan led to a 30 percent increase in the cost from the mandatory reserves, that means additional $300 million. As for citizens, they are now obliged to pay 500,000 LBP for 5 amperes because some parties such as the Lebanese Forces decided to argue.”

In response to a question about whether Hezbollah will be its ally in the upcoming elections, he said: “There isn’t any consistent ally for the Free Patriotic Movement in the elections.”

In response to a question about whether he was subjected to an assassination attempt, he said: “I will not answer this question… But I apologize to people because I limited my movement, because there is a security situation.”