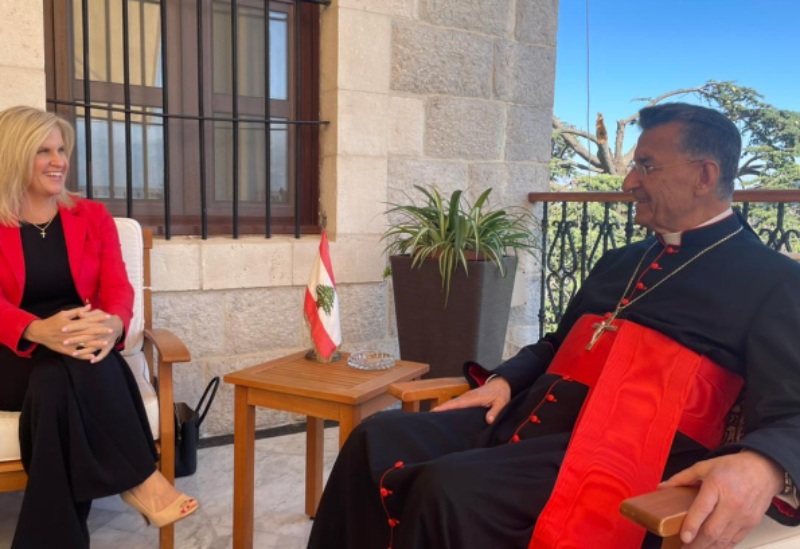 Mar Bechara Boutros Al-Rahi, the patriarch of the Maronites, welcomed Tonia Khouri, the former regional director of the IDC “In Defense of Christians” Organization, on Thursday at his vacation villa in Diman.

The two talked about the political situation in Lebanon during their discussion, particularly how urgently Lebanon needs assistance from the US and the rest of the world to get through its current political and economic crisis.

Both sides also saw eye-to-eye on the need to elect a strong president with a clean past “who is capable of taking the necessary decisions to salvage Lebanon out of the prevailing crises without bogging the nation down in vacuum, especially at the absence of an effective government at the moment.”

In the wake of the meeting, Khouri thanked Patriarch Al-Rahi for the meeting, which she described as “valuable”.

“I expressed my gratitude and full support to him regarding Lebanon’s neutrality,” she said.

“We’ve stressed the necessity of electing a Maronite Lebanese president with a clean past, who has Lebanon’s interest above all else, and who works to preserve Lebanon’s identity; we cannot afford a presidential vacuum that disrupts the country and wastes the lives of Lebanese citizens who have suffered a lot within the past years,” Khouri said. The former IDC president also stressed that Lebanon needed an effective and efficient government to help it out of the current crisis.

“Lebanon is the only country in the Middle East that has real religious pluralism, and this is what makes it unique. But without Christians in Lebanon, there will be no religious pluralism. That is why we want all groups to remain in Lebanon in order to preserve its original identity,” Khouri explained.

She went on to highlight the need to give the Lebanese an incentive to stay in their land. “I am ready to help by all possible means from the United States,” Khouri pledged.

In response to a question, Khouri pointed out that she was currently on a tour in Lebanon to inspect its needs and find ways to secure aid for it.

“Lebanon, at the present time, needs help more than ever. I have started working for Lebanon since 2011 and have been applying pressure to support it in international forums, especially when I was a member of the US Congress,” maintained Khouri.

“I give my heart to Lebanon, and I will continue to do so,” she added.

In response to another question, she said, “My tour began by visiting universities, such as NDU and USEK, and by meeting members of 3 Nails, an organization we have set up to provide basic needs — not only food and necessities, but medical supplies and procedures as well. Tomorrow, I will also visit Norge, which has restored and helped rebuild many buildings in Beirut after August 4 blast,” Khouri said.

“I will carry all the information I gather about Lebanon during my trip with me to the United States and convey live testimonies about the bitter reality experienced by the Lebanese. I promise you that I will continue my work to convey the voice of the Lebanese people to decision-making countries,” the former IDC president concluded.