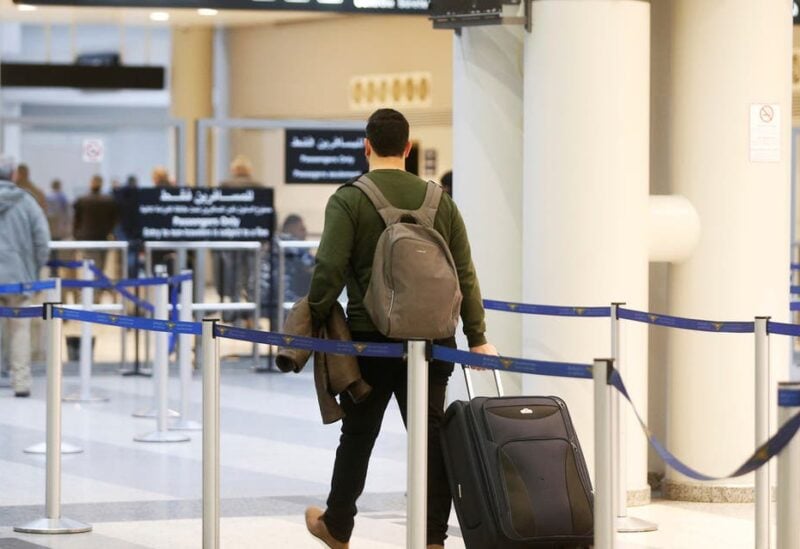 Habib Rahhal, 28, carries his luggage as he heads to board a plane to Germany, at Beirut international airport, Lebanon February 12, 2020. (File photo: Reuters)

A report published by the Crisis Observatory at Lebanon’s American University of Beirut has concluded that the crisis-hit nation is entering a third mass exodus wave of emigration.

“For months, Lebanon has witnessed a noticeable rise in the rates of emigration and those seeking it, which makes us enter the beginning of a mass exodus wave,” according to the report.

In the midst of the raging crises in Lebanon and their daily repercussions on all aspects of life, the Lebanese crisis is reportedly establishing long-term consequences through the expected massive emigration, whose implications have begun to appear.

According to the report there are three internal worrying indicators regarding Lebanon’s entry into a mass emigration wave, which is expected to go on for years.

The first indicator is the high chances of emigration among Lebanese youth, as 77 percent of them indicated that they think about emigrating and seek it, and this percentage is the highest among all Arab countries, according to the “Arab Youth Opinion Survey” report issued last year.

The pursuit of emigration by most of the Lebanese youth is a natural result of the decline in decent job opportunities, as the World Bank estimates that one out of every five people has lost his or her job since the fall of 2019, and that 61 percent of companies in Lebanon have reduced their permanent employees by an average of 43 percent.

The second indicator is the massive migration of specialists and professionals, especially male and female workers in the health sector as doctors and nurses, and in the educational sector, including university professors and teachers, in search of better working conditions and income.

The report added that the Nurses Syndicate estimated that 1,600 male and female nurses have emigrated since 2019. As well as members of the educational body, hundreds of whom immigrated to the Gulf states and North America.

At the American University of Beirut alone, 190 professors who emigrated were registered during the year of the departure, making up about 15 percent of the educational body.

The third indicator is the anticipation that the crisis in Lebanon is a going to be a prolonged crisis.

The World Bank estimates that Lebanon needs at best 12 years to return to the levels of GDP that were in 2017, and in the worst case to 19 years.

The World Bank report had mentioned that with the absence of a political decision with a serious approach to the Lebanese crisis, which suggests a deliberate collapse, it is possible that state institutions will fade away more and more and fall into a deadly spiral that extends for two decades. This will constitute a pressure factor for hundreds of thousands to leave their homeland in pursuit of investment, work, study and retirement.

A fourth external indicator is the increasing need for labor, professionals, and young groups in a large number of the most advanced countries in the world, which are witnessing a decline in population growth rates and an increase in the proportion of the elderly.

When all those indicators are taken into consideration it can be concluded that the nation will witness a large wave of emmigration in the coming years.

The effects of the expected third wave of emigration will be dire through a loss that is difficult to compensate for the Lebanese human capital, which is the mainstay in rebuilding the state, society, and the economy.

The report added that the successes of the Lebanese in the countries of diaspora have always been a material in building the narrative of “the good Lebanese,” but it covers the dark side of famine, wars, and destruction in their mother country.

The report by the Observatory said that this “mass exodus” is the third after the first large wave in the late nineteenth century, extending to the period of the First World War (1865-1916), when it is estimated that 330,000 people emigrated from Mount Lebanon at the time.

The second big wave during the Lebanese Civil War between 1975 and 1990, where researcher Paul Tabr estimated the number of emigrants in that period at about 990,000 people.

Mass migrations occur from countries falling into deep economic crises, where crises constitute pressure factors on the population to leave in search of safety, security, and livelihoods.

Venezuela is currently among the global displacement crises by the United Nations High Commissioner for Refugees, where the number of forced migrants due to the Venezuelan crisis is estimated at four million people who have been displaced to neighboring countries as a result of the economic and living deterioration in their country.

The same applies to Zimbabwe, where the number of emigrants to South Africa, due to the severe economic and living crisis since the 1990s, is estimated at three million. Greece witnessed a large emigration because of its deep economic crisis, which reached 397,000 people in a few years between 2010 and 2013.

The Crisis Observatory at the American University of Beirut is a research initiative under the supervision of Dr. Nasser Yassin which aims to study the repercussions of the various crises in Lebanon and ways to approach them.