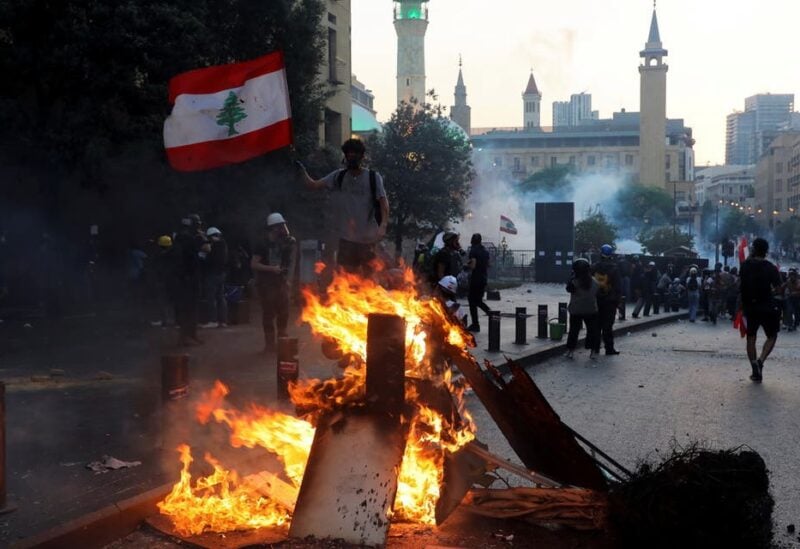 Demonstrators walk near a burning fire during a protest near parliament, as Lebanon marks the one-year anniversary of the explosion in Beirut, Lebanon August 4, 2021. (Reuters)

In its handling of the Lebanese dilemma, the international community resembles a judge to whom a woman resorts to seek refuge from an abusive husband who rendered her children homeless, wrecked her home, disgraced her, and threatened to kill her.

Taking pity on her soul, the Judge gives her some money to buy dinner and sends her back to her “persecutor” with a message denouncing his actions, urging him to improve his behavior, and explaining at length the importance of the role of a husband and father in the household.

In this metaphor, Lebanon’s political leaders are the husband, who, upon reading the letter, beats up his wife and robs her of the “donation,” which he is then quick to lose at the gambling table, before returning enraged to his mortgaged home, where he abuses his children, upset by their hungry and agonized groans.

In vain, this woman tries to free herself from her husband. Her family refuses divorce because it is forbidden by religion. Clergymen forbid her from rebelling because it contradicts divine teachings. Her sisters refuse to take her in because they live in crammed apartments and on limited resources. The judge refuses to give her the divorce because he fears for himself from this violent husband who leans on some strongmen whose greed he helps satisfy.

A close examination of the speeches delivered at the “Conference in Support of the Lebanese People,” organized yesterday by the French Presidency and the UN General Secretariat, can easily draw parallels between Lebanon and that wife, as well as between most speakers and that judge.

This was evident in reactions on social media to French President Emmanuel Macron’s tweet about Lebanon on the first anniversary of the Beirut Port blast. To many of his followers, Macron seemed like Martha, to whom Jesus said when she was busy preparing his lunch: “Martha, Martha, you are worried and bothered about so many things; but only one thing matters.”

Below are some of the comments people left for Macron:

– “You donate COVID-19 vaccines to the Lebanese and yet you leave them captive to Hezbollah’s deadly weapons.”

– “You send money to the Lebanese people then call upon their plunderers to form a salvation government.”

– “You call for uncovering the truth about the Beirut Port explosion, but you leave the investigation in the hands of those involved in this crime.”

Such comments should not come as a shock to Macron, for he knows they are true. He realizes that French stakeholders who are focused on Lebanon are familiar with Hezbollah’s role and its political and economic repercussions and delve deep into every detail of the blast. In fact, major French media outlets have been monitoring the shameful, disgraceful series of events impeding the investigation into the Beirut Port explosion. Events that go beyond issues of political immunities and administrative protections to something even more dangerous: witness intimidation.

The intimidation of witnesses aims to prevent the investigation from uncovering the identity of the party behind the import, haphazard storage, and partial theft of ammonium nitrate at a convenient timing for Hezbollah and Bashar al-Assad’s military alliance; the party responsible for the lack of surveillance cameras from the hangar in which the chemical was stored—unlike all other hangars—and the deliberate disregard for the repeated warnings.

Investigations have shown that many Beirut Port officials and staff knew some important information, but refrain from coming forward or revealing names, fearing for their lives. Some of the functionaries arrested in connection with the case have “whispered” that they possess groundbreaking evidence but would rather spend years in jail than utter a single word and dig their own grave.

These fears are validated by suspicions — which Lebanese authorities have yet to dispel — that four crimes were committed to prevent the truth from coming to light, targeting, in seriatim, Colonel Joseph Skaff (ret.), Colonel Mounir Abu Rjaili (ret.), the photographer Joseph Bejjani, and the intellectual Luqman Slim, “who was the first to link the ammonium nitrate to Bashar al-Assad’s explosive barrels,” according to Human Rights Watch.

This means that between the catastrophic explosion and the stark reality is a very deep chasm that can only be bridged the day the person involved in the crime is no longer the decision-maker in the country.

In a nutshell, all that happened and is still happening in Lebanon and producing tragedies continually recounted with great astonishment by Lebanese and international media is merely the result of allowing the most serious crimes to go unpunished, so long as both the balance of power and sectarian and legal immunities guarantee impunity.

The Lebanese people also know this truth. A truth that thrills the followers of political leaders, but enrages the free amongst them, who vie to rid all their compatriots of a heavy burden.

On them, we shall count.

This article was originally published in, and translated from, Lebanese news outlet Annahar al-Arabi.