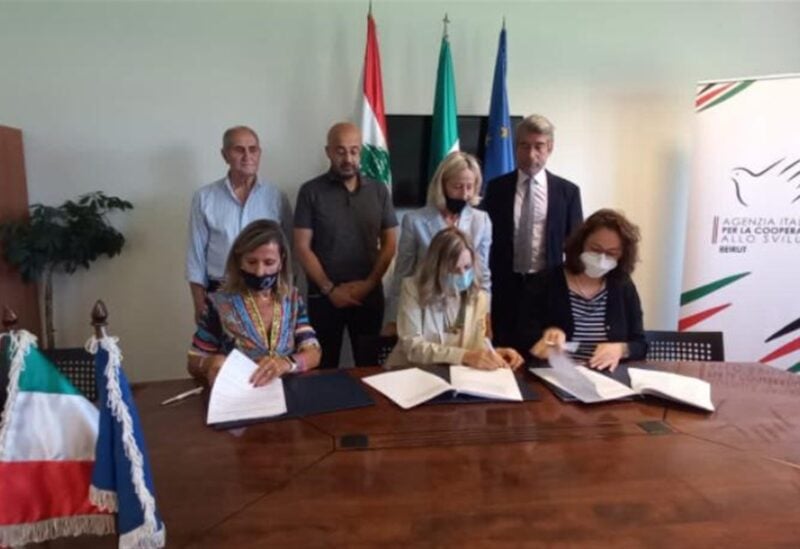 The Italian government provided a grant contribution of 4 million euros to the UNDP to implement the project and ensure the operation and maintenance of the aforementioned plant, considering the financial and economic crisis that is currently affecting Lebanon.

This new contribution will sustain the running of the project for other two years, with the aims of preserving the environment and increasing the health and hygienic conditions of the population within the area.

The signing ceremony kicked off with an address by the Italian Ambassador to Lebanon, in which she said: “We are proud of this Italian investment. We are aware of its impact for the protection of health and environment. Health and environment are top priorities for the Italian Development policy. And we are equally aware, in this difficult time for Lebanon, Of the necessity to preserve the functioning of this facility. For a successful implementation of the project, we need to make sure that everybody delivers on its own commitment (steering committee).

This project is a test case for a partnership in action. A partnership between donors, UN agency and several state institutions, to prove our capacity to face a critical challenge in a critical sector, working together to protect a basic public service in the short term and at the same time to reform the whole water sector.”

For her part, UNDP’s Hauenstein said, “As I said in the beginning for us UNDP, accepting to manage and oversight the facility for the coming two years is a new way of providing development services. We are convinced that this is an opportunity to pilot a good example for others to follow in the future. Once the project is running, it can be integrated into other upcoming projects as the quality of the treated wastewater is such that can be used for irrigation, which is critical to unleash the great potential of this region for agriculture. At the same time it is a powerful example on how Lebanon can adapt to climate change.”

In turn, Lebanon’s Caretaker Minister of Environment thanked the Italian government and the UNDP for funding  and managing Zahle’s waste water plant.

“The government is endeavoring to support this region that is fully qualified to grow wheat and grains, especially in the central and western Bekaa,” Yassin said.

“We must exert relentless efforts to secure proper agriculture in the Bekaa region. This project will be completed, in cooperation with the Italian Embassy and the World Bank, within the framework of Anjar city’s waste water project,” Yassin added.

Lebanon’s Caretaker Energy Minister delivered a word in which he deemed Zahle’s waste water plant one of the most strategic stations in Lebanon “as it contributes to keeping agriculture sustainable and life honorable in this region.”

However, Fayad warned that the success of this project remained coupled with the ability to secure a 24/7 power supply.

“Therefore, we will look for objective solutions, but the main solution lies in implementing the electricity plan set by the Ministry of Energy,” Fayad added.

Zahle Waste Water Treatment Project has the general objective to improve the sanitation conditions of the Zahle Caza (Zahle city and the villages of Kaa El Rim and Hazzerta) while reducing at the same time the environmental impact linked to wastewater production due to human and commercial consumption, targeting the SDGs. No. 6 (Clean Water and Sanitation), 9 (Built Resilient Infrastructure) and 14 (Prevent and significantly reduce marine pollution).

The specific aim of the project is to eliminate the pollution of the Litani and Berdawni rivers which are touristic sites with several restaurants and recreational activities that shall benefit of the clean water.

Beneficiaries of the project are actually around 205,000 people, reaching 300,000 people for the horizon 2030, living in the municipality of Zahle and in the villages of Kaa El Rim and Hazzerta and other villages in the central Beqaa.

The project has been originally financed in 2005 by the Italian government with a soft loan of 22 Million Euro.

The construction of the project was awarded by CDR to the Italian company Suez Trattamento Acque spa, one of the leading international company in the sector, and the project started Operation and Maintenance on October 2, 2017.

Till now a total of 30 million m3 of waste water has been treated with an average flow of 20,000 m3/day with good treatment level, according to international standards, and satisfactory laboratory results of the effluent at the outlet.

The Government of Italy now is willing to provide an additional financing with a grant contribution of 4 million euros to UNDP in order to ensure the operation and maintenance of the plant, considering the financial and economic crisis that is currently affecting Lebanon.

This new contribution will sustain the running of the project for other two years, with the aims of preserving the environment and increasing the health and hygienic conditions of the population within the area.

It is crucial that all the partners involved, including the local Institutions and Authorities, shall take all the actions necessary for a successful sustainability of the Project, in terms of continuous electrical supply and diesel (in case of cut-offs), sludge disposal and availability of human and financial resources.

In addition to Zahle project, the Italian Cooperation is active with other projects across the national territory in the waste water treatment sector, particularly: Jbeil under construction, Anjar, Harjel and Mish Mish awarded to contactors, and others planned projects are Jbaa, Bint Jbeil, Bakoun, Hasbaya, and Hermel. All such projects will target a total number of beneficiaries of around 700,000 people.

The Italian Cooperation in Lebanon is providing a total financing of 180 million euros for water and waste water projects.