Jumblatt after meeting Aoun: A compromise has become necessary 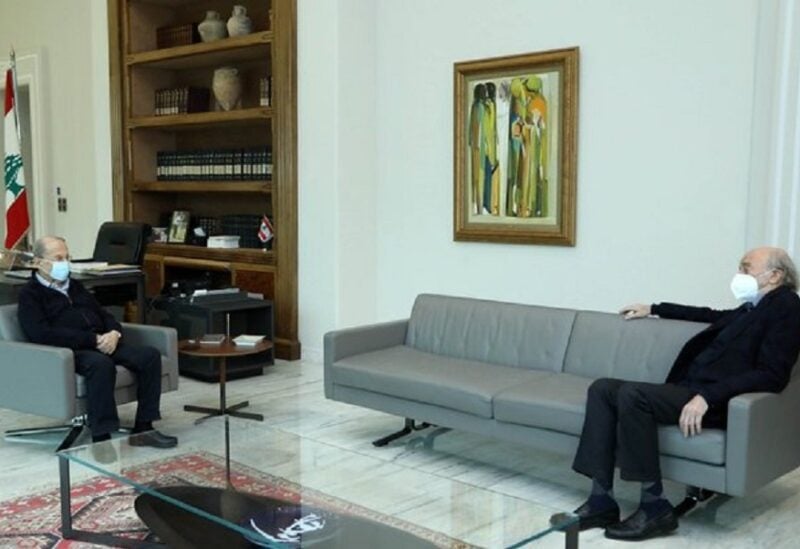 Lebanese President Michel Aoun holding a meeting with the leader of the Progressive Socialist Party, Walid Jumblatt, at the Baabda Palace on March 20, 2021.

Lebanese President Michel Aoun held on Saturday a meeting with the leader of the Progressive Socialist Party, Walid Jumblatt, at the Baabda Palace whereby they discussed the latest developments in the country.

“President Aoun had asked me to meet him and so I accepted the invitation,” Jumblatt said following his meeting with the president, noting that “everyone should leave the past and critical matters behind because the country cannot bear more [tension].”

“You saw me meeting ambassadors of various states but no one is interested in Lebanon. No one should expect anything from any state. We may only rely on what is left of the French initiative. We cannot ask them for more care if we were in such situation.”

Asked about the Druze quota in the government, Jumblatt said “I don’t have a Druze-related demand. Let’s put big issues aside and return to the domestic situation; let us redress the economic situation, fight COVID-19, control the U.S. dollar and the [Lebanese] borders.”

“We have reached absolute deadlock in the midst of economic collapse and hunger,” he said, adding “a compromise has become necessary.” “No one has entrusted me to say these words. This is my personal opinion.”