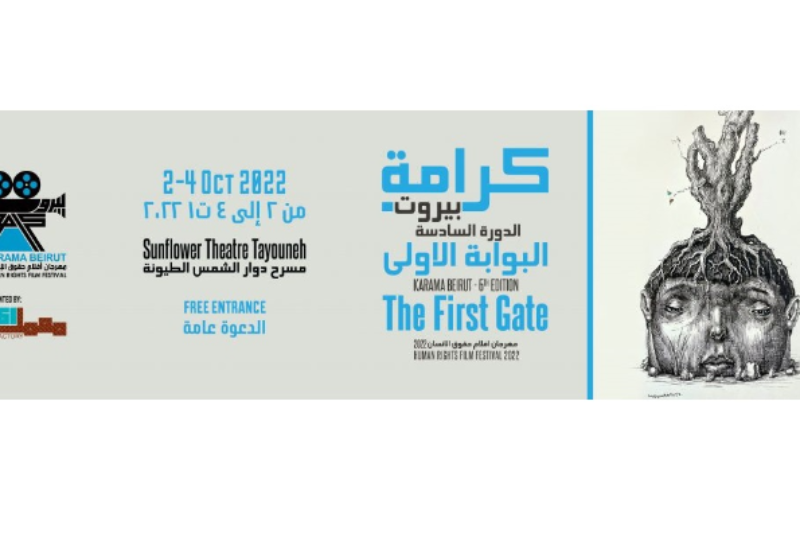 The Karama Beirut Human Rights Film Festival (KBHRFF) kicked-off on Sunday evening at Sunflower Theater in Tayyouneh, Beirut, under the theme “The First Gate” in the run-up to the United Nations Day, which is the day the organization celebrates its establishment when the UN Charter entered into force on 24 October 1945. Organized by NGO “Art Factory 961,” the festival, held in partnership with the United Nations Information Centre in Beirut (UNIC Beirut), the Embassy of the Czech Republic in Lebanon and Umam Documentation & Research organization witnessed the participation of a group of actors, actresses, directors, students and a number of local, regional and international media outlets and was an opportunity for the audience to meet international filmmakers and share- experiences.

KBHRFF Director Haytham Chamass believes that the festival in its sixth session this year is distinguished by “the fact that it was successfully organized, and we managed to host international directors despite all challenges resulting from the financial and economic crises that Lebanon is reeling under.”

“Organizing this festival in partnership with UNIC Beirut in the run-up to UN day is an important step that the festival is taking to re-assure its support for human rights and peace in Lebanon, the region, and globally,” he adds. Over three days, the festivalfeatures six films, including five long documentaries and one short feature, with some panel discussions with directors. Chamass believes the panel discussions to be “very useful sincethey pave the way for the audience to reflect on the films”. The films featured in the festival came from various countries, including: Jordan, Libya, Czech Republic, Ireland, Poland, Denmark, Germany, and Peru.

The festival focuses on the importance of reconciliation in moving towards a more peaceful and just society for everyone by presenting films that shed light on individuals who experienced violence in the past or are experiencing it in the present. It also presents films that discuss the effects of war, such as displacement, and documents personal and collective attempts to put an end to injustice and violence. “The crisis that Lebanon is witnessing pushed us to think about ways that led to this situation, and we found that missing the step of reconciliation with the past obstructed the improvement of Lebanon and its people; therefore, we chose this title to raise awareness on the importance of this step to build a better present and a better future.”

The opening ceremony involved the screening of “Young Plato,” a film that received several international awards and that is directed by Irish Director Dilan McGrath visited Lebanon for the first time to participate in the festival. The film sheds light on the importance of independent thinking in resolving conflicts, especially in regions that witnessed wars such as Northern Ireland. By focusing on the importance of philosophy in the lives of children, “Young Plato” presents a model for building a peaceful culture in hard times. The film was followed by a Q and A session.

Attracted by the theme “The First Gate” and the relevance of the issue of reconciliation to Lebanon, several local actors attended the festival. Abdelrahim Awji from Lebanon considered that “reconciliation is an essential step for building a more stable and peaceful present and future, and that it starts from reconciling with oneself.” He adds: “everyone has to admit their mistakes to be able to build a healthy relationship with their surroundings and communities.”

For her part, Lebanese actress and Head of Shams NGO Bernadette Houdeib said, “reconciliation with oneself is essential for building peaceful societies, and this is one of the essential requirements at the moment given the wars and crises that we have been witnessing since the COVID-19 pandemic.”

“UN support to such festivals is essential but we also need the Lebanese government’s support to cultural issues for a healthy social life.”

Polish Director Hanna Polak who is participating in the festival through her film “Angels of Sinjar” mentions that “reconciliation starts with holding the ones who committed crimes accountable, while the next step is understanding past events and learning from them.” In her film, Polak highlights the story of Hanifa, a young Yazidi girl who survived an attack by ISIS on a religious and ethnic Yazidi minority group in Sinjar, northern Iraq. Polak, who was nominated to Emmy and Oscar awards, documented Hanifa’s experience trying to find her three sisters abducted by ISIS.

The festival concludes today with the screening of “Angels of Sinjar,” which will be followed by a discussion with Polak and Hanifa. The closing ceremony will also involve a panel discussion entitled, “The Fourth Perspective: Narrating MENA Prisons from Beirut.” The session sheds light on the importance of merging art, academia, and advocacy work while debating cultures and histories of incarceration in the MENA region.

A group of university students majoring in journalism and filmmaking volunteered in organizing the festival. “Volunteering at this festival was a chance to practice the skills that I have learned at university including photography and writing short news. This occasion was also a chance for me to network with journalists and activists around filmmaking and media in Beirut,” said Charbel Tamer, a journalism student at the American University of Science and Technology (AUST) in Beirut.