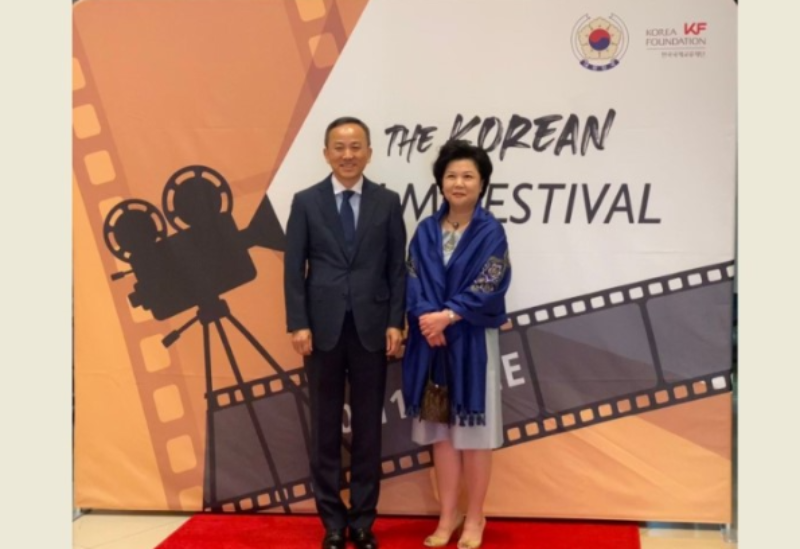 On June 10-11, the Ambassador of Korea, H.E. IL Park, attended the inauguration of the 2022 Korean Film Festival at Grand Cinema – ABC Ashrafiyeh. The Korean Film Festival in Lebanon, presented by the Korean Embassy in Lebanon in partnership with the Korea Foundation, screened two films: “Juror 8” and “Luck-Key.” Each screening drew more than 180 attendees.

At the inaugural ceremony held, Ambassador Park highlighted the fact that the film industry is not only a contributor to the economy but a cultural bridge between Korea and the world. “Over the years, the Korean Films have been well received and loved by many people in every corner of the globe”, he said.

Ambassador Park added that Due to its extensive outreach, Korean Films have contributed to the popularization of the Korean language, cuisine, music, and tourism.

He expressed his interest in finding out that despite the geographical distance, there are in Lebanon Korean Culture Clubs with thousands of Members. “This is a proof that culture can transcend geography to bring people closer together”, he added.

Korean Ambassador to Lebanon confirmed that a variety of cultural events will be held this year in Lebanon in order to strengthen more bilateral relations.

Below are the films synopsis:

Juror 8: Based on a true event, the 8 juries deliver the very first verdict in Korea.

On the day of the 1″ Citizen Participation Trial, all media’s attention is focused on this very first jury trial in Korea’s juridical history. Randomly selected 8 citizens are called up to rule a matricide case which is almost determined with conclusive evidences. While the judge waits for the 8 juries’ unanimous vote for “Guilty” to determine the conviction, these way-too-passionate juries start to overturn the case raising questions that had never been asked in the court.

Luck-Key: A hit man Hyung-wook, an infamous assassin known for his perfection, slips on soap at a public sauna and passes out. Jae-sung, a not famous unknown actor who’s hit rock bottom, witnesses the accident and switches his locker key with Hyung-wook’s. Jae-sung opens the locker to find the key to a fancy car which leads him to a luxurious condo along with the full wealth and secrets of a successful hit man.

On the other hand, Hyung-wook wakes up with amnesia. And the only clue he has for his identity is an outstanding payment bill.