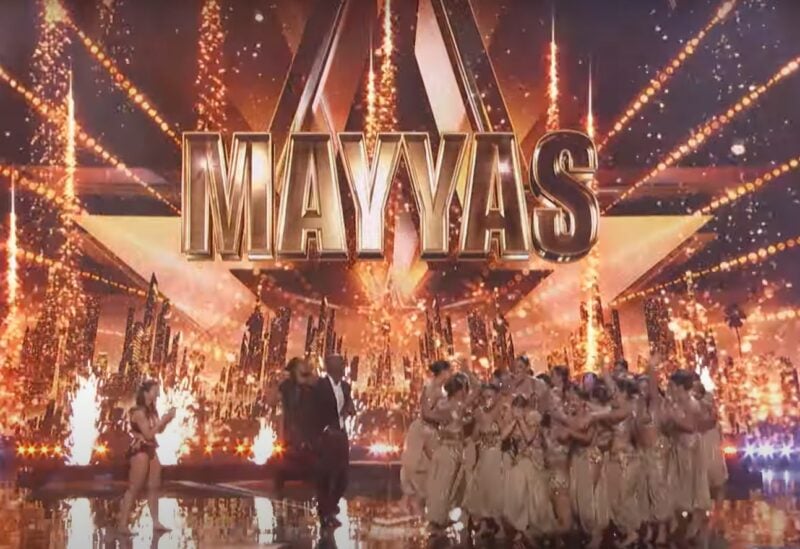 The group is taking home the $1 million grand prize. (YouTube)

The wait is over — Lebanese dance crew Mayyas has won season 17 of “America’s Got Talent.”

With confetti falling and the audience cheering, Mayyas jumped sky-high as the ensemble heard the news and won the renowned contest, taking home the $1 million grand prize.

For their final performance, the group joined forces with pole dancer Sellars and presented an 80 second dance that got the crowds cheering.

“IM SO PROUD, @mayyasofficial YOU DESERVE THIS!!!!” tweeted Sofia Vergara after the group were crowned winners.

The audience held up the Lebanese flag in the hall as they cheered for the crew.

“Fabulous. Another level,” said judge Vergara, who gave Mayyas the golden buzzer after the first audition in June.

“This is what a million dollars looks like,” said Klum. “You brought your A game every time you came and tonight it was A plus.”

Cowell said their show was “astonishing.”

“Something has happened with you where I’m beginning to feel a buzz beyond the show,” he added. “This has landed. It’s global. It’s huge. I don’t think you can top that.”

Mandel said: “This is my favorite act ever on AGT.”

“That’s so great for you. It’s great for women, female empowerment, your culture,” he added.

After winning the golden buzzer, the group started receiving strong backing from their Lebanese fans. The Lebanese Broadcasting Corporation International launched an advertising campaign in the US with the slogan “Kermalak Ya Lebnen” — which translates to ‘For You Lebanon’ — to promote and support them.

LBCI backed Mayyas with adverts on its TV and social-media channels, and also worked with local and Arab media outlets in the US to support the campaign.

In an interview with Arab News, the group’s choreographer Nadim Cherfan said: “The Lebanese people around the world have shown us huge support.”

“We’ve been getting tons of messages. Everybody is backing up Mayyas. Everybody is rooting for Mayyas. So I’m really thankful for the Lebanese diaspora that is being really supportive for Mayyas,” he added.

It is not just from ordinary supporters, but celebrities were also voting for the group.

“May you return with the title,” wrote Lebanese singer Maya Diab on her Instagram Stories after their final performance. “You raised the name of Lebanon by just showcasing art in this beautiful way that made the world talk about it. We love you and we are proud of you no matter what the result is.”

Superstar Haifa Wehbe also supported the group ahead of the final result.

“Mayyas wowed ‘America’s Got Talent’ judges and audience with a spectacular performance. Keep voting,” she said.

This is not their first talent show experience for Mayyas.

Cherfan, who was 14 when he fell in love with the world of dance, formed the group in order to compete in the sixth season of “Arabs Got Talent.” And despite being newcomers, the group dazzled, wowing judge and Lebanese singing superstar Najwa Karam who awarded them entry to the final with her ‘golden buzzer’ and they were ultimately crowned champions.

“I chose a female crew, because I wanted to deliver a message about female empowerment, as we all know that, even today, Arab women are still called names for being dancers. I wanted to prove how elegant, refined and beautiful dancing is,” Cherfan said in an Arab News interview at the time. “And who’s better than these gorgeous ladies to do so?”

But winning one of the most prestigious talent awards in the Middle East wasn’t enough. With success came self-inflicted pressure to do even better. “The golden buzzer, the standing ovation, the beautiful comments of the judges, and winning the title itself are challenges, because they are stress and responsibility — in those moments (all I am thinking is) ‘What’s next? How can I do better?’”

The response from the judges and audience was overwhelming. “Absolutely genius — brilliant, inventive… (I’ve) never seen a dance like this ever on one of these shows,” said judge Simon Cowell at the time.