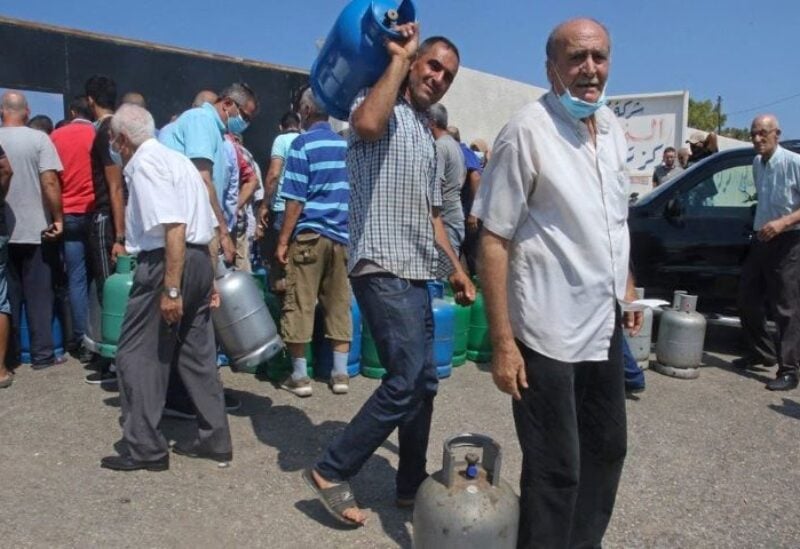 Lebanese wait to fill their gas cylinders in the southern city of Sidon amidst a deepening economic crisis, on August 10, 2021. (AFP)

Lebanese stood in long queues Tuesday to purchase cooking gas following warnings of imminent shortages, as an economic crisis eats away at supplies of basic imports.

Lebanon, grappling with an economic crisis classified by the World Bank as one of the world’s worse since the mid-19th century, has been hit in recent months by outages of basic commodities from medicine to fuel.

Cooking gas, usually sold in cannisters and used widely in homes and businesses for cooking and heating, had been readily available in the market. But importers warned it would soon join the list of scarce goods, prompting a country-wide panic.

“Our current stock will last one week,” said Farid Zeynoun, who heads a syndicate of petroleum gas distributors.

“After which, if no solution is found, gas used in homes will be sold on the black market.”

Zeynoun attributed the crisis to a delay by the central bank in opening credit lines to fund imports.

Gas is subsidized by the government with a set price, but dealers warn that if official supplies run dry, prices could shoot up by more than a third.

Foreign currency reserves are rapidly depleting, forcing the country to scale-down imports to shore up the little money it has left.

Zeynoun said that a vessel carrying 5,000 tonnes of liquified petroleum docked in Lebanese waters 17 days ago, but is awaiting approval by the authorities to unload its cargo.

“Importing companies have stopped meeting our gas needs,” said Walid al-Hayek, the head of a gas distribution company, according to NNA.

In the southern city of Sidon, people flocked to a local gas supplier to refill their cannisters.

“Is there anything more humiliating than this?” asked Mohammad Ali Hasan, one of those in the queue, waiting for hours under the scorching sun.

“We use gas… to cook for our children… we will soon wait in line for water.”