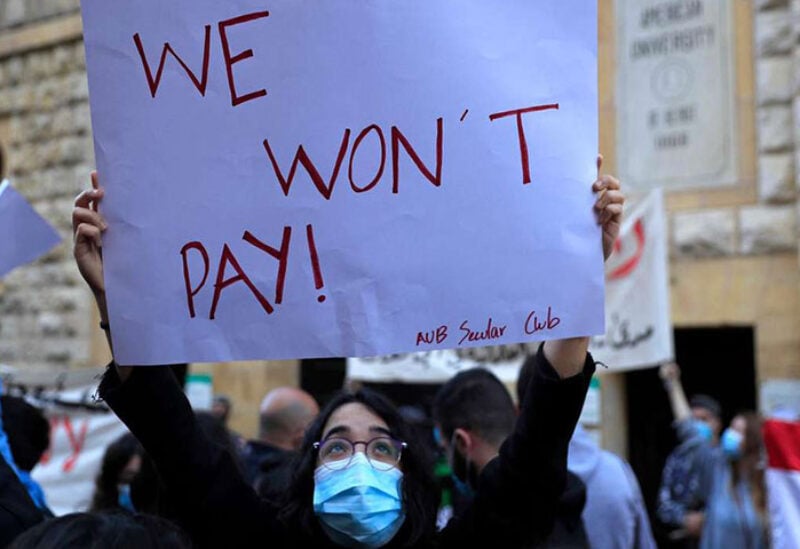 When the American University of Beirut (AUB) said the cost of study at the university would more than double, the 21-year-old student Ali Slim felt his dream career in medicine might end before it had even began.

Like the majority of the Lebanese, his parents are paid in local currency, which has tumbled in value against the dollar due to the country’s financial collapse, making most of them  unable to bear the 160 percent tuition increase for their son.

The AUB has increased financial aid for students, but it said the crisis had made the hike in fees unavoidable.

Another top school — the Lebanese American University (LAU) – soon followed suit, prompting fears that thousands of students like Slim could be priced out of private higher education in a country with only a single, under-funded, public alternative.

So the students got together and vowed to act.

Along with scores of fellow students, Slim mounted legal action in February to pay fees at the official rate of 1,500 Lebanese pounds per dollar, rather than the semi-official rate of 3,900 pounds per greenback used by the universities.

“It’s not just a fight for education, it’s a fight for what’s right and to try to get the judicial system to protect the most vulnerable,” Slim told the Thomson Reuters Foundation.

When students began paying at the official rate, the AUB refused their payments and said they would need to pay the new rate — or be dropped from class.

Students then filed two suits: one affirming their right to pay fees at the official exchange rate, the other asking for a stay on all payments until the first case is settled.

An urgent matters court ruled in their favor on the second case, saying the AUB could not exclude the students until there was a final ruling on whether their payment was legal.

The AUB’s office of communications said no students had left due to the hike and that more than 99 percent had paid their fees.

As other universities ponder similar hikes, the court’s ruling could have far-reaching implications for tens of thousands of students nationwide.

“We’re basically looking to secure a social safety net that protects students most at risk. That doesn’t exist right now,” said Jad Hani, a 20-year-old economics senior at the AUB.

Following the price hike, annual tuition fees for an arts or sciences degree have risen from about 35 million LBP to about 90 million LBP.

The minimum wage in Lebanon is 675,000 pounds per month, equivalent to 8.1 million pounds per year.

As the crisis decimates household incomes, an unusually large number of students appear to be opting for the publicly funded Lebanese University (LU) over private institutions – a change its president, Fouad Ayoub, linked to “economic factors.”

Some 5,000 students joined this year, after the price hikes were announced, he said, far more than its average intake and swelling the overall student body to 87,000.

The university cannot meet such demand, Ayoub said, since its budget is unchanged but its spending power has crashed in tandem with the local currency.

It has struggled to buy even the basics — lab supplies, electronics and books — as suppliers held off bidding on contracts for fear of the volatile exchange rate, Ayoub said.

“We are rationing the use of paper. The situation is very difficult,” he said.

The LU is not alone in being crippled by issues that are ultimately tied to the increasingly bankrupt Lebanese state.

The AUB said it was owed some $150 million by the state, making its dire situation still worse.

“AUB, like the rest of the country, is having to cope through a crisis not of its own making and without any support,” the university said in written comments.

Still, it has ramped up financial support leading to reductions in tuition costs, helping some 4,000 students — almost one in two — enrolled this academic year.

To ensure it can survive another 150 years, the institution said it had no choice but to up the exchange rate, insisting the new semi-official rate — used for transactions at commercial banks — was anyway still far below the volatile market rate.

With no end in sight to the country’s financial collapse, students said they felt compelled to help each other.

Razane Hishi, a 19-year-old software engineering junior at the AUB, said she chose to join the exchange rate legal fight out of solidarity, rather than need.

“It’s a moral obligation for me to help protect others that may need this now,” Hishi said. “If the trend keeps going, how are any of us supposed to afford an education in the future?”