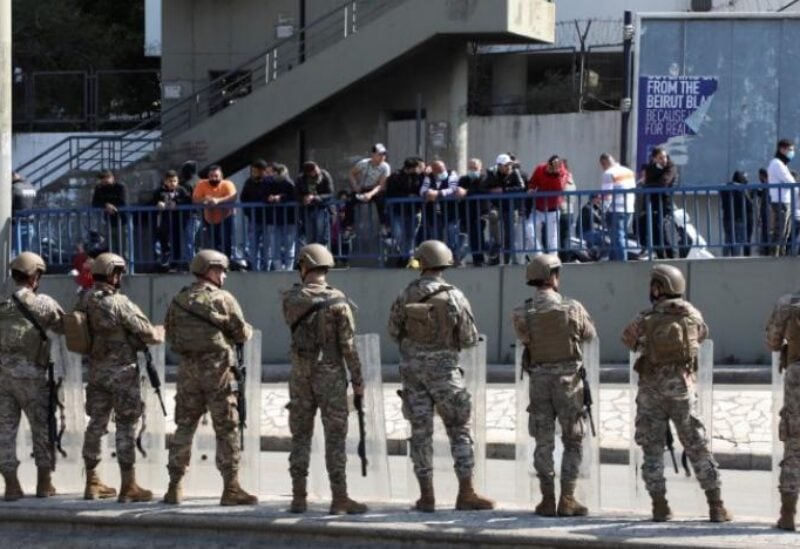 Lebanese army soldiers are deployed during a protest against the fall in Lebanese pound currency and mounting economic hardships in Beirut, Lebanon March 8, 2021. REUTERS/Mohamed Azakir

The death of a Syrian young man under torture inside a state security prison in southern Lebanon sparked confusion at the security, judicial and political levels, and brought back to the fore the file of torture in pretrial detention centers.

Lebanese sources told Asharq Al-Awsat that the arrested Syrian, Bashar Abdel-Saud, “died less than three hours after his arrest.” He was questioned on suspicion of leading a terrorist network working for ISIS.

In view of the uproar caused by the death of the detainee, and following the spread of photos of the corpse showing traces of torture, the State Security body quickly issued a statement to alleviate the impact of the incident.

“The General Directorate of State Security, which is always keen on credibility, objectivity and transparency, clarifies that as a result of the investigations it conducted with the members of the cell, they confessed information that led to the arrest of their (deceased) associate,” the statement said.

It added: “During the interrogation, he admitted that he belonged to the terrorist organization (ISIS).”

The directorate said that the death incident was referred to the “competent court”, under its supervision, and that the court was responsible for revealing the results of the investigations and issuing a legal ruling.

In remarks to Asharq Al-Awsat, Akiki said that he ordered the detention of the officer who heads the State Security Office in Tibnin, where the incident took place, and four of the office’s personnel pending investigation.

“The forensic doctor’s report proved that the Syrian detainee died as a result of the severe torture he was subjected to, the effects of which appeared on the body,” he noted.

In a statement issued on Aug. 29, the State Security announced that it had “arrested a cell affiliated with ISIS operating between southern Lebanon and Beirut.” It added that the cell fought in Syria, and moved to Lebanon illegally.