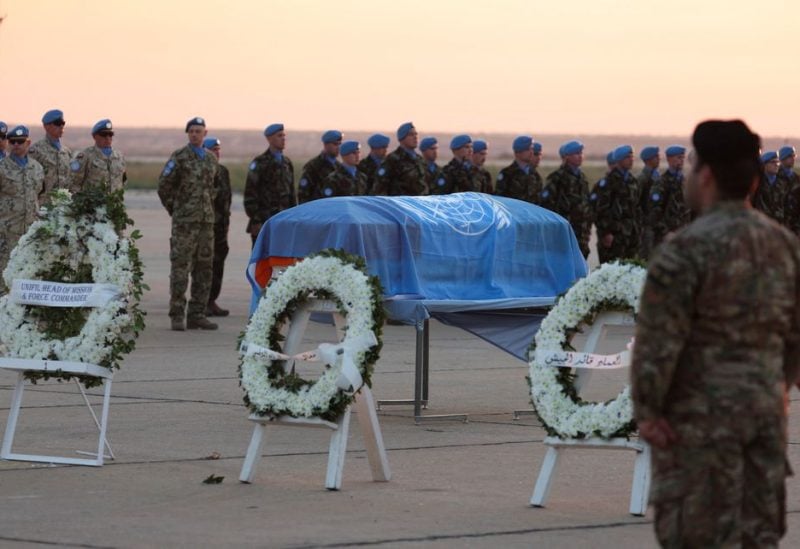 Wreath of flowers are placed near the coffin of Irish soldier Sean Rooney who was killed on a U.N. peacekeeping Patrol, during repatriation ceremony at Beirut international airport, in Beirut, Lebanon December 18, 2022. REUTERS

In a move coordinated with the potent armed organization Hezbollah, the Lebanese army seized over the weekend a key suspect in the recent murder of an Irish U.N. peacekeeper, according to two security sources and a Hezbollah official.

The man is not a member of the militia supported by Iran or of the powerful political party, the Hezbollah official told Reuters.

According to the security sources, the individual was suspected of opening fire on a UNIFIL truck that was moving through south Lebanon on December 15.

Private Sean Rooney, 23, was killed in the incident, the first fatal attack on U.N. peacekeepers in Lebanon since 2015.

On Dec. 16, Ireland’s then-foreign and defence minister Simon Coveney told state broadcaster RTE that he did not accept Hezbollah’s assurances that it had no involvement.

“We don’t accept any assurances until we have a full investigation concluded to establish the full truth,” he said.

UNIFIL has operated in Lebanon since 1978 to maintain peace along its border with Israel. It was expanded after a U.N. resolution that halted the 2006 Israel-Hezbollah war in southern Lebanon.