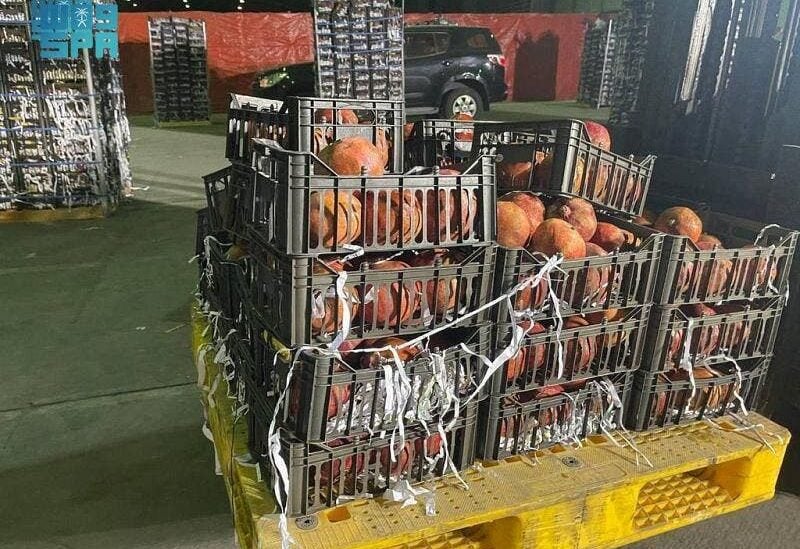 BEIRUT: Lebanon has pledged to punish drug smugglers after large quantities of narcotics were intercepted and seized by Saudi Arabia and Greece, Arab News reported.

On Friday, Saudi authorities reported thwarting an attempt to smuggle millions of amphetamine pills stashed in a pomegranate shipment from Lebanon at Dammam’s King Abdulaziz Port. They said 5 people involved in the case were detained, 4 citizens and an expatriate.

There was another interception of a pomegranate shipment, also from Lebanon and containing drugs as well, in Jeddah.

Shortly after the Saudi statement, Greek authorities announced seizing 4 tons of cannabis hidden in dessert-making machinery at Piraeus that was en route from Lebanon to Slovakia. The value of the drugs was estimated to be roughly €33 million ($39 million).

The Greeks said they received help on the case from Saudi Arabia’s drug enforcement agency.

Lebanon’s Foreign Ministry said in a statement that smuggling drugs in trucks or containers carrying fruit and vegetables from Lebanon to foreign countries was punishable by law. “Smuggling drugs harms the Lebanese economy, farmers and reputation,” the statement added.

The ministry called on authorities to exert “utmost efforts” to control all smuggling operations on border crossings in light of the laws that criminalized drug use, trafficking and smuggling.

Saudi Arabia said Lebanese fruit and vegetable imports would be banned from Sunday because authorities had noticed a surge in smuggling operations targeting the Kingdom using Lebanese products.

Walid Al-Bukhari, Saudi Arabia’s ambassador to Lebanon, said the security and safety of the country and its people were the motives behind the ban.

“Drug smuggling into the Kingdom reveals the extent of the challenges from local and international criminal networks being faced by Saudi Arabia,” Al-Bukhari told local media.

A security source told Arab News that the seized cargo was not Lebanese but had a Syrian certificate of origin, transiting through Lebanon from Syria between April 10 and 15.

Ibrahim Tarshishi, head of the Bekaa Farmers’ Association, said Lebanon’s agricultural producers were innocent of smuggling drugs into the Kingdom, which imported over 50,000 tons of Lebanese produce every year.

He voiced his concerns about the ban’s impact.

“Lebanese authorities must contact their Saudi counterparts the soonest possible to confirm that Lebanon has no intention whatsoever of harming the Kingdom,” he told Arab News. “Saudi Arabia is the largest importing country of our agricultural produce. Exports were supposed to kick off in May. The Saudi decision means that our exports will not reach further than Jordan and will not be transited through the Kingdom to the rest of the Gulf states. This is a disaster that threatens the whole agricultural sector in Lebanon.”

Lebanon did not have pomegranates to export and had been importing them from Syria, Tunisia and Egypt for the last 20 years, Tarshishi said.

“We export our vegetables, citrus, peaches, pears, apricots and cherries to Saudi Arabia. This export relationship with Saudi Arabia was established 50 years ago and the exports are carried out by land, sea and air, and our work is completely legal.”

Non-Lebanese agricultural cargo had transited through Lebanon and the drugs that were seized turned out to be smuggled in Syrian trucks, he said.

“Lebanese farmers have nothing to do with this matter. The cargo is controlled by Lebanese Customs. They go through a scanner at the Masnaa border crossing with Syria. However, scanners at Beirut airport have been damaged since the Beirut blast on Aug. 4. New scanners were provided but have not been installed yet. Therefore, cargo is emptied at the free zone where a customs’ member handles the cargo before they are shipped.”

In a statement, the founding committee of the Lebanese-Saudi Friendship Association expressed regret over the actions that had led Saudi Arabia to introduce the import ban. It was “proof of the regressive level” that Lebanon had reached due to some people trying “to take control of the country and its assets and seeking to jeopardize its public institutions,” the statement read.

Lebanon’s security apparatuses have pounced on several drug factories, especially ones producing Captagon pills in the Bekaa valley, as well as drugs to be smuggled abroad.

On April 10, Hassan Daqou was detained over suspicions of drug dealing, production and smuggling. He is from the town of Tufail, which is 57 kilometres from Damascus.

The former mufti of Baalbek, Sheikh Ayman Al-Rifai, said the Hermel region suffered from drug use, dealing and production.

“This has led to several social problems and family issues that we are trying to solve,” he told Arab News, saying he wished that authorities would carry out more arrests and raids.