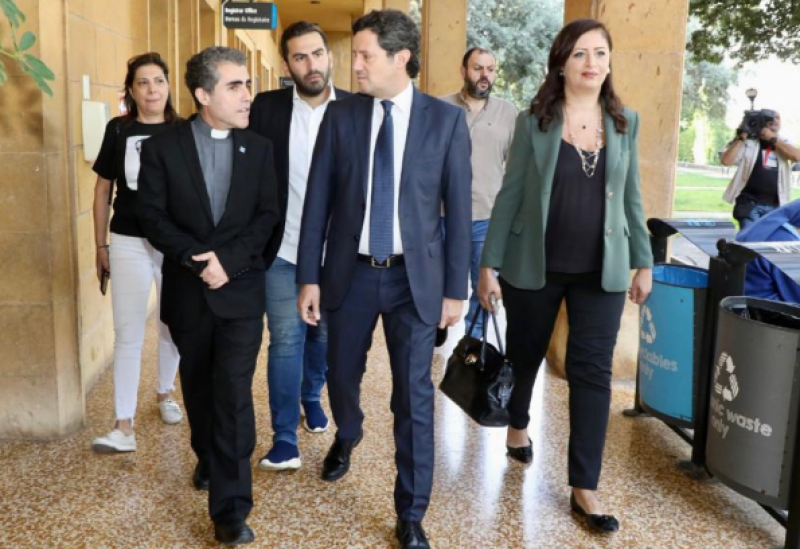 The visit aimed to discuss the possibility of concluding a joint cooperation protocol between the University and the Ministry of Information, to benefit from the expertise of the University and to provide training for USEK students in the various Ministry’s directorates, including “Tele Liban”, “Radio Lebanon”, “National News Agency” and the Ministry’s Directorate of Studies and Publications, in addition to cooperation with the University’s Phoenix Center for Lebanese Studies in order to preserve the ministry’s archive.

The meeting also discussed the educational situation in Lebanon and the difficulties the sector is experiencing during this crisis, with emphasis on the importance of proper planning and guidance for students.

Father Hashem gave an overview of the University and the progress it witnessed, shedding light on the University’s various faculties and specializations, especially those related to media.

Afterwards, Minister Makary toured the University premises, whereby he visited the University’s Public Library, which is one of the most important and richest libraries in the Middle East. Father Moukarzel gave a briefing on the library departments, especially the Phoenix Center for Lebanese Studies, which contains the archives, manuscripts and books section.

Speaking during the tour, Minister Makary said: “Our visit today is to discuss cooperation with the University in everything related to the media, design, photography, film and television specializations, in addition to preserving the heritage.”