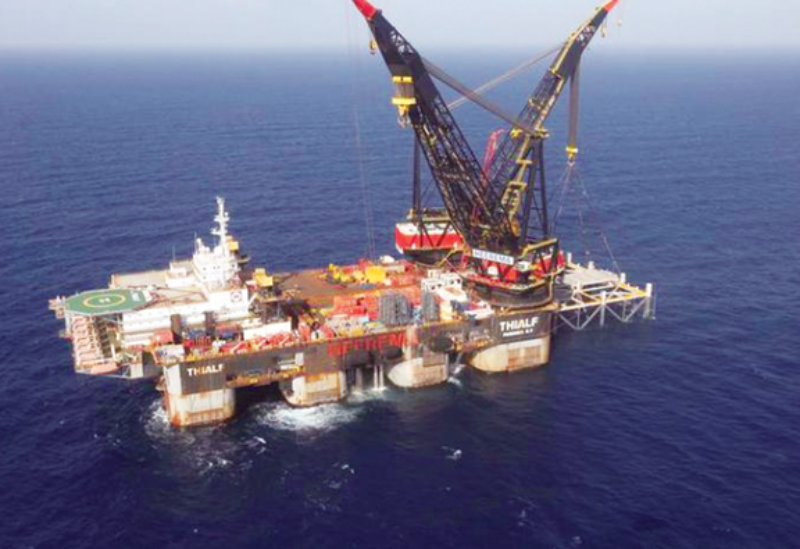 Lebanon and Syria differed over a maritime area of about 860 square kilometers, known as Block No. 9, based on a map sent in 2011 to the UN.

BEIRUT: The Syrian government signed a four-year contract with a Russian company for oil and gas exploration in the Mediterranean Sea that could spark a new border crisis between Syria and Lebanon, Arab News agency said in a report on Wednesday.

The 2 blocks to be explored under the new contract overlap with Lebanese maritime areas for energy exploration along the country’s northern border.

According to this demarcation, Syria grabbed a Lebanese area of 750 square kilometers from Block No. 1 alone, where the Russian exploration process is due to begin.

Lebanon had demarcated its maritime borders in 2011, and launched in 2014 a round of primary licenses and invited bids for Block No. 1 in the north. Nonetheless, Syria did not recognize the Lebanese demarcation.

For years, Lebanon was busy demarcating its southern land and maritime borders with Israel. Last November, Israel accused Lebanon of changing its position 7 times concerning the demarcation of the maritime borders, which led to indirect negotiations that were held under U.S. and U.N. supervision.

The two countries differed over a maritime area of nearly 860 square kilometers, known as Block No. 9, based on a map sent in 2011 to the United Nations. But it turned out subsequently that the map was based on wrong approximations. In the most-recent negotiations, Lebanon demanded an additional area of 1,430 square kilometers, including part of the Karish field.

During negotiations with Israel, Lebanese President Michel Aoun told his delegation to “adhere to and defend the internationally recognized Lebanese rights.”

Yet the concern for the southern borders with Israel has not been shared for the northern borders, despite the Russian-Syrian agreement getting signed March 1.

“Lebanon’s demarcation of its borders came by decree, which is an internal legislation issued under Lebanese national laws, and it has no mandatory character,” Bashar Jaafari, Syrian permanent representative to the U.N., said in his 2014 objection to the Lebanese demarcation.

Marc Ayoub, an expert on energy affairs in Lebanon and the Middle East, told Arab News that Lebanon must inform Syria of its objection by the available means.

“It could be through the Syrian ambassador to Lebanon or a visit by the Lebanese foreign minister to Syria,” Ayoub said.

“If Syria refuses to acknowledge this objection, Lebanon must resort to the U.N. to object to any exploration process that will take place. It can request a halt to exploration if Lebanon presents documents proving its ownership of these areas.”

An apparent silence from Lebanese officials with regards to the maritime border issue was met with political backlash from those who oppose the ruling class in Lebanon.

Lawmaker Roula Tabsh, from the Future Movement bloc, said: “Where do the official Lebanese authorities stand on this issue? What is this suspicious coma? We waited for the violation from the south, from the enemy, but it came from the north, from a brotherly country.”

“The government and the relevant ministries are required to have a sovereign position and clear clarification,” said Richard Kouyoumjian, former minister and serving member of the Lebanese Forces parliamentary bloc.

Kouyoumjian called for the “resumption of demarcation negotiations in the south, an end to Syrian complicity and plundering of our money and oil wealth.”

Druze leader Walid Jumblatt pointed out that Lebanon’s Parliament Speaker Nabih Berri worked for 10 years to define the country’s southern border and was surprised by “the death of the demarcation” of the maritime borders with Israel.