Massive felling of trees in Kfar Roummane: The case before the courts 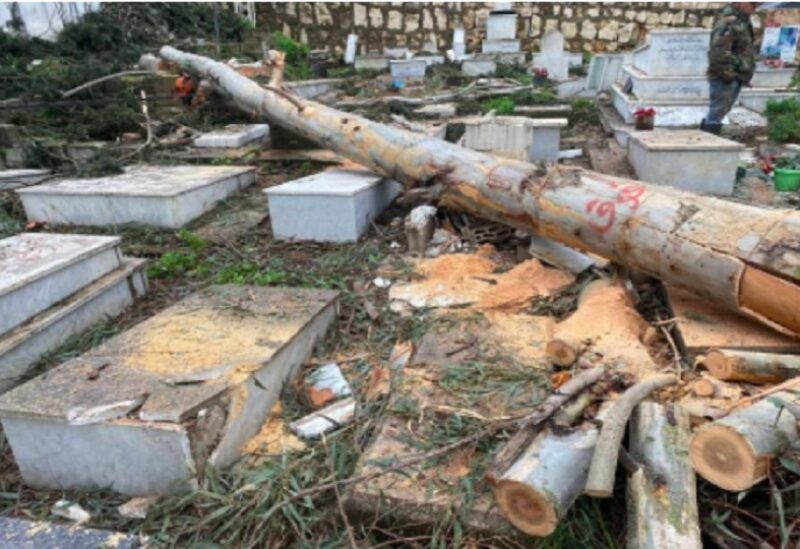 A massive felling of trees in the village of Kfar Roummane, in the Nabatieh district, has caused a scandal in recent days in the media and on social networks. Photos and videos showing several apparently old felled trees in a cemetery in the village square have angered residents and many activists, who described the event as an “environmental massacre.”

What really happened? Ambiguity prevails in the case, and there are several versions of the story. But the only certainty at this stage is that the Shiite waqf (“endowment” in English), which runs the cemetery, received a permit to prune and fell a specific number of trees from the Agriculture Ministry.

“The request was about ficus trees, which are not protected by law,” an official source familiar with the case told L’Orient-Le Jour. “However, the ministry received complaints and found that the felled trees are in fact pines, cypresses and eucalyptus,” the source added, saying that an official report was prepared and that the case was transferred to the public prosecutor in charge of environmental matters in the South.

“I cried when I saw this massacre”

Mahmoud Salameh, son of the vice-mayor of Kfar Roummane, has followed the case closely from the start. It was him who lodged a complaint with the Agriculture Ministrywhen he discovered that around 30 trees had been felled.

“The endowment obtained a permit to prune and fell nine ficus trees and three eucalyptus trees,” Salameh told L’Orient-Le Jour. “As the work began, I noticed that mistakes were being made … I then contacted the director of the forestry department in South Lebanon, who immediately contacted the ministry, asking that the work be temporarily stopped. Representatives from the ministry were sent to the site, and determined the trees to be pruned and those to be felled, as well as the way to proceed in each case. This was in the presence of Sheikh Ghaleb Daher [who is in charge of the endowment] and the municipal police,” he continued.

However, according to Salameh, the endowment did not respect the ministry’s instructions and cut down around 30 100-years-old trees in the village cemetery. “The officials concerned took advantage of the two day storm and committed this crime early in the morning without attracting the villagers’ attention,” Salameh said, angrily. “I cried when I saw this massacre,” headded, bitterly.

Salameh said that he then contacted the Agriculture Ministry, which visited the site and wrote an official report. “We urge the judge to take a firm decision that would deter any future crimes of this kind. As far as I am concerned, I will not drop the case,” he concluded.

Commenting on the issue, Sheikh Daher, imam and head of the Shiite endowment in the village, and therefore the person most concerned with this case, denied these accusations outright while denouncing the media, saying it had published a completely distorted version of the story and made him look like “an enemy of the environment.”

Sheikh Daher said that many residents living near the cemetery complained about the exaggerated spread of these trees’ branches, which had become a shelter for bats and insects, according to them.

However, he added, some trees which had damaged tombs, as well as some dead and diseased trees, were cut down, and that the cedars and other healthy trees were preserved.

“How am I supposed to find space to bury the dead properly without touching a single tree branch? Who would accept that their loved ones rest in a tomb that is being completely damaged by the trunk and roots of a poorly maintained tree?” he said.

Sheikh Daher referred to the lack of space in the cemeteries of Kfar Roummane, as is frequently the case in villages where the population grew over the years. “I don’t know if these people who gave the media a distorted version of the story have political considerations, but this is not the first time that trees were pruned in the village,” he said, without giving further details.

The sheikh said that “the cemetery is not a public garden,” and added that pine trees will be planted around the site, as is done in “modern” cemeteries.

The argument that there is not enough space in the cemetery did not convince the activists. For Salameh, the work was not necessary and does not free up additional places in the cemetery. He indicated that a permit to build a new cemetery was obtained two months ago. The Sheikh confirmed this information.

Speaking to L’Orient-Le Jour, Journalist Kamel Jaber, who hails from Kfar Roummane, said that in order to create additional places in the cemetery, it is necessary to cut down and completely uproot trees. In other words, “the officials concerned planned, from the start, to commit this crime and hid behind a pruning permit to destroy one of the last green spaces in the village,” he said.

For his part, the president of the Kfar Roummane municipal council, Hayssam Abou Zeid, said that there was indeed “a mistake,” but believes that it was probably done by the workers in charge of the project. “The sheikh probably was not aware of the mistake made by the workers he had entrusted with the pruning,” he said. He added that municipal police officers have made sure that the work has been halted pending a decision from the environmental prosecutor’s office.

Commenting on the argument that there is not enough space, Abou Zeid confirmed that all the required permits were granted by the ministries concerned in order to build a new cemetery on state-owned land, and was made possible by numerous donations.

For their part, activists are wondering whether or not, behind these “mistakes,” there is a desire to sell the cut wood which today is very expensive because it is very popular in a market where fuel oil prices have soared. Sheikh Daher vigorously denied anything of the sort, and denounced these accusations as defamatory.