Muslims feel the pinch of Lebanon’s economic woes for Eid 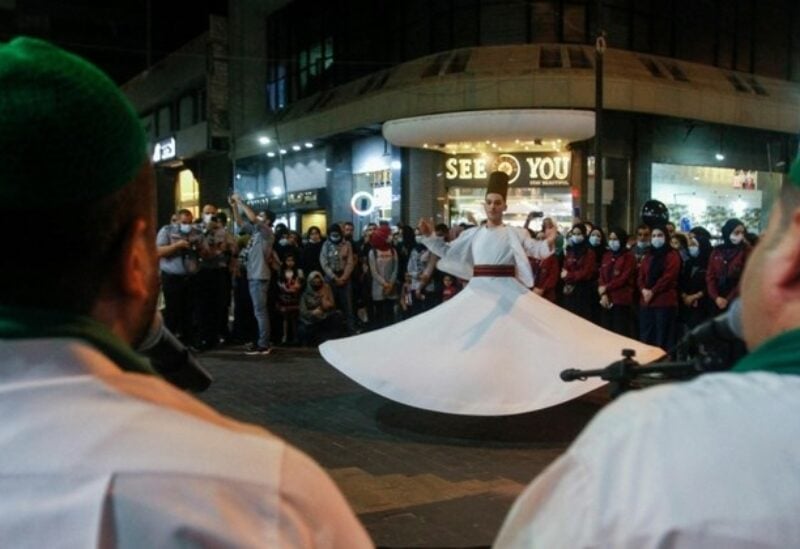 People watch a whirling dervish perform during the Muslim holy month of Ramadan, a tradition ahead of the Fitr feast, in Lebanon's southern city of Saida

SIDON/BEIRUT: Mona Moukhala from Bourj Abu Haidar wishes she could buy new dresses for her young daughters for Eid al-Fitr, the celebration marking the end of nearly 30 days of Ramadan for Muslims.

“There is this Lebanese word, taateer, [misery] which is what Eid is for me this year,” she said to The Daily Star as she worked in her jewelry shop with her two daughters and elderly mother sat around her.

“I would like to buy my daughter a nice dress and a pair of shoes for Eid, but I have two daughters,” Moukhala said, while adding she would need a lot more money than she has to buy new outfits for both her children.

Eid is set to take place on either May 13 or 14 this year, dependent on the sighting of the new crescent moon.

Food, presents and social gatherings are traditional during Eid as families come together to celebrate after a month of fasting and spiritual reflection.

But this year, festivities are likely to be modest as the economic crisis, now in its 18th month has caused punishing inflation.

Figures released by the Central Statistics Department showed that the prices of clothing and footwear has jumped to 6.6 times higher in December 2020 than the same period the previous year.

“And for Eid we have to look well dressed, nice clothes, accessories etc. But now we go hunting for what is the cheapest” Moukhala said.

Her modest shop has a scant offering of seemingly random necklaces and rings, but she said business has picked up a bit with customers coming to buy gifts for family, but added woefully “there aren’t a lot of people these days.”

Food prices surged 400 percent in December 2020 year on year and citizens have had to make cuts to their usual meals and find alternative less costly ingredients.

Despite the harrowing economic depression as well as the impact of 15 months of the coronavirus pandemic, the atmosphere in Bab al-Saray Square in Sidon’s old souk Tuesday night was jovial. The shops were busy with families buying new clothes for holiday, or sampling the plethora of Arabic sweets.

Amira, 25, who preferred not to give her surname, will celebrate Eid at home in Sidon, but she revealed that activities will be dampened this year by the economic crisis.

“We used to have lahm bi ajeen but this year probably falafel, and less sweets– a totally different menu,” she told The Daily Star.

The price of lamb, once a staple household item, has been victim to huge price rises. A kilo of meat now costs LL90,000 on average in Sidon’s butcheries, unattainable for much of Lebanon’s population, of which over half sits below the poverty line. Before the crisis it sat at around LL40,000 a kilo.

A family of four could expect to consume a kilo of meat each week – putting the breadwinner out of pocket by LL360,000 a month.

Since the Lebanese pound began to devalue in October 2019, locals have seen their incomes slashed by 90 percent of their worth against the dollar. In March this year, the pound dropped to an historic low trading for LL15,000 to the dollar on the black market.

Since then, it has hovered around LL12,000 to the dollar, fueling uncertainty and panic buying across the country. And for those stuck on Lebanon’s minimum wage of LL675,000 a month – around $56 at the current street value and $450 precrisis – a weekly kilo of meat now constitutes 55 percent of the wage.

In addition, for a second year in a row, celebrations will be dampened by the coronavirus as the government is set to impose a strict lockdown and curfew across the country for three days, to deter social gatherings and risk spreading the infectious disease.

Traditional Arabic sweets, like baklawa, a thin flaked pastry filled with nuts, are a classic food eaten during the festivities.

However, much like the price of meat, the food is now unattainable to many since the cost of ingredients skyrocketed with the country’s inflation.

One sweet shop owner down a narrow side street of Sidon’s souk told The Daily Star with a sigh that his baklawa now cost LL70,000 per kilo.

Back in Beirut’s Muslim neighborhoods gearing up for the end of Ramadan, the story was not dissimilar.

Walid’s 45-year-old baklawa shop in Mar Elias has been feeling the pinch of the Lebanon’s worst economic crisis since the 1975-1990 Civil War.

He told The Daily Star fewer customers had been coming through the door this Ramadan. Prices are even steeper in the capital, and for baklawa it was an eye watering LL85,000 a kilo.

As he spoke, one lady inquired over prices and left empty-handed – leaving Walid to simply shrug his shoulders and raise his hands in the air.