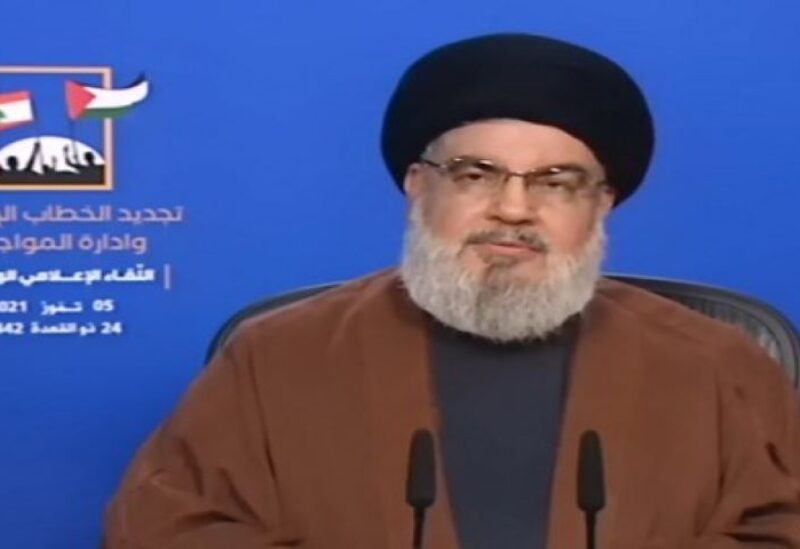 Hezbollah’s Secretary General, Hassan Nasrallah, said Monday that the upcoming few days should be decisive regarding the long-awaited formation of the new government.

Speaking at the opening of the National Media Gathering conference “Palestine Emerges Victorious” at As-Saha Restaurant, Nasrallah indicated that the imminent meetings would draw a “clear governmental course.”

According to the Hezbollah leader, the current governmental dilemma reflects a regime crisis in Lebanon, adding that there is also a political crisis, rampant corruption, limitless thefts and monopolization.

However, he accused the U.S. administration of standing behind the current crisis, and slammed it for “besieging” the Lebanese people and preventing help from the world.

“The purpose of the U.S. blockade is to provoke the Lebanese people against the Resistance,” he said.

“What (people) are suffering is caused by the U.S. policy and embassy in Lebanon,” he stressed.

Nasrallah indicated that major companies seeking to invest in Lebanon had been turned down out of fear of U.S. sanctions.

Pertaining to the Beirut port blast case, Nasrallah voiced rejection of any political exploitation of the ongoing investigations.

However, he indicated that justice was still far-off and that the truth was still veiled.

On a separate note, Nasrallah highlighted the importance of media and its rhetoric in the confrontation with the enemy. “The development of media confrontation is a must, just like the military confrontation,” he said.

“Media rhetoric displays and conveys what is happening on the ground,” he added, stressing its role in the face of Israeli occupation and US hegemony.

“In this battle, confrontation cannot be divided,” he continued.

“The US hegemony has put all resources in the region in the service of the Israeli enemy’s interest,” he indicated.

“The media rhetoric of the Axis of Resistance is based on the Palestinian people’s right to their land and Syria’s to its Golan,” said Nasrallah.

“The standards of righteousness are found in the Palestinian Cause as well as in the media rhetoric of the Axis of Resistance,” he stressed.

“The media of the Resistance relies on the victory of the Axis and its imposing the rules of engagement on the Israelis and the U.S.,” he went on to say.

“We know the weaknesses of the enemy, which we can use to triumph against it,” he underscored.

Moreover, Nasrallah maintained that the Israelis believed the media of the Resistance more than they trusted their leaders.

“When we speak about wiping the occupation entity out of existence, it is not only words,” he stressed. “Our goals are not exaggerated, and this is one of our strength points.”

Nasrallah continued: “Not only did social media platforms cover news of victory but also contributed to the accomplishment of triumph.”

He also indicated that the potentials of the axis of Resistance had significantly grown. “For the past decades, the media of resistance has made substantial achievements upon which further development must be based.”

He also reminded that the enemy had banned satellite channels and websites because of the impact they made.

Furthermore, he called for a media plan to face misleading and fabricated news, especially pertaining to the Palestinian Cause and al-Quds.

“We must develop our rhetoric in accordance with the changes and threats in the region,” he underlined, highlighting the necessity to shape a new public opinion on the new regional equation.

He also considered that those devising plots in the region were seeking to preoccupy people with their daily bread. “The key purpose is to keep us unbothered with the ongoing conspiracies, especially in Palestine.”