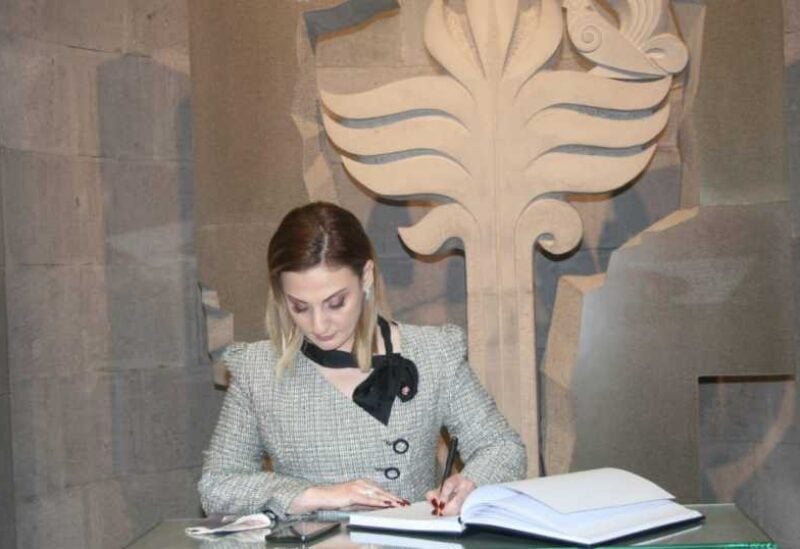 Lebanon’s caretaker Youth and Sports Minister, Vartiné Ohanian, represented President Michel Aoun during her visit on Saturday to the “Tsitsernakaberd Memorial Park” in the Armenian capital, Yerevan, marking the 106th commemoration of the Armenian Genocide, the National News Agency reported.

Ohanian who was accompanied during her visit by Armenian Ambassador to Lebanon, Vahagn Atabekyan, and Lebanon’s Ambassador to Armenia, Maya Dagher, laid a floral wreath in honor of the fallen martyrs.

Speaking on the President’s behalf, Ohanian said: “With utmost respect and reverence for the occasion, His Excellency the President of the Lebanese Republic General Michel Aoun entrusted me with his representation in the commemoration of the Armenian Genocide marked by the Armenian Republic, in order to keep the flame of truth throbbing in consciences.”

“The martyrs of the Armenian genocide remain in our consciences and alive in our present life and in our future. They proclaim that the Lord is the ‘God of Peace’ and not of tyranny, colonialism and violence. With them, we refuse to surrender to the death sentence….And here they are, after more than a century, renewing the face of the earth.”

“There is more than one common denominator between the Armenian and Lebanese peoples, especially in torment, sacrifice and suffering,” Ohanian said.

“The Lebanese-Armenian ties have strengthened on the human level in particular, when hundreds of thousands of Armenians settled on Lebanon’s territory, as a result of the massacres that targeted the Armenian people at the beginning of the last century,” she noted, pointing out that Armenians “have become a key component of our nation, effectively contributing to its political life and its economic, social and cultural progress.”

Following her visit to the Memorial Park, Ohanian toured the Genocide Museum where she wrote a word in honor of the fallen martyrs in the Golden Register, and then visited Yerevan Municipality to attend a photo exhibition organized by the Ministry of Foreign Affairs.