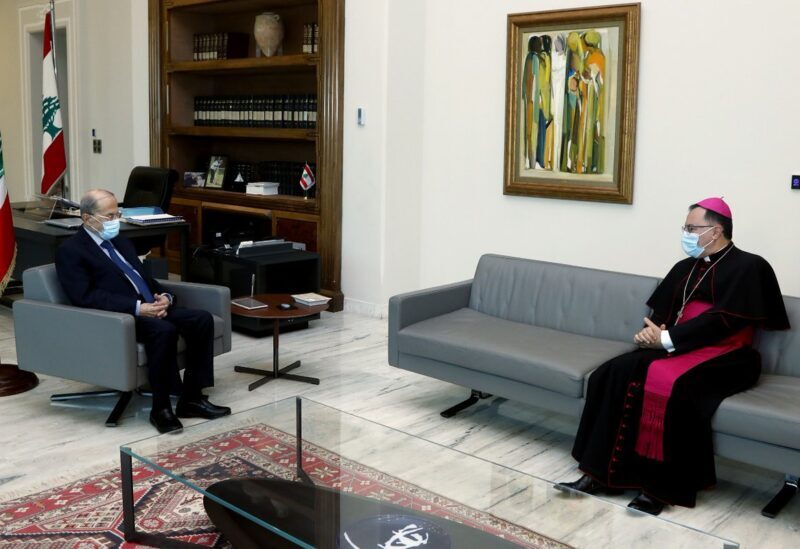 Monsignor Joseph Spitri, the Papal Ambassador to Lebanon, expressed Pope Francis’ greetings and his hopes for the formation of a new cabinet in Lebanon to President of the Republic General Michel Aoun. “Real remedies to what Lebanon is suffering from cannot be reached without a government,” Ambassador Spitri said.

The Papal Ambassador also pointed out that “The day of the meeting in Rome began with the acknowledgment of mistakes, and what could have been done better, by churches and Christian spiritual leaders”. “We also wished that politicians, all without exception, would make a reconsideration of their own, so that not all remain sticking to their position, because only through dialogue we can find solutions” Spitri added.

After the meeting, Monsignor Spitri made the following statement:

“I came to visit His Excellency the President of the Republic, and conveyed to him the greetings of His Holiness Pope Francis. I also came to inform the President about the “Day of Meditation and Prayer for Lebanon” which the Pope called for in the Vatican.

His Holiness dedicated all the day for Lebanon with all his heart, and he expressing his wishes to form a new government. This is what we fervently wish for. We do not interfere in political matters, but it is clear that without the a government, no real solutions can be reached for Lebanon’s suffering.

This was the content of my conversation with His Excellency the President. In addition to the aid that the Holy See and international humanitarian organizations send to Lebanon. We particularly help schools and hospitals, in addition to citizens living in a state of need. You know what Caritas is doing in this regard, in addition to other institutions.

I participated during my stay in Rome with international meetings to help Christians in Lebanon and the countries of the Middle East, through Catholic institutions that renewed their commitment to help Iraq, Jordan, Lebanon and Syria, especially here under these very difficult circumstances.

Certainly, it is not possible to always live on aid that comes from abroad. Therefore, we hope that a political solution will be reached as soon as possible to prepare for the parliamentary and administrative elections next year.

At the end of Pope Francis’ speech he said frankly that the Christian spiritual leaders have also admitted to their mistakes, if that can be said. Pope Francis asked forgiveness for the missed opportunities, and for what could have been done and was not done, he asked for God’s help in order to see more clearly how Lebanon could be helped.

The Pope also mentioned the importance of the role of women, children and youth, as there is an essential role for our youth, which is required by all Lebanese women and men without exception, because the Rome meeting was not devoted only to discuss the situation of Christians in Lebanon, but also to discuss Lebanon’s problems and speak for the benefit of all Lebanese women and men. We hope that Lebanon will always be able to present this essential image of freedom and coexistence in order to reach the necessary solutions”.

In response to a question about how President Aoun read Pope Francis’ speech in which he stated that politicians preserve their own interests, Ambassador Spitri said: “You have to ask this question to his Excellency, and I do not have to answer it.  The day of the prayer and reflection in Rome began with an admission of mistakes, and what could have been done better, by churches and Christian spiritual leaders. So that no one would stick to his position, because only through dialogue we can reach solutions”.