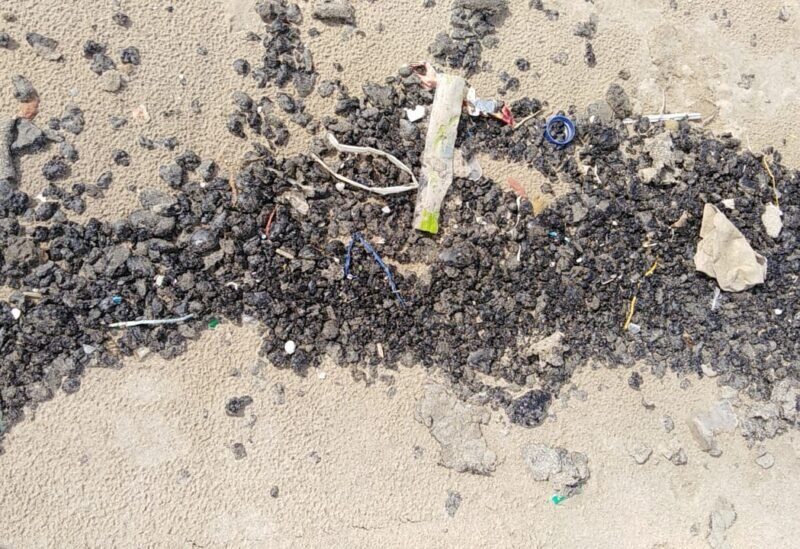 A few days ago, strong winds and unprecedented high waves caused the leakage of tar from an Israeli ship off the Lebanese southern coast, threatening an environmental disaster, the effects of which would extend for decades.

Julien Jreissati, program manager at Greenpeace Middle East and North Africa, urged on Monday Lebanon’s Ministry of Environment to take immediate action to assess the extent of the risk of the oil spill in the Mediterranean that has reached the southern coast.

Earlier, caretaker Lebanese Prime Minister, Hassan Diab, followed up on reports that oil spills from an Israeli ship have reached the Lebanese shores in the south.

He tasked Minister of Defense, Zeina Akar, Minister of Environment, Demianos Kattar, and the National Council for Scientific Research, with notifying UNIFIL forces about the situation, in addition to drawing up an official report in this regard and dealing with this leak and with its damage.

The Israeli authorities had also warned residents against approaching the shores of the Mediterranean so as to avoid the major pollution caused by the leakage of tar from one of the ships, as thousands of workers and volunteers went on to clean the beaches.

In a joint statement, the Israeli ministries of interior, environmental protection and health urged the public not to use “beaches for bathing, sports and entertainment until further notice,” adding “exposure to tar can threaten public health.”

Strong winds and high waves hit Israeli ships loaded with tar, causing the leakage of this dark liquid into the sea and polluting 160-kilometer-long coastlines starting from Ras Naqoura in southern Lebanon to Ashkelon in the northern Gaza Strip.

Many marine species have started to die due to the oil spill which occurred while tens to hundreds of tons were unloaded from a ship, according to estimates by the Israeli Ministry of Environmental Protection.

Lebanese environmental activists warned of the scale of this disaster, cautioning that its effects could extend for decades, after the sticky black liquids that appeared on Israeli shores spread to a nature reserve in Tyre, southern Lebanon.

Photos taken on the beach of Tyre city depicted the oil spill’s crystal clear effects on the water and on some sea turtles this southern coast is famous for.

This comes as Israel is investigating reports of a ship that crossed on February 11 about 50 km off its coast as the potential source of the oil spill.