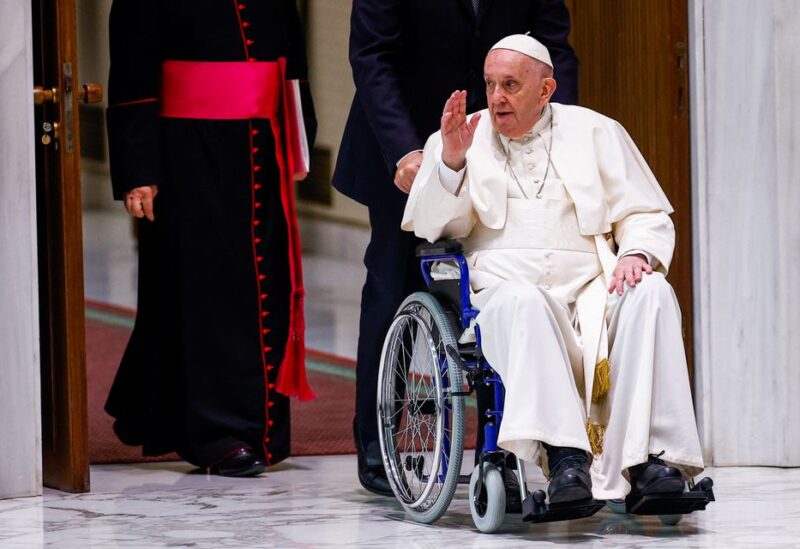 Pope Francis arrives on a wheelchair to meet with participants in the plenary assembly of the International Union of Superiors General (IUSG) at the Vatican, May 5, 2022. REUTERS/Guglielmo Mangiapane

Pope Francis’ planned trip to Lebanon next month has been postponed due to the 85-year-old pontiff’s recent difficulty walking, according to insiders.

In recent weeks, the pope has experienced a flare-up of discomfort in his right knee, as well as a long-standing problem of sciatica, which causes leg agony.

The June 12-13 trip had been announced by the Lebanese government. The Vatican never officially announced the trip but pope has referred to plans relating to it in recent interviews.

The two sources, who spoke on condition of anonymity because they were not authorised to discuss such matters, said the pope’s health was the main concern.

A plan for the pope to go from Lebanon to Jerusalem on June 14 to meet Kirill, the patriarch of the Russian Orthodox Church, had already been cancelled because of the war in Ukraine.

The Lebanon trip will likely take place after the summer, one source said.

Francis is due to make two trips in July, one to South Sudan and the Democratic Republic of Congo and the other to Canada.

Last Thursday, he used a wheelchair in public for the first time and has used one since during private and public audiences.

He told an Italian newspaper last week that he was receiving injections to help movement of his joints.