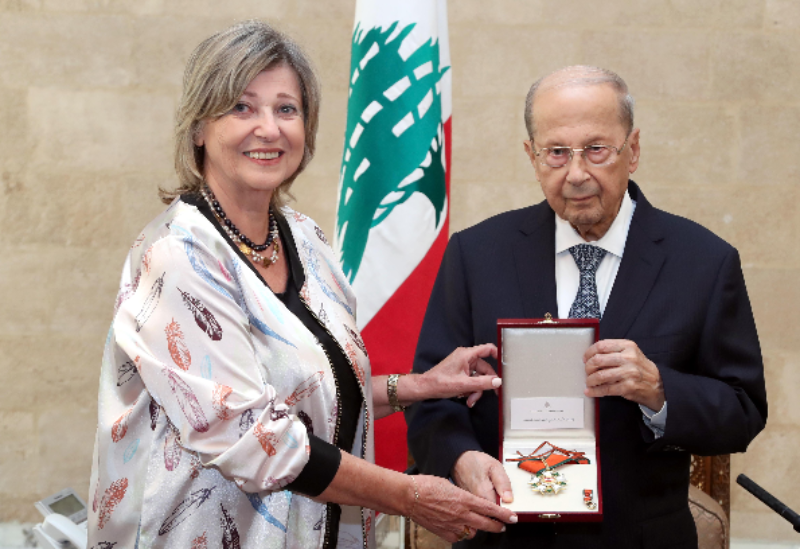 In appreciation of the late Professor Pascal Azzam’s achievements to education, science, and patriotism, President Michel Aoun held a ceremony this afternoon at the Presidential Palace. He conferred the National Cedar Order, Commander Rank, on him and presented it to his widow, Mrs. Regina Azzam.

At the beginning the Director General of Protocol and Public Relations at the Presidency of the Republic, Dr. Nabil Shedid, delivered a speech in which he explained the reasons for awarding the medal.

Dr. Shedid said “Dear guests, we meet today at the invitation of His Excellency, President of the Republic, General Michel Aoun, to honor the late Professor Pascal Azzam, this man who gathered in person, many qualities that distinguished him throughout his career, which ended on January 7, 2019, after 72 years of dedication, as an ambitious student, professor, and role model. The Libraries of the Lebanese University, Saint Joseph University, the University of the Holy Spirit in Kaslik, the University of Sagesse, and other Lebanese educational edifices in which he planted his knowledge, culture and experience since he graduated from Paris Dauphine University and then from Saint Joseph University”.

“However, the other side of Pascal Azzam is the face he loves most. He is the fighter who believed in a cause and a leader. He was an authentic Lebanese resistance fighter who did not care about dangers. He devoted a great period of his life to defending Lebanon’s sovereignty and independence, inspired by the history of this country, which is rich in heroism. Pascal Azzam believed in change and reform, the path that General Michel Aoun launched and continued as President of the Republic, because Pascal rightly saw in it a salvation for Lebanon and a salvation for its people, so he did not hesitate and did not back down. Many who appreciated his gifts and imitated his approach, always remember those difficult moments they lived with in his home, which became a meeting place for them despite the danger that surrounded their meetings after the occupier’s backers expelled the leader of the march to France. The groups of militants from the “Old Guard” continued this march, until the leader returned from exile, and Pascal was among the founders of the Free Patriotic Movement, he continued to work silently, with sincerity and loyalty until he lost sight of the hope of resurrection” Dr. Shedid said.

Dr. Shedid concluded “Dear audience, in honor of Pascal Azzam, the university professor, the fighter, the resistance fighter and the lover of the environment and man, and he who founded the “Lebanon Green Club” association for this purpose, His Excellency the President of the Republic, General Michel Aoun, decided to award the deceased, after his death, the National Cedar Medal, Commander Rank, in appreciation of his sacrifices for his country and people. The memory of Pascal Azzam will live on in the hearts of those who knew him and those who did not know him, because someone like him is known by his actions and by these actions he is remembered”.

After that, the son of the deceased, Elias Pascal Azzam, delivered the following speech:

“The family of the late Dr. Pascal Azzam and his friends thank your Excellency for giving him the National Cedar Medal, in honor of his struggle for which he devoted his life. He believed in your Excellency, since the first moment of the outbreak of war in 1975, until the end, he always described you as the first resistance fighter who carried the Lebanese cause on his shoulders.

Pascal was solid in his faith and political thought. He was a university educator, a visionary and strategic mind for the Lebanese youth. This honor comes today to be a role model for the new generation in facing life’s difficulties and challenges. It is represented by the multiplicity of resistances that Pascal practiced and which he always advocated: The resistance with weapons, and he was responsible for the barracks of the liberation of Lebanon, and then a member of the organization’s leadership council, to the educational resistance, where he was one of the founders of the Faculty of Business Administration – the second branch at the Lebanese University, to the popular resistance through the “Central Office for National Coordination” where he was a member founding it, leading to educational and environmental resistance through its call for “Green Lebanon” since 1995, to political resistance among the Free Patriotic Movement of which he was a founding member, and finally to disease resistance with determination, humility and belief in the resurrection.

We ask God to grant your Excellency health and a long life so that you may remain as tall as a mountain facing the difficulties and storms that strike Lebanon.

The celebration concluded with a word by President Aoun, in which he expressed his appreciation for the late Pascal Azzam in the various fields in which he emerged as a humanitarian, educational, and militant, in defense of Lebanon, in addition to his distinguished personality, which was characterized by kindness, humility and kindness until he became a model.

At the end of the ceremony, a souvenir photo was taken.