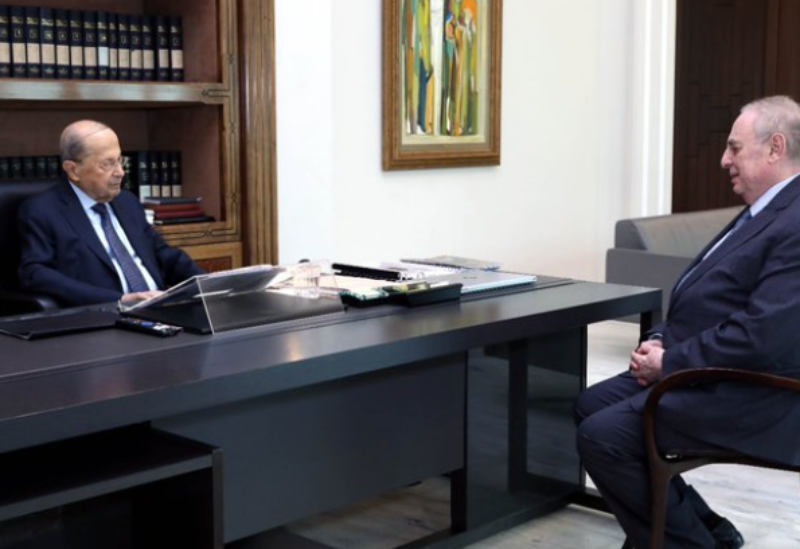 General Michel Aoun, President of the Republic, reaffirmed his support for Lebanon’s pharmaceutical corps and condemned the murder of pharmacist Leila Rizk in the town of Al-Mrouj in Metn.

The President phone called the head of the Syndicate of Pharmacists in Lebanon, Dr. Joe Salloum, , and expressed his condemnation of the crime, stressing that the instructions were given to the security services to pursue the perpetrators of the crime, arrest them and refer them to the judiciary to impose the most severe penalties.

President Aoun received the Chairman of the Economy, Trade, Industry and Planning Committee, MP Farid Al-Boustany, today at Baabda Palace and deliberated with him current political developments, electoral developments and the work of parliamentary committees.

The needs of the Shouf region and the stages of work in Deir El Qamar Governmental Hospital, in addition to securing the conditions for its completion as soon as possible were also tackled.

MP Boustany also affirmed that President Aoun pays special attention to Deir Al-Qamar Governmental Hospital in view of the role it can play in the future in the field of health care for the people of the region and surroundings.

Abi Nasr said that he discussed the issue of the deliberate delay in issuing the regulatory decrees for the law establishing the Kesrouan Governorate – Jbeil, despite the passage of years since its approval in the Parliament, and the series of successive reviews with the successive Ministers of Interior and Municipalities since the issuance of the law that was approved against the background of empowering the people of the region Kesrouan and Jbeil from pursuing their transactions in the official departments without the need to move to the headquarters of the Mount Lebanon Governorate in Baabda, bearing in mind that this matter has become very urgent after the economic and financial distress that Lebanon is going through and the high prices of transportation and other services.

Moreover, Abi Nasr confirmed that President Aoun will make the necessary contacts in order to expedite the issuance of the organizational decrees in the Ministry of Interior.

President Aoun received the new patron of the royal Greek Catholic Diocese of Ferzol, Zahle and Bekaa, Archbishop Ibrahim Ibrahim, and his secretary, Father Charbel Rashid, in the presence of the Director General of the Ministry of Agriculture, Eng. Louis Lahoud.

Archbishop Ibrahim thanked the President for his participation in the celebration of his accession to the diocese by sending a representative.

Administrative appointments and the rights of the Melkite Roman Catholic community were also tackled in the meeting.

Ambassador Kabbara will leave Beirut to return to his workplace in Saudi Arabia, after the return of the Saudi Ambassador, Walid Bukhari, to Beirut.

Ambassador Kabbara stressed that the President’s directives have always been to ensure the best relations with Lebanon and other brotherly countries in general, and the Gulf states in particular, especially the Kingdom of Saudi Arabia.