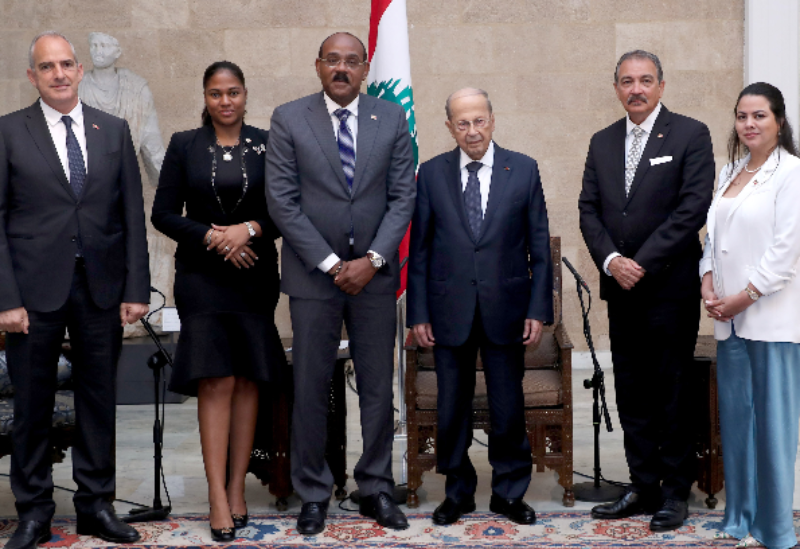 Lebanon appreciates the strengthening of bilateral cooperation between the two nations, particularly in the educational, cultural, and tourism spheres, as well as the desire of many Lebanese to invest in Antigua and Barbuda, according to President Aoun.

The President also affirmed his support for the success of the student exchange program, noting the role played by the Lebanese community in Antigua and Barbuda, especially with the presence of a group of Lebanese students who are pursuing their studies in the universities of the capital, St. John’s.

For his part, PM Brown expressed his happiness for visiting Lebanon, the first of its kind since the establishment of diplomatic relations between the two countries in 2017, and considered that the appointment of an ambassador residing in Beirut reflects the importance the government attaches to strengthening cooperation between the two countries.

Premier Brown pointed out that there are about 2,000 Lebanese citizens in Antigua and Barbuda, who play an important role in the economy, education and tourism.

“We have a desire to strengthen relations between the two countries and to find new areas for bilateral cooperation and in international forums and to increase mutual investments, so it is necessary to put in place investment frameworks and agreements to protect it, including double taxation” PM Brown said.

Moreover, Premier Brown considered that “Cooperation in the educational field is important because the educational level in universities in Antigua and Barbuda is high, and there are Lebanese students who have graduated from them or who are continuing their university education so far”.

Finally, PM Brown thanked the President for his support for his desire to activate relations, to hold meetings with specialized Lebanese ministers, and to exchange visits.

On the Lebanese side: Former Minister, Salim Jreissati, General Director of the Presidency of the Republic, Dr. Antoine Choucair, and advisers Rafic Chelala and Osama Khashab attended.—Presidency Press Office