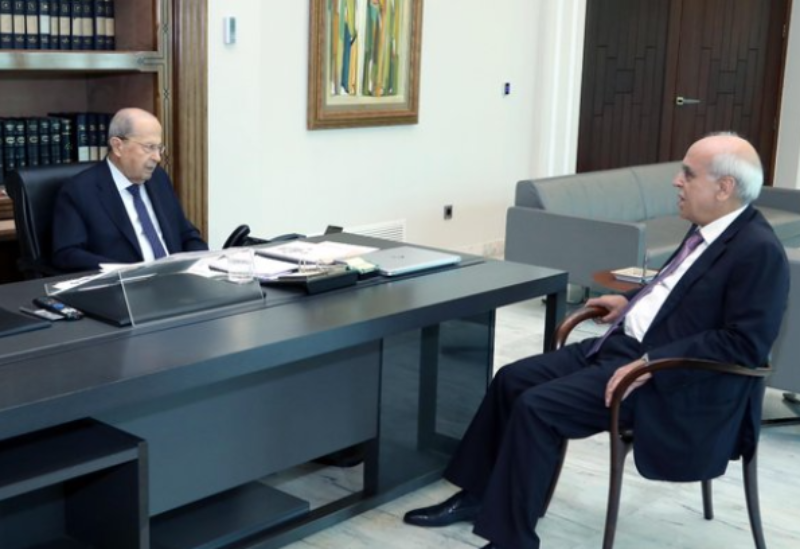 General Michel Aoun, President of the Republic, followed up today on ongoing negotiations to create a new government and demarcate the country’s southern maritime frontiers.

The President received MP, Mr. Mohamed Yehya, and deliberated with him current political and governmental developments.

After the meeting, MP Yehya indicated that the government situation and the on-going contacts in this regard between the President of the Republic and the designated Premier were discussed, in addition to the necessity of achieving this matter for the benefit of the country and its people.

“In this context, I stressed the importance of representing the Akkar region in the upcoming government, and I felt His Excellency’s interest in Akkar and its people and the need to take care of them and their needs that we discussed during the meeting” MP Yehya said.

“We hope that the process of forming a government will be easy and take into account the desire of the people of Akkar to be represented in the line-up” MP Yehya concluded.

After the meeting, Rahme said “My visit today to His Excellency the President focused on three issues of concern to the Lebanese. The first and most important issue is the continued decline in the economic situation, the rise in prices, the lack of control, the fight against monopoly and smuggling, which mainly affects social conditions and increases the suffering of citizens”.

“The possibility of addressing the continuous deterioration is still possible if everyone is convinced of the need to adopt measures, even temporary and gradual, pending the approval of the recovery plan and the rejuvenation of the country after adopting the necessary reform laws, not only for the sake of the International Monetary Fund, but also for Lebanon’s need for these laws at this delicate stage in Lebanon’s history” Rahme continued.

“Talking about the importance of quick treatments led me to the second issue, which is the formation of the government and the need to achieve this matter as soon as possible because the country cannot bear to remain without a full-fledged government, especially in light of the fears that are increasing day by day regarding the failure of the election of a new president for the country within the constitutional deadline. I felt His Excellency’s desire to form a new government in agreement with the Premier-designate and in accordance with the constitutional rules and national partnership, and the discussion is open and continuous between His Excellency the President and PM Mikati. Deliberations will continue during the next few hours, hoping to reach an understanding, knowing that the country can no longer afford the luxury of waiting and arguments that are useless because we are not in a normal circumstance” Rahme added.

Rahme also revealed that the third topic he discussed with President Aoun was what the contacts led to regarding the demarcation of the southern maritime borders.

“I understood from His Excellency the President that this national file, par excellence, is on the right path, which will preserve Lebanon’s rights to its waters and wealth, and that all data indicates that reaching these rights will not take long and that the American mediator, Amos Hochstein, is continuing his contacts with the Israeli side, according to what was agreed upon during his visit, on the 1st of last August” Rahme pointed out.

Then, Rahme concluded indicating that “What is important in this regard is for the Lebanese position to remain united because it is the basis of Lebanon’s strength and to avoid bids that negatively affect such a sensitive issue related to national sovereignty and dignity”.