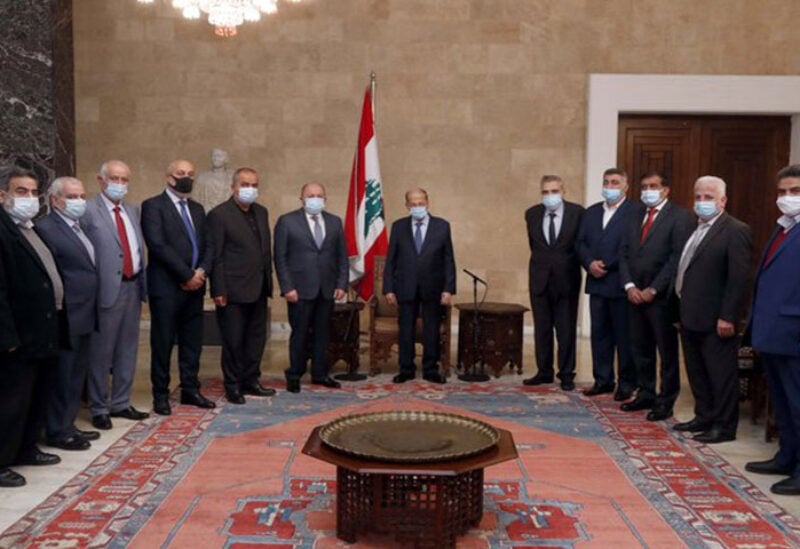 Meeting in the Presidential Palace

President of the Republic, General Michel Aoun, stressed the need to form a government as soon as possible, which is capable of dealing with the difficult economic and living conditions which the Lebanese suffer from.

The President also emphasized that the government is formed according to specific criteria which respect the principles of equal distribution, which enables those with powers to exercise their powers, and not by adopting the principle of “Monopoly in the government formation process”.

Stances of President Aoun came while receiving the head of the General Labor Union, Bechara Asmar, today at Baabda Palace.

Asmar, who was accompanied by a delegation from the Union, discussed current economic conditions and the issue of lifting subsidies on basic goods, with the President.

At the beginning of the meeting, Al-Asmar said “In light of the difficult living and economic conditions, a government must be formed. This government should consist of competent, honest people who are well-known for their national, economic and social achievements, so that this government achieves the desired advancement, in this bad economic situation which Lebanon is witnessing”.

“What matters to us is to find the solutions to peoples’ problems and concerns. People are suffering catastrophic conditions which we are all going through, in light of the insane rise in the US Dollar rate, in parallel with the decline in the Lebanese Lira purchase power. This leads to monopoly in foodstuff, in the absence of control” Al-Asmar continued.

Then, Asmar emphasized that “The state is the only guarantee for our Union. Therefore there is no resurrection for this state except by fighting corruption and through forensic audit, so that we can know where the money of the people was spent, and how it disappeared from banks. The actions taken by the Central Bank led to the loss of citizens’ deposited funds. We should rely on forensic audit, which must include various departments and ministries, thus retaining the right path of the state”.

In addition, Asmar pointed to the possibility of resorting to activating the work of the caretaker government stressing the urgent need to form a government. “We feel the complete absence of the executive authority, except for few ministries who carry out their duties” he said.

“As General Labor Union, we are with rationalizing subsidies. But in return, we are in favor of setting up an alternative project which provides specific rations, or a card which covers a large portion of the Lebanese population, which should be around 70% who have fallen below the line of poverty. We look forward for a state with the rule of law and judiciary, the state of welfare and regulatory institutions” Asmar concluded.

For his part, the President praised what Asmar stated, stressing that what he said was “More than correct”. The President indicated that the line of poverty had led to the disappearance of the so-called middle class, and that the concerns of the Lebanese, especially living concerns have increased.

“The legacy of consisting of accumulations is very heavy. We all know that it consists of hundreds of billions, in addition to tragedies which have directly affected Lebanon, starting from the accumulation of debts, to the Syrian war, to the Beirut Port explosion, up to the outbreak of the global Corona pandemic, with the lack of possibility of compensation, and holding the economy till conditions improve” President Aoun said.

Moreover, the President discussed the difficulties of setting quick solutions to various problems, “Especially as this issue requires capabilities which we lack, namely financial capabilities”. President Aoun also revealed that “Work is currently underway to implement a plan to rationalize subsidies, where there will be a ration card for those who suffer difficult economic and living conditions”.

Finally, President Aoun hoped that a new government would be formed as soon as possible and asserted “The necessity that the PM-Designate be convinced of the difficulty of reaching a solution in this field, by resorting to one-person authorization. There are several criteria on the basis of which a government is formed, especially regarding the distribution of balance. This isn’t done through a one-man monopoly in the formation process. We should find solutions in order to restore the balance to what it was, where the people with power are enabled to exercise their powers”.