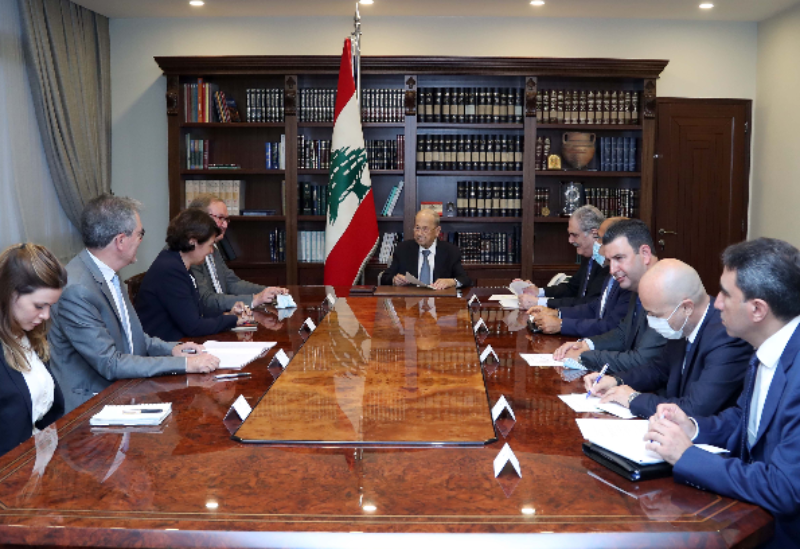 General Michel Aoun, President of the Republic, reaffirmed on Thursday his commitment to continuing the necessary reform process to kick-start Lebanon’s financial and economic recovery. He expressed hope that the new Parliament would approve the necessary reform projects, including the 2022 budget, amendments to the Capital Control and Banking Secrecy laws, as well as other draft laws that had been referred to it for study, in order to accomplish this goal.

President Aoun also emphasized the completion of negotiations with the International Monetary Fund “Because it is the main entry point for the beginning of recovery and the restoration of confidence in the Lebanese economy in Lebanon, despite the heavy responsibilities entrusted, which was finally translated through the French-Saudi support for the Lebanese people through a series of development programs and humanitarian projects, in addition to France providing Lebanon with a gift of 50 passenger buses to encourage joint transportation”.

President Aoun praised France’s efforts and contribution in helping to re-establish relations between Lebanon and the Gulf states, and expressed his hope that a government would soon be formed that would carry out its duties to the fullest, especially in terms of continuing the required reforms, the most important of which are: working on unifying the exchange rate, and following up on the forensic audit law that was launched from the Central Bank, the fair sharing of losses, and work to ensure food security, in addition to putting a plan to advance the electricity sector into practice, and reconsidering the tariff, especially for the affluent parties and not by adding burdens on the poor classes.

The President noted that all this would restore confidence in Lebanon and stimulate the restoration of hope for its future.

For his part, Ambassador Duquesne had conveyed to President Aoun the greetings of French President Macron, and his affirmation of the continued French interest in Lebanon and its desire to help it get out of the crisis it is going through at various levels.

Duquesne also stressed the importance of signing the final agreement with the International Monetary Fund, before the expiry of the term of President Aoun, pointing out that this achievement requires parliament to approve reform laws, most notably: the 2022 budget bill, amending the banking secrecy law, and the Capital Control law whose texts are in the House of Representatives, and speeding up the completion of the bank restructuring bill.

Moreover, Ambassador Duquesne thanked the President for his support of the reform process and the reform program of the International Monetary Fund, calling for looking at this program as a basis for restoring confidence in Lebanon, stimulating the economy and expanding its size, because this restores the confidence of international institutions in the Lebanese economy.

On the other hand, Ambassador Duquesne stressed that France will work to encourage donor countries and international institutions to contribute to supporting Lebanon in order to improve infrastructure, which increases job opportunities and limits the growth of immigration, calling to look to the future with confidence to stimulate the economy.

Duquesne expressed his appreciation for what President Aoun announced that he supports reform work and wants to reach positive results.

On the Lebanese side, former minister Salim Jreissati, General Director of the Presidency of the Republic Dr. Antoine Choucair, and advisors: Rafic Haddad, Charbel Kordahi, and Osama Khachab participated in the meeting.