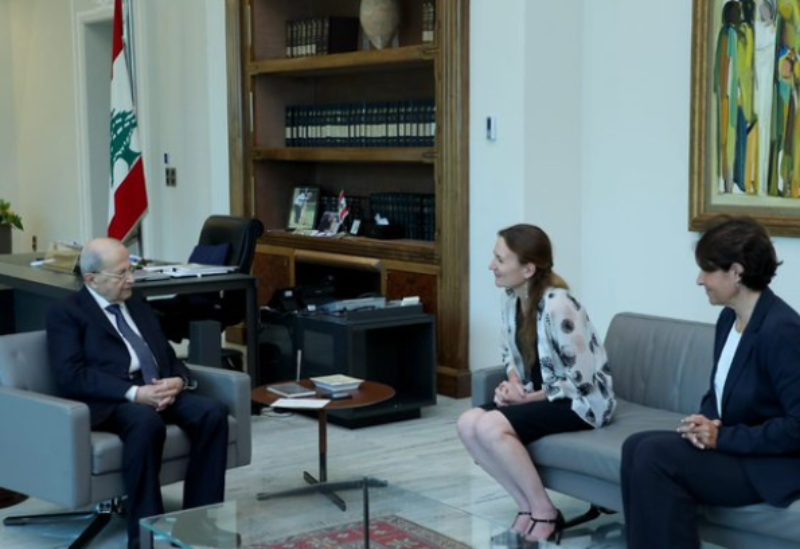 President of the Republic, General Michel Aoun, met the Director of Africa and the Middle East at the French Ministry of Europe and Foreign Affairs, Ms. ANNA Gueguen, at Baabda Palace, in the presence of the French Ambassador in Beirut, Ms. Anne Grillo.

President Aoun told Ms. Gueguen that he hopes that the presidential elections will take place within the specified constitutional deadline so that he could hand over the new president at the beginning of his term on the first of next November.

The President also considered that the election of the new president is the responsibility of the MPswho must determine their options in this regard, and affirmed that he is keen to achieve the reforms that Lebanon promised the International Monetary Fund to achieve, especially reconsidering the restructuring of Lebanese banks and “Capital Control” and amending the banking secrecy law, after Parliament approved the budget law for the year 2022.

On the other hand, the President indicated that contacts are on-going to form a new government after overcoming the obstacles that have so far prevented its formation.

Moreover, President Aoun clarified that on the subject of indirect negotiations to demarcate the southern maritime borders, Lebanon will determine its position on the content of the presentation presented by the American mediator, Amos Hochstein, which included proposals under study today, in consultation with the Speaker of Parliament and the Prime Minister, and in light of the observations of the technical committee formed for this purpose.

In this context, the President indicated that he has been keen over the past months to guarantee Lebanon’s rights to its waters and to provide the appropriate conditions to start exploration operations in the oil and gas fields specified in the exclusive economic zone in which the French company “Total” is supposed to start, stressing that there will be no partnership with the Israeli side.

Moreover, President Aoun expressed his hope that the start of oil exploration in the southern water fields would be a positive start that would help the Lebanese economy to rise again after the decline that occurred during the past years.

Finally, President Aoun stressed that forensic audit in Central Bank accounts is continuing, and it is part of the anti-corruption process that started with the beginning of the era six years ago and stumbled several times due to the pressures exerted by those involved in corruption operations at all levels.

For her part, Mrs. GUEGUEN assured President Aoun of France’s keenness to continue to help Lebanon in various fields and that attention to Lebanese affairs is a priority of the French government, stressing the importance of holding the presidential elections on their constitutional date in order to prevent any vacuum at the presidential level, and to implement reforms and agreement with the International Monetary Fund.

Mrs. GUEGUEN also considered that reaching an agreement on the issue of the southern maritime demarcation is a message of confidence to the international community in Lebanon, which will have positive effects on Lebanese national economy.