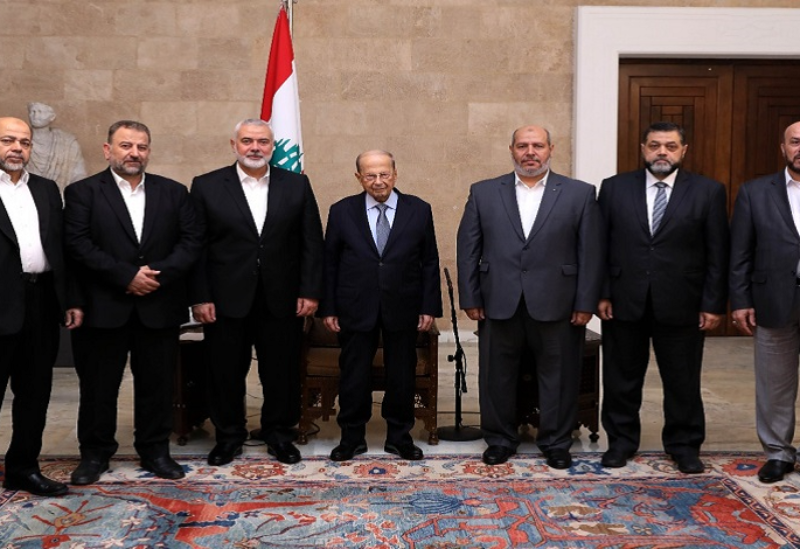 General Michel Aoun, President of the Republic, reaffirmed Lebanon’s position on the Palestinian cause. He did this by endorsing the Palestinian people’s right to establish an independent state on all of their national territory, with Jerusalem as its capital, and by dedicating the right of return for Palestinian refugees to their homeland. The President also took into account the fact that Palestinian resistance to occupation is not terrorism.
President Aoun stressed the importance of preserving Jerusalem, where the three religions meet: Christianity, Islam and Judaism, considering that no one can imagine Jerusalem without the Church of the Holy Sepulcher and other holy places.

At the beginning of the meeting, Dr. Haniyeh expressed the Palestinian people’s appreciation for the support they receive in Lebanon, as president and people, despite the difficult circumstances they are going through.

Then, President Aoun was briefed on the latest developments in Palestine and what the Israeli occupation is doing in Jerusalem, Gaza and the West Bank, especially the settlement projects that are being implemented in addition to the permanent exposure to places of worship and the storming of Al-Aqsa Mosque and other aggressive practices.

After the meeting, Dr. Haniyeh made the following statement:

“I had the honor to meet His Excellency the President, and the meeting was an occasion in which I presented him with the latest developments that the Palestinian cause is going through.

On our part, we focused on the fierce battle taking place in Jerusalem between the Zionist occupation and our people stationed there. We explained what is happening in Jerusalem, whether in the context of Judaization, continuing settlement, demolishing homes, or deporting and restricting our Jerusalemites to push them out of the holy city, as well as the plans for the temporal and spatial division of Al-Aqsa Mosque and the attack that took place on the Church of the Holy Sepulcher on Holy Saturday and Easter Sunday.

We assured that the Israeli occupation does not differentiate between a Muslim and a Christian on the land of Palestine, especially in Jerusalem.

We were exposed to the unjust siege that Gaza has been experiencing for 15 years, with the aim of breaking the will of the Palestinian people and subjugating the resistance in Palestine and Gaza to the will of the occupation, an extension of what our people live in the camps of Lebanon, 74 years after the Nakba and the asylum.

We reject resettlement, the alternative homeland and displacement, and we adhere to the right of return to the land of Palestine, and we wished His Excellency and the Lebanese state to look positively at some of the human rights requirements of our people in the camps, especially since there is a significant decline in the services provided by UNRWA to the Palestinian camps.

For our part, we congratulated His Excellency the President, the Lebanese state and the Lebanese people on the achievement of the parliamentary elections and the electoral entitlement, and we wished Lebanon stability, security and well-being, because Lebanon’s strength and stability is a strength for Palestine and support for the resistance in it.

We also affirmed our full solidarity with Lebanon in the face of Israeli harassment on the borders. We asserted that the Israeli is a usurper of Palestine and the arms of this occupation have no right to extend to any Arab country, nor to Lebanon and its full right to its natural resources, oil and gas.

The President refuses to describe the resistance as terrorism, as long as it is a resistance against the occupation. We expressed our very high appreciation to His Excellency, and we always wish him health and wellness, and for Lebanon security, stability and more unity”.